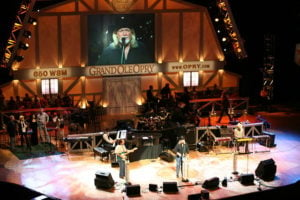 The musical creations from Broadway St. in the Manhattan Borough of New York City have come a long, artful way in their scope of inclusion. There are ones based on the songwriting artists, and then ones with stories made from the songs of the artist.

Jukebox musical is the new, catchy name for these productions. Ring of Fire based on music by Johnny Cash and Movin’ Out based on music by Billy Joel are written as stories of regular people. A biographical, popular musical is Jersey Boys based on Frankie Valli and The Four Seasons. In fact, The Go-Gos just came out with their addition. But, I’m here to root for a musical based on the music of Mel McDaniel. Who? That’s right…I said it, Mel McDaniel.

This mostly 1980s country music star has so many beautiful, story form songs that I think a musical should be in the works to honor his art. Or, maybe at least, I expect a Mel McDaniel song to make an cameo in a Quentin Tarantino movie.

McDaniel, from Oklahoma, made it to Nashville and signed with Capitol Records in 1976 after he earned stripes playing his guitar in Alaska for a couple of years to mostly oil field workers. By 1986, he was a semi-regular playing on the Grand Ole Opry. He was mostly known for writing happy and romance related songs, rather than about broken hearts and tragic things. He died in 2011.

I kind of think of Mel McDaniel as outlaw country music in the vein of Willie Nelson, Waylon Jennings and the Boys. But, it is up for dispute whether he is considered there in that genre by the experts. Should he be mentioned among the greats, it would depend on who you ask, of course. He even went gospel on some songs. Let’s let you decide after we take a look at his top 10 songs.

With some obvious Jerry Lee Lewis influence, McDaniel gets super picky with his guitar on ‘Take Me to the Country.’ McDaniel sings of a lady taking him to the country tonight, which really means taking him to her home. It’s a great metaphor for hooking up with a woman.

McDaniel’s songs radiate with fun even when he takes on a serious topic. ‘Preaching Up a Storm’ is all about sermons down by the river. McDaniel talks about his body trembling with fear and washing sins away. The song is from the perspective of a boy. He mentions he was only eight years old when he heard them singing about peace in the valley.

McDaniel was known for a ballad or two, for sure. His are elegant, thoughtful, and beautifully orchestrated with his music and lyrics. Some won’t be making this list, but deserve to be mentioned. Those are ‘Right in the Palm of Your Hand’ and ‘God Made Love.’ This one is called ‘I Call It Love.’ It’s heavy on the harmonica in the beginning. The harmonica was always a go-to instrument for his band.

Have you ever thought of what makes a feel-good song? Try this one by McDaniel. It’s actually called ‘Real Good Feel Good Song.’ I guess McDaniel knew it was a hit because there is a pretty good video to match the song’s lyrics that partly stars a well-trained golden retriever. The band’s brass section stars in alongside the guitars and keyboard. And, McDaniel knows how to gravelly with his voice when he has to in order to make his point as a singer.

Country music has plenty of its eccentrics in the genre. I consider Mel McDaniel as definitely one of those, and he proves it with ‘Big Ole Brew.’ It’s not as hefty as ‘All My Rowdy Friends’, ‘Whiskey River’, ‘Friends in Low Places’ or ‘Family Tradition’, but it’s a cut above. There’s that harmonica again getting things started off, and the guitar picking continues. With the story form lyrics, it’s a tremendous song.

Clapping to McDaniel songs is hard to avoid. It’s just what one does when one hears most of his songs. ‘I Wish I Was in Nashville’ is no different. This song shows reverence to Nashville as the Mecca for country songs, as many others have done. McDaniel’s entry is one that forever continues to thrust the Tennessee city into the limelight. It’s complete respect for the music genre and the town where much of it got its start.

Here we go again with the Jerry Lee Lewis influence, or maybe it’s a Little Richard influence. McDaniel can’t resist it because his first inclination is to want to go upbeat with his songs. His feel-good personality resonates in every one of his songs. He is a historic American music songwriter and artist. He finds plenty of places in the song to feature guitar riffs, as well as piano action.

This is a classic song. ‘Stand Up’ brings us in as listeners with tremendous story form lyrics, guitar picking and guitar licks with twangs. A constant drumbeat to keep us clapping and female backing vocals for the chorus keep us engaged all the way through this epic one.

This is a rollicking song that brings us all together. When McDaniel says ‘You get down the fiddle and you get down the bow, kick off the shoes and throw ‘em on the floor’, we know this is a song about dancing and having a good time. The fiddle influence here reminds us of Charlie Daniels and his band.

McDaniels biggest hit has a hint of pornographic thought to it with clothes on. He uses his story form lyrics well describing how ‘Baby’s Got Her Blue Jeans On.’ Plenty of synchronized ‘Oooh Oooh’ backing vocals are placed alongside as McDaniel describes with pinpoint accuracy what happens “Naturalleeeeee.” He says it’s not her fault, and the guitar picking fits naturally, as well.