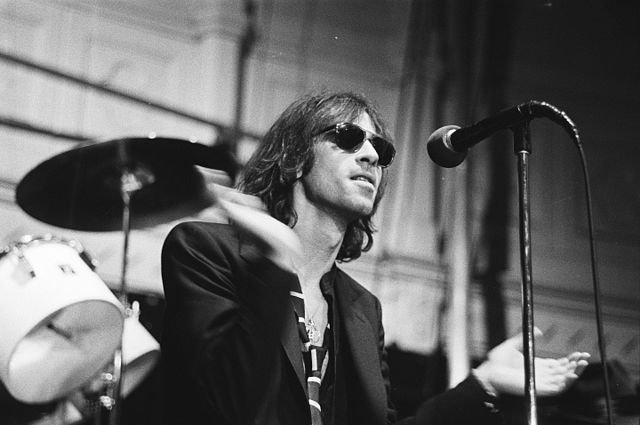 Our Top 10 Peter Wolf Songs list presents the great songs of Peter Wolf recorded throughout his amazing solo career. This top 10 Peter Wolf songs will not include any of the material Peter Wolf recorded with the J. Geils Band. Those songs have been included in the Top 10 J. Geils Band songs article we already published. Peter Wolf  served as the lead vocalist for the J. Geils Band from 1967 to 1983. The band’s album Freeze Frame released in the early 1980s was a massive hit that would feature the J.Geils band in constant rotation on MTV. However, Peter Wolf and the band couldn’t agree on the group’s direction from that point on, so Wolf left the band to embark on a solo career.

Peter Wolf released his first solo album in 1984 entitled Light’s Out. He followed up that album three years later with the fantastic record Come as You Are. Peter Wolf would release six more album with his latest entitled A Cure for Loneliness released in 2016. He has had two top 20 hits on the U.S. Billboard Hot 100 as a solo artist and a number one single on the Billboard Mainstream rock tracks charts. Our top 10 Peter Wolf songs list presents ten of our favorite Peter Wolf songs released on his solo albums. There’s some pretty good stuff here……..

We open up out top 10 Peter Wolf songs with a track from the album Lights Out. This amazing album featured an all star cast of musicians and legendary music artists including the Rolling Stones legendary lead singer and one of the greatest musical artists of all time Sir Mick Jagger. Peter Wolf employed some of rock’s most gifted guitar players including King Crimson’s Adrian Belew, The Car’s Elliot Easton, the brilliant Will Lee, Hall & Oates ex guitarist and Saturday Night Live band leader G.E. Smith and many more talented musicians. The song “I Need You Tonight,” defines the sound of the early 1980s in the video below.

At number seven on our top 10 Peter Wolf songs list is the tremendous track “Long Line.” The song also served as the title track to Peter Wolf’s Long Line album that was released in 1996. The song “Long Line,” was placed as the album’s opening song. It was also released as the first single from the album.

This is just one of those great songs that makes you feel good. That’s what Peter Wolf’s brand is all about. Featuring Mick Jagger also on vocals, this was one of the standout tracks on Peter Wolf’s debut album Lights Out.

At the halfway point on our top 10 Peter Wolf songs list we turn to the great track “Tragedy.” The song was recorded with the wonderful female vocalist and artist Shelby Lynne. The song was released on the album Midnight Souvenirs. The album was issued in 2010. The song “Tragedy,” was written by Peter Wolf and Angelo Petraglia.

As we begin to wind down our top 10 Peter Wolf songs list, we present the title track to Peter Wolf’s debut album entitled Lights Out. The album was released in 1984. The single “Light’s Out,” became Peter Wolf’s highest charting single of his solo career when it hit number 12 on the Billboard Hot 100 in 1984. There was a lot of competition in 1984 for the top 10 with artists like Bruce Springsteen, Madonna, The Cars, Prince  and many others all celebrating massive success with career defining albums. So it was pretty impressive how Peter Wolf stacked up against the competition.

We close out our top 10 Peter Wolf songs with the great song “Come As You Are.” The song was released on Peter Wolf’s second solo album also titled Come As You Are. We could easily argue this was Peter Wolf’s most successful solo song as far as chart success goes. Even though it did not rank as high as “Light’s Out,” did on the Billboard Hot 100, it still became a top 20 hit peaking at number 15. However, the song exploded on the Billboard Mainstream rock tracks hitting number one in 1987.