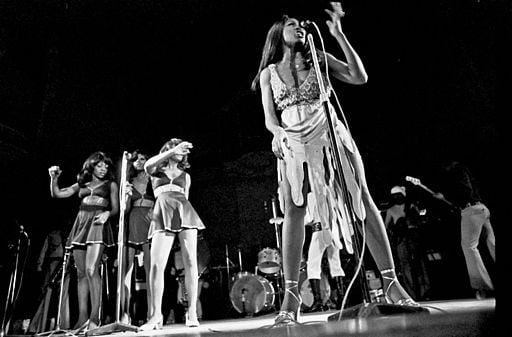 Our Top 10 Tina Turner Songs list looks back at the legendary career of one of rock and roll’s most exciting vocal performers. Tina Turner’s career can be split into two parts. Her years with her husband Ike Turner and her solo career after she split from the very abusive relationship she had endured with Ike Turner for many years. This top 10 Tina Turner songs list will focus on just the materiel released on Tina Turner’s solo albums. So please don’t ask us why we did not include “Proud Mary,” on this list. That will be included on the Ike and Tina Turner songs list. For now, this one is all about Tina. While her first pair of solo albums were released while she was still with Ike Turner, songs from those albums were included on this list.

We open up our Top 10 Tina Turner songs list with her great versions of The Who’s “Acid Queen.” We used the plural of the word version because Tina Turner recorded two studio versions of the classic Peter Townshend song. Tina Turner’s initial version that most of us heard for the first time appeared on the soundtrack to the motion picture Tommy. Her performance in the film was off the charts and a bit unsettling for many of us who saw it at a very young age and had no idea was was going on.

Tina Turner’s single “We Don’t Need Another Hero (Thunderdome)”  served as the first single released after the success of the most successful album of her career entitled Private Dancer. “We Don’t Need Another Hero (Thunderdome)”  was released as a single from the soundtrack to the motion picture Mad Max Beyond Thunderdome. It was a film that also starred Tina Turner along with Mel Gibson. In 1985, Tina Turner was one of the biggest stars in the world and this was very reflective of her stardom at the time.

Goldeneye is the third of three songs on this Tina Turner songs list that are directly tied to motion pictures. A point that clearly defines the power of Tina Turner’s mass cultural acceptance. Tina Turner’s Goldeneye hearkens back to the style of the late 1960’s James Bond theme songs. Goldeneye was released in 1995. The song was written by Bono and Edge of U2.

In 1984 Tina Turner Released her Private Dancer album. The album became easily the most successful album of Tina Turner’s career. Furthermore, while some hailed it as a comeback album, in more definite terms, it was a record that showcased the empowerment of a woman who had overcome a horribly abusive relationship with her ex husband Ike Turner. It was a record that catapulted Tina Tuner to a level of mass stardom that has lasted ever since. There were so many big time hits off the Private Dancer album. The album was so good, it made it difficult to narrow down which ones to pick for this Top 10 Tina Turner songs list.

We start out our songs from the Private Dancer album with the record’s second biggest single release. The song “Better Be Good To Me,” hit number five on the Billboard Hot 100 in 1984. The song also won Tina Turner a Grammy Award for Best Rock Vocal Performance, Female.

The sound of 80s big time keyboard orientated production is on full display on this great Tina Turner track. The song was released on her very much anticipated follow up album to Private Dancer entitled Break Every Rule. The album was released two years after Private Dancer in 1986. The song “Typical Male,” was the first of eight singles released from the album. The song was a huge hit in the United States as it reached all the way to the number two position on the U.S. Billboard Hot 100 in 1986.

The song “Let’s Stay Together,” was the first single released from Tina Turner’s Private Dancer album. While the song was not the album’s biggest hit, it did serve as the catalyst for fueling interest in the album that resulted in Private Dancer becoming the biggest album of Tina Turner’s career. The song “Let’s Stay Together,” was also a well known song recorded by Al Green in 1971 who had a number one hit with the record.

1984 was an incredible year for music. Fans celebrated huge rock and pop albums like Bruce Springsteen’s Born in the U.S.A., Prince’s Purple Rain, The Cars’ Heartbeat City, Van Halen’s 1984 and so many more. However, in the middle of all those great albums and singles, Tina Turner’s Private Dancer album gave them all a run for the money. Even more impressive was the success of the album’s third single entitled “What’s Love Got To Do With It.” The song became Tine Turner first and only number one record.