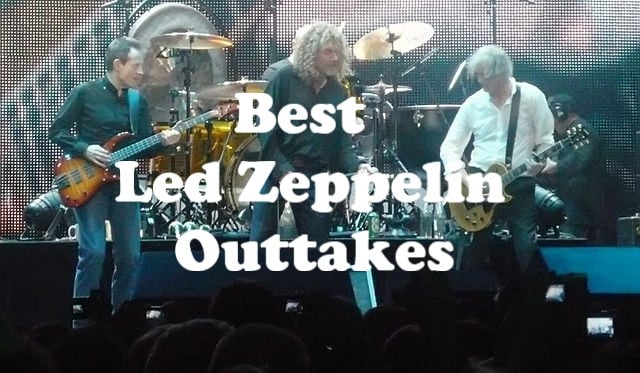 Led Zeppelin was not a band that recorded a great deal of material that they left unreleased. There are multiple reasons for this. First and foremost was the simple fact that they did not have a long recording career due to the tragic passing of John Bonham in 1980. Led Zeppelin released their first studio album in 1969 entitled Led Zeppelin and their last in 1979 entitled In Through The Out Door. Over a ten year period, the band released ten albums. Ten freaking magical albums that defined the career of the greatest rock band of all time.

One of the other reasons Led Zeppelin did not leave behind a lot of unreleased materiel according to Jimmy Page was they put most of the stuff they recorded for each album onto the albums. The band released almost an album a year and did some major touring, so they did not have a lot of time to spend on each album. There were also many other personal issues like any band or artist or human being has that we will not get into here that did however seem to affect their output.

Led Zeppelin was not a singles band. They only released eleven singles during their ten year run. Only one of them made it to the U.S. Billboard top 10. But who cares. Led Zeppelin was an albums band. It was all about their complete albums. It was about their live shows, it was about every great song on every brilliant album they released. Nonetheless, when a band does not release that many singles, there’s less of a chance for unreleased b sides to make it onto those singles. In Led Zeppelin’s case, it only happened once. Their only unreleased b side was the great track “Hey Hey What Can I Do,” which was the b side to the “Immigrant Song,” single released in 1970.

During their initial run the band released no greatest hits albums, no compilation albums and only one live album which the band always argued was a soundtrack album and not an official live album. Even after the band stopped recording, Atlantic records was very slow at releasing any sort of compilations. The Coda outtakes album was released shorty after the passing of John Bonham but that was about it. Most Led Zeppelin fans were not initially happy with Coda when it was released. The 1980s saw the entire Led Zeppelin catalog released on very poor sounding CDs.

It was not until the 1990s when Atlantic Records started to release Led Zeppelin compilation sets that we began to hear Led Zeppelin Outtakes. Most of the releases were remastered catalog albums that sounded a little better than the 1980s masters. There were a few box sets and and various compilations, Once again there were was not much unreleased stuff issued with just a few exceptions. It was not until 1997 and the release of the BBC Sessions that Led Zeppelin fans were presented with some really nice unreleased materiel.

The next series of great Led Zeppelin releases that contained the most unreleased Led Zeppelin material ever issued occurred when Jimmy Page once again remastered the entire catalog in the 2010s. However, this time, Atlantic Records released each album with a companion disk of unreleased tracks from the catalog albums. Most of the unreleased tracks were rough mixes, alternate mixes and other variation of songs. Even the 1997 BBC Sessions Two CD set was released in a remastered version with an extra disk. These CD reissues released in the 2010s contained a vast amount of unreleased materiel. The two that stood out the most was Led Zeppelin I which contained a live Led Zeppelin concert on the companion disk and the new version of Coda which contained the largest amount of unreleased materiel which made sense because Coda was originally an outtakes album.

We open up this Led Zeppelin Outtakes list with the classic outtake “Jennings Farm Blues.” This one was pretty popular among Led Zeppelin fans, Couldn’t leave this one off. This is the rough mix version found on the Led Zeppelin III remaster.

We continue this Led Zeppelin Outtakes list with a live version of “The Ocean.” This was an outtake from the 1976 The Song Remains The Same soundtrack. It was released on the 2007 CD version of the Soundtrack

This very cool instrumental track was released on the 2014 deluxe edition bonus disc from the Led Zeppelin III album.

The track “Ribs & All / Carrot Pod Pod,” was released on the 2015 deluxe edition bonus disc of Led Zeppelin’s Presence album.

Led Zeppelin great debut album Led Zeppelin I was reissued in 2014 with a bonus disk that contained a live 1969 concert form the Olympia Theater in Paris, France. The live recording of “White Summer / Black Mountain Side,” was from this show.

The great reissue of Led Zeppelin outtakes album Coda had some really good stuff on the 2015 issue. “Baby Come On Home,” had originally appeared on Led Zeppelin’s 1993 Box Set. However it sounded better on the 2015 Coda remaster.

First released on the 1997 BBC Sessions 2 CD set. This one blew us all away.

This fantastic mix of Rock and Roll was also part of the 2018 Record Day special release.

Led Zeppelins recording of “Sugar Mama,” is one of our favorite rare Led Zeppelin gems. This version was released on the 2015 deluxe issue of Coda .

Robert Plant is amazing on this great track that was heavily bootlegged over the years. This version of Sunshine Woman was released on the remastered BBC Sessions CD.

There was never any doubt that this great Led Zeppelin songsreleased as a b side in 1970 would stand in the number one position on our best Led Zeppelin outtakes list. I still remember the day I brought this single in the 1970s and flipped it over and heard this great song. Moments like that you never forget.