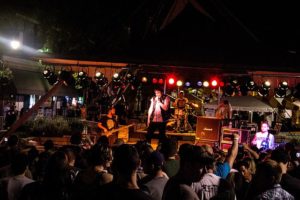 Our top ten Trapt songs list looks at the work of an American rock band from California. They first formed in 1995 initially as a NOFX covers band before reforming as an original act where the line-up consisted of vocalist Chris Taylor Brown, guitarist Simon Ormandy, bassist Peter Charell and drummer David Stedge. They began playing local shows in their area while they were all still in high school, where they even supported bands such as Papa Roach. They recorded their debut album Amalgamation in 1999 which they distributed themselves at their live shows.

In 2001, they signed with Warner Bros and released their first proper album which was self-titled in 2002. By this point David Stedge had been replaced by Robin Diaz. Three years later they released their second album Someone In Control. This was followed by Only Through The Pain in 2008. By this point, Simon Ormandy had left and had been replaced by Robb Torres. There were rumours that Ormandy had been fired from the band, which they denied and stated that he had left of his own accord. Later that year they joined Motley Crue’s “Crue Fest” tour which also featured Papa Roach, Buckcherry and Sixx: Am.

In 2010, Trapt released their fourth album which was titled No Apologies and was produced by Johnny K who is known for his work with various metal bands. They followed this three years later in 2013 with their fifth album Reborn. In 2014, they released their early releases which had long been out of print. In 2016 they released DNA which was their least successful album to date, only reaching 148 on the Billboard 200. Their most recent album Shadow Work was released in 2020. This album was even less successful, completely failing to enter the Billboard 200, selling only 600 copies in its first week. This drop that the band’s popularity has taken is likely due to controversial comments that Chris Taylor Brown has made on social media over the last couple of years, which many people have considered to be offensive.

Here is a list of the ten best Trapt songs.

Kicking off our top ten Trapt songs list is this track taken from their sixth album DNA released in 2016. The album was partially funded by a campaign that the band launched on the platform Indiegogo. The album was originally set to be released in 2015. It was the band’s first record not to reach the Billboard top 100 and it sold poorly, shifting only 4,500 units.

Our next track is from the band’s fifth album Reborn released in 2013. It was produced by the band’s vocalist Chris Taylor Brown. This track was the second single to be taken from it. The record received mostly positive critical reviews and was their fifth album to reach the Billboard Top Fifty where it got to number forty-four.

Next up is this track taken from the band’s fourth album No Apologies released in 2010. The album reached number twenty-five on the Billboard and this was the first single to be released from it. Critics praised the album for its heavier direction and the fact that it did not have the pop elements of the earlier records.

Next on our top 10 Trapt songs list is this spectacular song taken from the third Trapt album Only Through The Pain released in 2008. The record is among the band’s most successful, reaching number eighteen on the Billboard Charts. This song has a more melodic sound to it, bordering on pop punk. It is very catchy and has an emotional feel to it.

Ending the first half of this list is this song which was one of the singles to be taken from the band’s second album Someone In Control released in 2005. When it was released it debuted on the Billboard charts at number fourteen. Despite the album being a highly anticipated release due to the success of their first record, it ultimately was not as successful due to none of the singles being a big hit.

Kicking off the second half of this list is the debut single from Only Through The Pain. It reached number eleven on the Billboard Hot Mainstream Rock Chart. It is also available as downloadable content on the Rock Band series of video games. During the year of its release in 2008, it was also featured on an episode of the Reality TV series Cheaters.

This track is the debut single from Someone In Control. The song is often played at the Air Canada Centre before hockey games played by the Toronto Maple Leafs. The inspiration from the song reportedly came from when the band were frequently getting emails from people telling them that they been physically assaulted and had not done anything about it. It got to number seventeen on the Modern Rock Tracks and number three on the Mainstream Rock Charts.

At number three is the third and final single from the band’s self-titled debut album released in 2002. There are two slightly different versions of the song. One is classed as the “production edit” which is the version that is played more often and the other is the slightly longer full version. The former is the version that appears on the album while the latter is the single version. However, some versions of the album contain the longer version. The only real difference is that the full version contains a slightly longer bridge.

Just off the top spot is the second single from the first album. When it was released in 2003, it was a hit on rock radio stations and topped the Billboard Hot Mainstream Rock Charts. It also reached sixty-nine on the mainstream Hot 100. The album is the band’s most successful record, getting to number forty two on the Billboard 200 and remaining on there for a year and a half.

Topping our Trapt songs list is the debut single from the debut album. It got to number one on both the Modern Rock and Mainstream rock charts as well as number sixteen on the Billboard Hot 100. It even had success in the pop charts where it got to number four on the mainstream rock top forty. It also won two Billboard awards for Best Rock Track and Best Modern Rock Track. It was rated the most successful American rock song of 2003 as well as of the 2000’s decade.