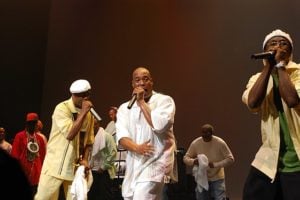 Formed in 1982 out of Brooklyn, New York, is the hip-hop group known as Whodini. Founders Jalil Hutchins, John Fletcher, and DJ Drew Carter formed their trio as one of the hip-hop groups to fuse the R&B style into their music. This is ultimately what bred a new music genre of its own, now commonly referred to as the new jack swing. The band’s trademark of producing good-natured songs also had had Fletcher parade with a Zorro hat and the persona of Ecstasy. Carter is also otherwise known as Grandmaster Dee for his record-scratching contribution to the lyrical performances laid out by Hutchins and Fletcher. During their live performances, Whodini also featured dancers as a means to add more hype to their concerts to encourage the audience to get caught up in the action.

Of the six studio albums Whodini released, three of them became certified by the Recording Industry Association of America. Their self-titled album was released on October 13, 1983 as the trio’s official debut to the music industry, which was then followed by the platinum-certified Escape on October 17, 1984. 1986’s Back in Black and 1987’s Open Sesame both became certified gold not long after they were released. Bag-a-Trix was the fifth studio album, which was released on March 19, 1991, and the final album, Six, was released on September 17, 1996. From that point forward, there were no further album recordings, but the band continued to tour as a trio until the death of John Fletcher on December 23, 2020.

Among the most soulful performances from Whodini, “Growing Up” displayed the trio’s musical talent at its best. While it only achieved a US Billboard Hot R&B/Hip-Hop Songs chart ranking of fifty-eight, it was still regarded as one of the best of its time. Laurence Fishburne was featured as a drug dealer in the music video, which served as a visual intro to the song’s message of how part of growing up is about making some tough decisions that can affect how one’s life may become as an adult.

In 1996, the final single released by Whodini came from their sixth album, Six. “Keep Running Back” appeared on the US Billboard Hot Rap Songs at number twenty and at number sixty-nine on the US Billboard Hot R&B/Hip-Hop Songs chart. Soft, rhythmic, and heavy with soul, Keep Running Back witnessed a maturing trio of artists who’ve come a long way since they first rapped their style onto the music scene. This song is the very definition of what new jack swing was always meant to be.

From Whodini’s second studio album, Escape, “Big Mouth” was a smooth, minimalistic single that relied on an R&B delivery rather than going all out with heavy sounds. This synth-heavy hip-hop featured beats and backup claps that heightened the song’s message about what the musical trio thought about rumor mills and the people who start them.

#7 – The House of Haunted Rock

On the US Billboard Hot R&B/Hip-Hop Songs chart, “The House of Haunted Rock” peaked at number fifty-five. On the US Billboard Dance Club Songs chart at number twenty-seven. The humorous, yet spooky arrangement from the song was inspiring enough to appear on the 1986 comedy-horror film, Trick or Treat and its soundtrack. At dance clubs, themed parties, and retro-style radio stations have played The House of Haunted Rock as a means to heighten the playful mood of Halloween.

The first single from Whodini’s first album was, “Magic’s Wand.” On the US Billboard Hot Dance Club Songs, it peaked at number eleven while appearing at number forty-five on the US Billboard Hot R&B/Hip-Hop Songs chart. The speedy pulse of the rap attack at the start of the song grooved into an educational comedy that revolved around the influence hip-hop artists and rap musicians were having on the entertainment industry.

“Freaks Come Out at Night” was one of Escape’s singles, which was a song that behaved like a raunchy party song with the primary intent to stir up the dance floor. On the US Billboard Dance Club Songs chart, Freaks Come Out at Night climbed up to number twenty-five. The US Billboard Hot R&B/Hip-Hop Songs had it at number forty-three. From Whodini’s discography, Freaks Come Out at Night has been featured on a number of Hollywood productions, including soundtracks, ever since it was first released in 1985. During the timing of Halloween, this song still remains one of the favorites to play from dance clubs, radio stations, and theme-specific parties.

“Funky Beat” peaked at number nineteen on the US Billboard Hot R&B/Hip-Hop Songs chart and at number thirty on the US Billboard Dance Club Songs chart in 1986. The raunchier style began to dominate the hip-hop and rap music genres as of the mid-80s. Funky Beat was considerably speedier than the trio’s previous work. This song’s music video featured Malcolm Jamal Warner, who played Theo Huxtable from the highly popular 80s The Cosby Show, which added even more popularity to it. Funky Beat was also credited for the introduction of the underground music scene that thrived on the competitiveness of rappers striving to outperform the others for bragging rights.

Released on April 29, 1986, Back in Black, produced the hit single, “One Love,” which charted as high as number ten on the US Billboard Hot R&B/Hip-Hop Songs chart and at number thirty-four on the US Billboard Dance Club Songs chart. When the echo of lyrics met with rhythmic hip-hop in adult contemporary style, One Love became the popular result.

While on Whodini’s second studio album, Escape, the synth-heavy “Friends” was a rap song with a failed romance storyline that was placed on the B-side of the trio’s album. Despite this, it served as the first of two songs that played in sequence on certain radio stations that placed Five Minutes of Funk behind it. Played separately, they’re both great songs on their own. When Friends charted on the US Billboards, it was number four on the Hot R&B/Hip-Hop Songs chart, number twenty-five on the Dance Club Songs chart, and at number eighty-seven on the Hot 100.

Originally, “Five Minutes of Funk” was supposed to be a rock-style single, but Whodini opted to favor a rhythm and blues approach instead. Merging this song with the hip-hop music that was more commonly referred to as rap at the time, is what prompted the new jack swing movement to pick up steam in the entertainment industry. At the timing of its release, it served on the radio stations as the second half to the song, Friends, in a similar manner to the parallel songs of Queen’s 1977 We Will Rock You meshing with We Are the Champions. On the US Billboard Hot R&B/Hip-Hop Songs chart, it peaked at number four. The US Billboard Hot 100 charted it at number eighty-seven. The style of Five Minutes of Funk also earned a spot on the US Billboard Dance Club Songs chart at number twenty-five.