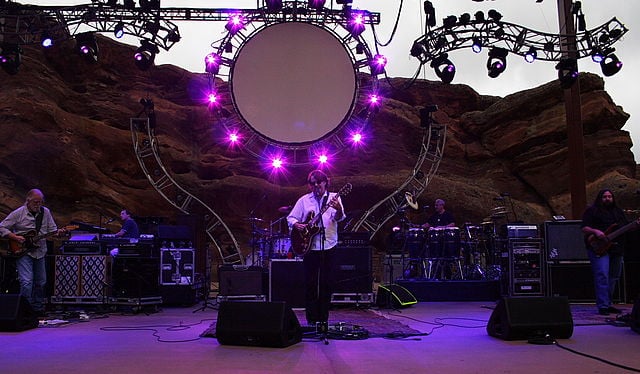 With our top ten Widespread Panic songs list we look at ten of the best of one of the longest running and criminally overlooked bands in Rock music. Having been active since the 1980’s, Widespread Panic’s music is a unique mix of Southern Rock, blues, progressive rock, funk and hard rock. They are well known for their eccentric live shows, which never contain the same setlist and are put together during the day before the show.

Although the origins of the band date back as far as 1981 when several of the members met and started playing with each other, Widespread Panic was officially formed in 1986. After releasing their debut album in 1988, they rose to national attention over the next few years, with their second self-titled album being their major label debut.

After being well established as a touring and recording outfit over the next decade, the band found themselves at a tragically crucial point when guitarist and founding member Michael Houser died of cancer in 2002. Rather than calling it a day however, they decided to carry on and replaced Houser with George McConnell who would only be with the band for three years before leaving in 2006.

McConnell was replaced by Jimmy Herring who has been with the band ever since. However, in 2016 another founding member, drummer Todd Nance left and then subsequently died in 2020.

Widespread Panic’s back catalogue is a very interesting one and they have been a consistent band throughout their four-decade career. Their following includes many fans from bands like The Allman Brothers Band, The Dave Matthews Band, Moe, and many other great jam style bands. Although they have always been somewhat outside of the mainstream, in many ways this has led to flourish creatively and still maintain cult success.

So, without further ado, let’s look at this band’s ten best songs….

Kicking of our top ten Widespread Panic songs list is the title track from their tenth album released in 2008. This record was produced by Terry Manning at Compass Point Studios located in the Bahamas. This album was also the debut of Jimmy Herring on guitar who had joined the band a year previously. Its highest chart position was number eight on the Billboard independent charts.

Next up on our Widespread Panic Songs list we have a very adventurous entry in the Widespread Panic back catalogue with this eleven-minute number which is the opener of the band’s ninth album Earth to America released in 2006. Here is a track that perfectly throws all of the different elements of Widespread Panic into one big melting pot, being rocking, bluesy, progressive, and funky all at the same time. The album got to number eight on the Billboard Tastemaker charts.

And here we have an even longer track at sixteen minutes which is the closer of Widespread Panic’s eight album Ball released in 2003. This record was the first with John McConnell on guitar who replaced founding member Michael Houser who died the previous year and who wrote this song. This was a record that brought in a lot of change for the band. Not only was it the first album composed entirely of songs that fans had never heard before, but it was also the first not to contain a cover song. It reached number sixty-one on the Billboard 200.

At number seven on our Widespread Panic Songs list is the title track and closing number of Widespread Panic’s seventh album released in 2001. The album featured many different styles, and this song is one of the more accessible in WP’s catalogue, being quite a straightforward indie-folk number. It reached number fifty-seven on the Billboard 200.

Next up is the closing number and partial title track from Widespread Panic’s twelfth and most recent album Street Dogs released in 2015. This is the first album ever not to feature Todd Nance on drums although he was involved in the writing of all of the songs. On drums is Duane Trucks who was not an official member at the time but would later be instated as one in 2016.

At number four is the title track of Widespread Panic’s fourth album released in 1994. The album was relatively commercially successful, getting to number eighty-four on the Billboard 200 which was due in part to a couple of other songs on the album receiving minor radio airplay. They notably performed this song at Moorhouse College which was broadcast on Good Morning America.

At number three is track number three from album number three released in…1993! The debut WP record of keyboard player John Hearman, it got to 184 on the Billboard 200 chart and ten on the Heatseeker chart. The record was recorded in 1992 at Muscle Shoals Sound Studios located in Sheffield, Alabama.

Just off the top spot is a song taken from Widespread Panic’s self-titled second album released in 1991. For many years after the record’s release, there was a rumour that this track was a tribute to Cliff Brown Jr .who was a fellow Alabama native and the singer for Tuscaloosa band The Echoing Green. This rumour continues to be debated despite the fact the Brown put it to bed in a 2004 interview with the Tuscaloosa News.

Topping this Widespread Panic Songs list is the title track of the band’s debut album released in 1988. The album has been reissued several times and the original pressing notably did not include the live favorite “Conrad” due to timing constraints. For its twentieth anniversary, Widespread played the original version of the album in its entirety in 2008 in Denver, Colorado. Two years later they would play the reissued version of the album in full.