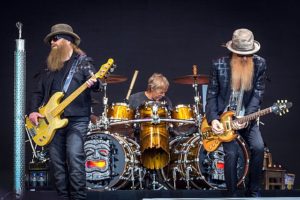 For 51 years, ZZ Top were three men, two beards, and a whole lot of Southern-fried attitude. They rocked, they rolled, and they dished up plate after plate of the perviest grooves and lewdest blues you could ever have the privilege of getting down to. Then Dusty Hill upped and died on us, leaving us a beard down and in desperate need of some good old Southern comfort. The good news is that the band will still be continuing with Hill’s guitar tech Elwood Francis. The even better news is that we have five decades and 15 studio albums, four live albums, and seven compilation albums to reflect on. These, in our opinion, are the best.

1985’s Afterburner might be best known for “Can’t Stop Rockin'” (the only redeeming feature of “Teenage Mutant Ninja Turtles III”) and it’s No.1 smash-hit “Sleeping Bag,” but there’s more going on here than just the obvious. Their decision to let their signature holy trio of guitar-bass-drums take a backseat to mechanized drums and computerized loops may have drawn some raised eyebrows and a few harsh words, but you’ve got to give them credit for keeping up with the times… or at least, trying to. If you can’t quite manage that, skip to “Woke Up” – with its lecherous lyrics and big licks, it’s old school ZZ Top of their best.

Some people really didn’t like Tejas. To the critics, it was a backward step that moved the band one step closer to irrelevance. It’s certainly got its lemons (the countryish “It’s Only Love” and jazz-inflected “Snappy Kakkie” are best avoided), but it’s also got some treasures, with “Arrested for Driving While Blind,” an irresistible ode to the pleasures (and pitfalls) of driving under the influence, standing out as one of the best. The lithesome “She’s a Heartbreaker” and hard-hitting “El Diablo” are also worth a listen.

In 2003, ZZ Top went back to doing what ZZ Top does best with the hard-driving, deliciously bluesy Mescalero. There’s no synths, no stylized production, and nothing to detract from the tantalizing combination of hard rock and Texan-born attitude. It’s too long and would be a much tastier dish with the fat trimmed off, but its back-to-basics approach and lusty attitude redeem it. For all the naysayers who’d said ZZ Top’s glory days were behind them, it was a slap in the face. For the rest of us, it was (and is) a damn good listen.

You can’t not love a band who calls their first album ZZ Top’s First Album. The band’s 1970 debut has a homegrown simplicity and just a touch of salaciousness. There’s a bit too much of the former and not quite enough of the latter to give it the edge on their later efforts, but it’s hard to fault the blues-drenched sauce of “Brown Sugar” or the southern-fried spice of “Just Got Back From Baby’s.” They’d end up making better, but what a way to say hello.

Fandango gave the band their first Top 40 single with “Tush.” It’s a great song, with a very convincing performance from Dusty Hill on lead vocals. But that’s not where the real magic is on this half-studio, half-live recording. It’s the deep cuts that make Fandango special – tracks like “Backdoor Medley,” a rabble-rousing slice of sheer deliciousness taken from a show in New Orleans, and “Heard It on the X,” another Hill performance that’s almost anarchic in its abandon. A more brutal critic would say it lacks cohesion and would have worked better as either a full live album or a more carefully edited studio LP. They might have a point. Even so, there’s still enough charisma and energy to keep things popping.

By the time ZZ Top got to their second album, they’d put any first-night nerves behind them. Rio Grande Mud is the sound of a band that knows its MO and isn’t afraid to deliver it. The trio’s confidence is obvious as they stride from one sizzling track to the next, introducing us as they do to the fast-buck troubadours and smoking hot mamas of their obsessions. There might be danger behind the words, but with a tracklist that includes “Apologies To Pearly,” “Just Got Paid” and “Bar-B-Q,” there’s no danger in them losing their groove.

By 1981, ZZ Top were seven albums into their career and still capable of surprising us. El Loco was the slickest, meanest thing they’d done so far, with a compelling balance between their signature sound of old and what would rapidly become the multi-selling, chart-topping sound of the future. The pervy delights of “Pearl Necklace,” foot-tapping joys of “Tube Snake Boogie,” and melancholic refrain of “I Wanna Drive You Home” are all familiar enough, but listen hard enough, and you’ll hear the faintest sound of synths. Change was most definitely afoot. It would be left to their next album to send their profile stratospheric, but the match was lit here.

After a three-year hiatus, ZZ Top returned to the studio to record their sixth album, The result, Degüello, proved that their time away from the spotlight hadn’t been wasted. Gibbons’s time in Europe and induction into the world of punk can be felt throughout the album, as can the trio’s growing fascination with technology. “Manic Machine” is a taster of the synth-heavy, over-the-top excesses of their 80s output. “Cheap Sunglasses” is as intriguing as anything they’d ever done. “I’m Bad, I’m Nationwide” is a rumbling joy. From start to finish, it’s a delight, and a very welcome return to form.

If the band had hinted at a change of direction on El Loco, Eliminator was where they stopped hinting and started spelling things out. This isn’t an album that simply embraces the modern age, it’s one that grabs it by the waist and snogs it. Songs like “Got Me Under Pressure,” “Sharp Dressed Man,” “TV Dinners,” and “Legs” would have been good anyway, but the sprinkling of electronics and technology makes them great. Obviously, it could all have gone horribly wrong. It was a departure, and if there’s one thing die-hard fans don’t like, it’s a departure. But for all the synthesizers, sequencers, and drum machines, it’s still fun, and it’s still ZZ Top. The old fans didn’t abandon them, the new fans embraced them, and Eliminator ended up selling more than 10 million copies. 40 years later, it still stands as one of their greatest ever achievements.

If there’s one album over all others that’s ensured ZZ Top’s legacy, it’s Tres Hombres. Billy Gibson once said “We could tell that we had something special. The record became quite the turning point for us.” He wasn’t wrong. Released in 1973, the band’s third album is, simply put, glorious. From the opening cries of “Have mercy!” on “Waiting for the Bus” to the closing “how how how” of “La Grange,” it’s gnarly and it’s nasty and it’s filthy as hell. This is the record that made them stars. Listen, repeat, then tell your friends. Three men and two beards have never sounded so cool