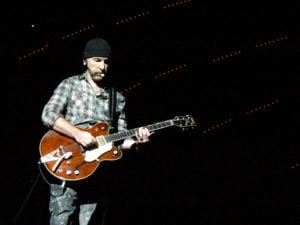 U2 fans will be very happy to hear that the band’s guitarist known to the entire world as The Edge has announced that he is working on new material for for a possible new album but is still unsure of where the new material may be headed. The Edge told Rolling Stone that he and the band’s bassist Adam Clayton were working on some new things. He stated that he was very much enjoying the writing and experimental process  while not having any pressure or expectations of what may come from the current writing process. It’s a little ambiguous, but  U2 fans will undoubtedly hope that the new material The Edge is talking about will wind up becoming a brand new U2 album.

The band has continued to release new material on a pretty continuous basis, so we have a feeling that the new material the Edge was talking about will undoubtedly turn into a new U2 Album, The band’s last album of new material was 2017’s Songs Of Experience. Since it has been four years since their last full length album was released, we are expecting this very prolific band to be releasing one in the not too distant future.

Even though its been a while since a complete album has been released, U2 have actually released some new music just recently. There is a brand new U2 song entitled “You Saved My Life,” that appears on the soundtrack to the animated film Sing 2. While the animated film has yet to be released the soundtrack to the film Sing 2 was released on November 14 2021.The film itself is not due to be released until December 22, 2021. In the animated film Bono’s voice is used for the character of Clay Calloway. The character depicts an old lion who was once a huge legendary rock star.

It’s a fantastic soundtrack that features many older U2 songs like “Where the Streets Have No Name,” Stuck in a Moment You Can’t Get Out Of,” and “I Still Haven’t Found What I’m Looking For.” The soundtrack also features songs by Elton John, Prince, Billie Eilish and others. The cast includes Tori Kelly, Matthew McConaughey, Reese Witherspoon, Scarlett Johansson, Taron Egerton, Pharrell Williams, Bobby Cannavale and Halsey.

We will keep our ears open for more comments by the Edge or Bono or any of the members of U2 regarding a new album. The Edge seemed pretty excited to be working on new music with Adam Clayton so its seems we may not have to wait too long.