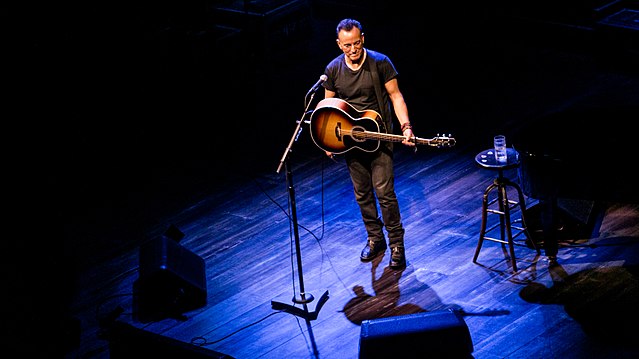 The Springsteen on Broadway shows we’re not just about Springsteen’s life it was about all of our lives. All of us who grew up with Bruce Springsteen became fans of his music in our teens and who just lived our lives aging with the man. His stories resonated with all of us. Stories about lost love. marriage and children. Stories about failure. Stores that all of us experienced in our lives at one time or another. That’s always what’s been so special about Bruce Springsteen’s music and his ability to connect to the spirit in all of us. To make us feel like he’s been talking to all of us, like he was singing about us. If you attended any of the original Springsteen on Broadway shows you would have noticed that there were many tears in those audiences throughout those nights. They were some of the most compelling shows that Bruce Springsteen ever put on before in his life.

Bruce Springsteen’s Springsteen on Broadway was not the first time he performed solo concerts. Throughout the course of his career, Bruce Springsteen has longed to separate from the E Street Band at certain times in order to perform as basically a troubadour. It began with his Nebraska album that he recorded on his own on just a basic 4-track recorder. Just guitar and voice presenting a set of stunning songs. However, Springsteen never toured as a solo artist to promote the Nebraska album. The mega million selling Born In The U.S.A. album it came out only a few years after that and all of his performances were in huge stadiums with the E Street Band.

Bruce Springsteen’s first involvement performing solo shows on a national tour began when he released the Ghost of Tom Joad album. In order to promote that album Bruce Springsteen chose to go out on the road with just his guitar and harmonica. In 1995 Bruce Springsteen performed in New York City at the Beacon Theater. For those of us who were lucky enough to score tickets to that show, it was amazing to see Bruce Springsteen performing in such a small theater after having seen him play at Giants Stadium in which he looked like an ant from the cheap seats. Even from the last row in the Beacon Theater in New York City it felt like we were still in the living room with Bruce Springsteen. It was such and intimate setting to hear hear him play songs like “Darkness on the Edge of Town,” and “Born In The U.S.A.” on an acoustic guitar in completely different stripped down arrangements. It was was just mesmerizing.

Bruce Springsteen did it one more time when he released the album Devils & Dust in 2005. 10 years after the release of the Ghost of Tom Joad Bruce Springsteen hit the road once again as a solo artist. This time it was different though. The Ghost of Tom Joad shows were in small Broadway style theaters. The Devils & Dust  tour returned Springsteen too much larger venues like the Nassau Coliseum and other indoor large scale arenas. We saw Bruce in that setting too, and it was far less intimate and not as effective. Although it still was a Bruce Springsteen concert and of course it was a great experience.