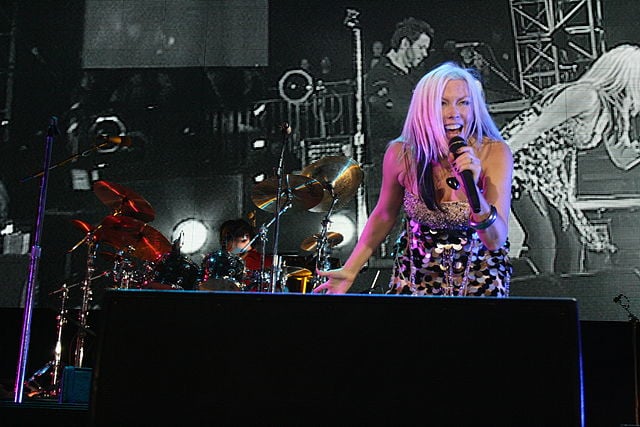 Our Top 10 Berlin songs lists looks back at the songs of a great Los Angeles based band that broke into the music scene in the late 1970s. The band would garner great success in the early 80s with their unique new wave techno sound that was fueled by a seductive beautiful lead singer named Terri Nunn. The group would become a household name in 1986 when they released the number one single “Take My Breath Away” from the motion picture Top Gun. Berlin consisted of Terri Nunn on lead vocals, John Crawford on bass, David Diamond and Matt Reid on keyboards and Rod Learned on drums.

We open up our Berlin Songs list with the track entitled “With The Lights On.” This is somewhat of a return to the earlier Berlin sound although Terri Nunn still sounds a bit  more like Kylie Minogue than her old self. Nonetheless, it’s a fun one to listen too, its an updated sound that echoes the dance music scenes of 2013, and who could complain about the cover of the Animal album.

Continuing with our Berlin songs list we turn back to the band’s Pleasure Victim album. The album was released in October of 1982. For most Berlin fans, the Pleasure Victim album remains their favorite, including this writer. The sound of those brand new synthesizers that were just coming on the market and that new wave techno sound that has flourished throughout the album was just so perfectly juxtaposed against the sensational vocals of Terri Nunn.

At the number eight spot on our Berlin Songs list is the great single “You Don’t Know.” The song was released on the Count 3 & Pray album. The record was released in 1987. “You Don’t Know” was the second single released from the album. It followed the lead single “Like Flames.” But both of those songs were completely overwhelmed by the success of the song “You Take My Breath Away,” which was also released on the Top Gun Soundtrack.

And speaking of the song “Like Flames.” This great Berlin song was one of the most epic songs the band had released in their career. This was a big sounding song that defined that Terri Nunn had the chops to sing anything. The song was released as the first single from the album  Count 3 & Pray. The song became a top 40 hit in the United Kingdom. It did not chart in the United States. The great music video for the song below was directed by Greg Masuak.

At number six on our Berlin songs list we hit the Count 3 & Pray album for the third time in a row. The song “Will I Ever Understand You,” was the album’s opening track. The song was never released as a single, but this is undoubtedly our favorite song on the album. The band and their record company knew it was a good one otherwise they would not have opened the album with it. Terri Nunn’s vocal is incredible on this one as she just makes you feel like your so wrong.

At the halfway point on our Top 10 Berlin Songs list we turn to the wonderful Love Life album for the first time. The album was released in March of 1984. It was the band’s third album and first LP for Geffen Records.It was the band’s highest charting album of their career in the United States where it hit the number 23 spot on the Billboard Top 200 album charts. The song “Dancing In Berlin,” was released as the third single from the record. “Dancing In Berlin’s,” epic arrangements were courtesy of the typical and great production of Giorgio Moroder and Richie Zito .

Continuing with our Berlin songs list we turn to the groups massive hit single “No More Words.” This great song was released on the album Love Life. It was issued as the album’s first single. “No More Words,” would become Berlin’s highest charting song at the time peaking at number 23 on the U.S. Billboard Hot 100. The song also appeared in the great Matthew Modine film Vision Quest. It was also released as the b side to the film’s hit single sung by Madonna entitled “Crazy For You.”

If you have never even heard of  Terri  Nunn or the band Berlin, chances are pretty high that you have heard this song. Berlin’s breathtaking song “Take My Breath Away,” was by far the most successful commercial song the band ever released. The success was fueled not only by the song being so beautiful and Terri Nunn’ stunning vocal performance, but it’s inclusion in one of the biggest motion pictures of all time in the film Top Gun. “Take My Breath Away,” would go straight to number one on the U.S. Billboard Hot 100 in the summer of 1984. Besides it chart success the song won two major film awards at the Golden Globes and Academy Awards for best original song in a motion picture. “Take My Breath Away,” was written by Giorgio Moroder and Tom Whitlock

While the next two Berlin songs come nowhere close to the success of  “Take My Breath Away,” these were the songs that first turned so many people onto the band. There is just something simple, yet so powerful in this great track “Metro.” It’s new wave techno at its finest. Its dark, mysterious and you just can’t get enough of songs like this sung by the esoteric Terri Nunn.

We close out our top 10 Berlin songs with the tune that turned us onto Berlin in the first place. The great track “Sex (I’m A…),” was released on the band’s first album Pleasure Victim in 1982. It was the album’s second single released after Metro. It broke the Billboard Top 100 and went all the way to number four in Canada. We listened to this one over and over again….with a smile on our face.