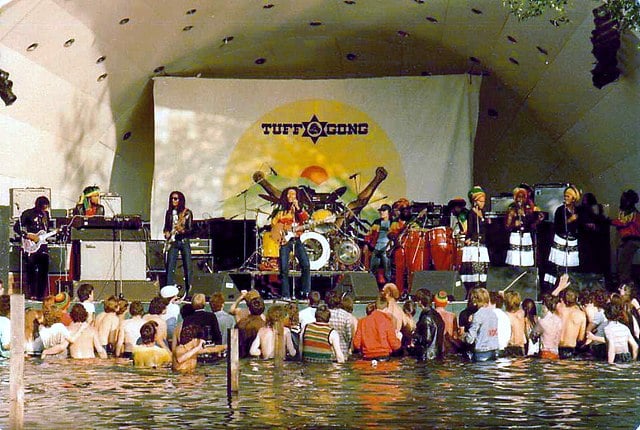 Owing to his astounding messages reflecting life hardships and rights violations, very few people can associate Bob Marley and The Wailers with much love (not for a nation, but a woman). At the end of a fight or struggle out there, every warrior heads home to his spouse. And Bob Marley and The Wailers never hesitated to show the world that the heroes at home are the women they all love. Released in Bob Marley and The Wailers’ Kaya album, many saw the soft side of this band with the song dedicated to Bob Marley’s wife, Rita Marley. It’s catchy hearing this reggae warrior spell out the words of love to his woman in his great vocals and some great instrumentals.

Featured in his 1980 album Uprising, “Redemption Song” is one of the greatest songs by Bob Marley and The Wailers, with its legacy running deep in the heart of reggae music lovers. And statistics can tell better having the song covered by over thirty-five artists, making it go down as one of the greatest jams. The acoustic piece was written by Bob Marley when he was diagnosed with cancer on his toe that would later take his life. “Redemption Song” found Marley at his most confessional moment in life, having him deal with his mortality while reinforcing his purpose of creating songs that aided spread the message of the oppressed. Time must have run short for him, but Bob Marley urges his believers to fight for their future.

Closing the first half of the top ten songs for Bob Marley and The Wailers is a hit song from their 1977 album Exodus. The song is one of Bob Marley and The Wailers’ popular songs, having it also covered by multiple artists. What makes life quite comforting for the oppressed than a pat on the back by this song? Thanks to the lyrical prowess invested that the song features some repetitive phrases in the chorus driving to no worry since everything will be all fine. The song would take on music charts having it trend all over the world, making a peak position of number 17 in the UK’s hard to climb charts.

What a therapeutic jam by Bob Marley and The Wailers from their 1978 album Kaya. “Satisfy My Soul” takes on the album’s relaxed and laid-back sound. Like most of the songs from this album, most of the fans criticized Bob Marley and The Wailers for going soft. However, while many were used to the militant style of the group, they just had to remember their need for love and calm for better peace of mind. “Satisfy My Soul” would go on to reach the top five in UK charts and staying the Billboard charts for ten weeks.

A reggae song from Bob Marley and The Wailers’ 1977 album Exodus, “One Love/People Get Ready,” remains to be one of the greatest songs ever written by Bob Marley. With the song comes an interpolation of The Impressions’ song “People Get Ready,” which was written by Curtis Mayfield. Thanks to the lyrical content of the song that it the song stayed on the Billboard’s Hot 100 for eleven weeks. It would also achieve a great response from music lovers having it appear in the top five charts in Italy, UK, Netherlands, and New Zealand.

“Could You Be Loved” was a hit song released on their album Uprising, having it written by Bob Marley while on a flight as The Wailers experimented on guitar. You ought to love the start of the song, having it feature some distinctive guitar riff and its distinct opening lines. The interpretation of the opening lines is interpreted by some as addressing the poverty and struggles the group witnessed in Brazil. However, the song feels like a disjointed prayer where bible verses are captured in Rastafarian themes. Notably, this ballad by Bob Marley and The Wailers was later used in several films, including Fool’s Gold, 5o First Dates, and I Love You to Death, among others.

Ushering us to the top three songs by Bob Marley and The Wailers is “No Woman, No Cry,” a song from Bob Marley and The Wailers’ 1974 album Natty Dread. The song’s title and main refrain actually mean “No Woman, Don’t Cry,” having it quite misunderstood by many non-Jamaican music lovers. Notably, the song tags Marley’s upbringing in Trench Town with his lyrics, both personal and political. Here Marley calls out the government and hypocrites while talking to a woman, telling her to cry, not reminding her of good moments. Quite emotional for most of the oppressed, not only the woman.

Despite a posthumous release, “Buffalo Soldier” remains one of the greatest Bob Marley and The Wailers’ songs to date. The song referred to the African soldiers who were dubbed Buffalo Soldiers owing to their dark and kinky hair. Marley cited the injustice served when the Buffalo soldiers were ordered to fight the Native Americans. The song was penned to track to reference all the soldiers who took on the battle for survival as well as black resistance. “Buffalo Soldier” would go ahead and become one of the group’s songs have it trend in music charts in the UK, Norway, Austria, and New Zealand after its posthumous release.

There is no better way to turn the spirit into action than through “Get Up, Stand Up.” Written by Bob Marley and Peter Tosh, the song is a powerful call to action that carries on reverberating with everyone struggling with oppression. Tagged in their 1973 album Burnin’, the song was inspired as a response to a visit to Haiti when Bob Marley witnessed the poverty of the locals. The song goes ahead to inform people not to be patient in waiting until the next life to discover fulfillment. Thanks to their astonishingly brave souls that Bob Marley and The Wailers produced a song that called people to fight for their rights at all cost.