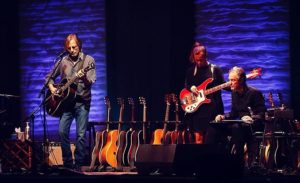 Let’s just get this one out of the way as it’s probably the most famous and commercially successful Jackson Browne songs performed by another band of all time.The Eagles owe their first big hit of their career to Mister Jackson Browne. Yet, of course the song was also co-written with Glenn Frey who came in after the song had just about been done and added a few verses, at least that what we have been told.  So it’s not a 100% covered song since it was co-written, but in the end since they both released their own versions we think it qualifies for this list.

Continuing with our 10 Best Covers Of Jackson Browne Songs list we take a listen to the great song entitled “Doctor My Eyes.” It may be a surprise to many that the Jackson 5 covered a Jackson Browne song because they were such different artists. Yet, a great song is a great song and The Jackson 5 delivered a fun energetic soulful version of this song in their own legendary way. The Jackson 5 recorded the song for their 1972 album entitled Lookin’ Through the Windows. The song got lost in the United States, but in the United Kingdom it was a top 10 smash.

In the number eight spot on our 10 Best Covers Of Jackson Browne Songs list we present the song entitled “Rock Me On The Water.” This phenomenal Jackson Browne song makes two appearances on this list in two very different versions from two remarkable artists. The first one up is Johnny Rivers stunning version. The song appeared on the Johnny Rivers album entitled Home Grown. The album was released in 1971. Johnny Rivers version starts out with a solo piano that wraps itself around Johnny Rivers‘ soulful vocals in a sparse arrangement that builds throughout the song as a great team of female backing singers join him on the chorus. We couldn’t leave this one out. Johnny Rivers just had that magical voice that was so unique.

In the number seven position on our 10 Best Covers Of Jackson Browne Songs list is the song entitled “Somebody’s Baby.” Jackson Browne wrote this song for the movie Fast Times At Ridgemont High. It was perfectly placed in the movie around Jennifer Jason Leigh. The unique reggae cover version presented here was done by Andru Donalds. This very cool remake was also placed in a motion picture we all loved entitled Good Will Hunting. That film was released about seventeen years later in 1997 from Fast Times.

Every songwriter would love to have one of their songs covered by the wonderful Bonnie Raitt. She stands as one of the greatest voices in classic rock history. She has covered so many songs by brilliant songwriters and turned them into big hits. At the halfway point on our 10 Best Covers Of Jackson Browne Songs list is the song entitled “Sleep’s Dark and Silent Gate.” Bonnie Raitt’s version of this great song from The Pretender album is simply stunning. Bonnie Raitt released her version on the album The Glow.  The album was released in 1979.

At the number four spot on our 10 Best Covers Of Jackson Browne Songs list we present the song entitled “These Days.” This warm version in the number four spot was recorded by the great artist Nico. She released the song on her 1967 album entitled Chelsea Girl. It was Nico’s debut album. Listen to how those strings just carry Nico’s accented vocals into the heavens. Simply mesmerising.

Moving along on our 10 Best Covers Of Jackson Browne Songs list we present the song entitled “Redneck Friend.” Dave Alvin does rip rockin blues versions of this old Jackson Browne song and just blasts the roof off. The former lead singer of The Blasters released this version on the album West of the West. The song was released  in 2006. Don’t miss this one

As we close in on the top spot on our 10 Best Covers Of Jackson Browne Songs list we celebrate the song entitled “These Days,” one more time. We will never get tired of listening to the sound of Gregg Allman’s voice. It was one in a million. This version of These Days just works so well. It’s as soulful and spiritual as it gets. The song was released on Gregg Allman’s solo album entitled Laid Back. The album was released in 1973.