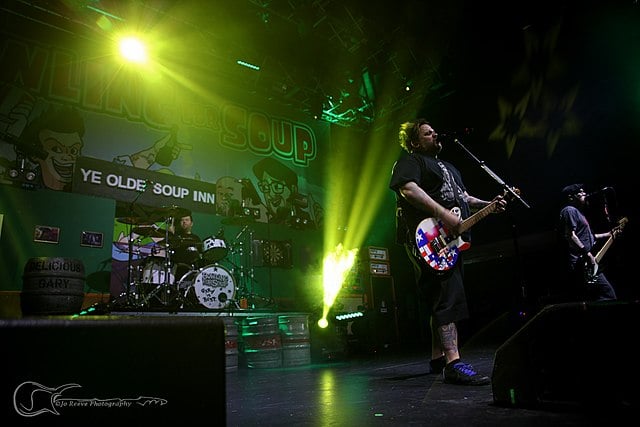 Our Bowling for Soup Songs Ranked list looks back at the songs of a great 1990s band that celebrated some big hits and TV theme songs. The band was formed in Texas in the 1990s. Bowling for Soup released ten studio albums throughout their career. The band’s first album was released in 1994 enetited Bowling For Soup. The group’s breakout record was issued in 2004 entitled A Hangover You Don’t Deserve. It was the band’s first album to go Gold fueled by the incredible popularity of the album’s lead single “1985.” A song loved for its mention of all the popular music artists in 1985 such as Bruce Springsteen, U2 and Madonna. Our top 10 Bowling For Soup songs ranked list picks out ten of the most popular Bowling for Soup songs ever released.

The fun never ends with Bowling For Soup on this great song “High School Never Ends,” and image and concept that is pretty much a nightmare for thousands of people. The song was released on the same album we just took a listen to in the great Bowling For Soup album entitled The Great Burrito Extortion Case. “High School Never Ends,” was released as the first single from the album where it just broke into the US Billboard Hot 100.

Bowling For Soup gets down with this great single entitled ‘Scope.”This was the band’s debut single from the album entitled Rock On Honorable Ones!!  The album was released in 1998. It stands as the band’s second album. This is one pretty straight ahead rock song with a great guitar riff and a hook that never fades from memory.

Continuing past the halfway point on our Bowling For Soup songs list we present the legendary song “Emily.” Like the last song on our list, the song “Emily<” was also released on the album Drunk Enough To Dance. This was the band’s fourth studio album release. It stands as one of their best albums the group has ever released. “Emily,” was released as the second single from the album. The band members on the album consisted of Jaret Reddick on vocals and rhythm guitars, Erik Chandler on bass, and vocals, Chris Burney on lead guitars, vocals and Gary Wiseman on drums.

In the number three spot on our Bowling For Soup songs list is the band’s great track entitled “Almost.” The song was released on the band’s album A Hangover You Don’t Deserve.  “Almost” was the second single released from the album. It had the difficult task in following up the band’s huge smash hit “1985,” They loved the song in England where it was a huge hit reaching all the way up to the number one spot on the UK Pop Charts.

We love the way Bowling For Soup covers some classic songs and makes them their own. “I Melt With You,” is a song that is so identified as Modern English’s signature song. However, Bowling For Soup turned it into one of their best recordings of all time. The song was recorded for the soundtrack to the motion picture Sky High. The song was placed as the first track on the album. It was also released as the album’s only single.