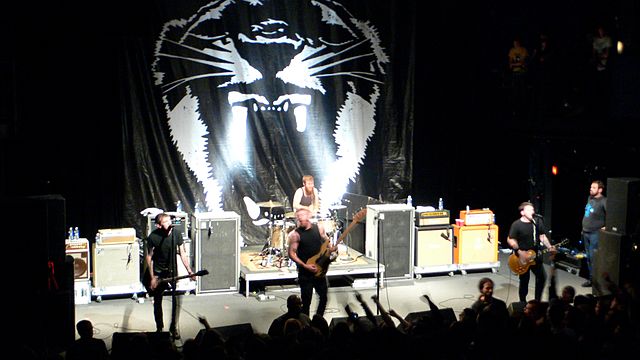 Our Against Me! Songs Ranked list takes a look at a great rock and roll band that straddles the genres of rock and punk in a most original passionate and energetic way. One of the great rock and roll bands of the 2000s that word scared to scream out in protest the fight for what they believed in. Man was led by the group singer and guitarist Laura Jane Grace it will come out in 2012 as a transgender woman. So far the group has released seven Studio albums. The first album was released in 2002 entitled Against Me! Is Reinventing Axl Rose. That album was followed by Against Me! as the Eternal Cowboy in 2003 which was followed by Searching for a Former Clarity in 2005. The band release one of their most outstanding albums in 2007 entitled New Wave. Their three most recent albums included White Crosses in 2010, Transgender Dysphoria Blues in 2014 and  Shape Shift with Me in 2016.

We open up our Against Me! Songs Ranked list with this very cool tune entitled “Stop.” Although a lot of people called against me a punk named this isn’t punk music this is just great rock and roll. The song’s chorus sounds similar to Frankie Goes to Hollywood’s classic song “Relax.”  This is a really well produced song that just works so perfectly open up this top 10 against me songs ranked list. The song “Stop,” was released on the band’s fourth studio album entitled New Wave. The album was released in 2007 on Sire records.

Yeah baby listen to the sound of that guitar at the start of this song. This sounds very much like the great band Social Distortion. The song “Haunting, Haunted, Haunts,” was released on the album Shape Shift with Me. The album was released in 2007. This was the band’s seventh studio album and it is easily one of their best. The song “Haunting, Haunted, Haunts was never released as a single but it’s easily one of the standout tracks on the album.

Continuing with or Against Me! Songs Ranked list we turn once again to another track from the great Shape Shift with Me album. Listen to how powerful this song sounds. I just hits right in the gut. This is one song that could never be a hit on the radio because of the lyrical content which is just so much fun to listen to. The song was written by Laura Jane Grace, Cody Votolato,and  Marc Hudson.

In the number seven spot on our Against Me! Songs Ranked list we present the dynamic and spectacular song True Trans Soul Rebel. The song was released on the album Transgender Dysphoria Blues. The album was released in 2014. The songs and album stand as a formidable and brave statement of band leader Laura Jane Grace  coming out as a transgender wonderful human being.

Moving along on our Against Me! Songs Ranked list we turn to one of the band’s most popular songs among their loyal following of fans. The song “Don’t Lose Touch,” was released in 2005. “Don’t Lose Touch,”  was issued on the album Searching for a Former Clarity. The album was a turning point in the band’s career as it would become their first record to break into the much respected Billboard Top 200 Album Charts. The song was written by Laura Jane Grace, James Bowman, Andrew Seward, and Warren Oakes.

It’s quite a shift in sound from the last song on this list “From Her Lips to God’s Ears (The Energizer).” to the song featured here entitled “Cavalier Eternal.
And we kind of dig that. We love when bands mix it up like this throughout their career. This is sort a twist country swing song written by Laura Jane Grace.The song was released in 2004. It was the band’s second single release of their career.

This one starts out sounding like The Cars at first. Then of course it all shifts into that great Against Me! sound. The chorus is to die for on this one. The song was released on the band’s fantastic album entuited New Wave. The album was released in 2008. The song “Thrash Unreal,” was the second single released from the album. This one was real special for the band because  it became the band’s first single release to break onto the music charts in both Canada and the United States. The song hit number 3 on the Canadian Rock charts. It also was a top 20 hit on the US Billboard Adult Alternative AirPlay chartS speaking at number 11. This is the album that help the band start to get recognized outside of their loyal fans. Great rock and roll album and a killer song in the tune “Thrash Unreal.”

With a title like this you were probably expecting something sounding like the Sex Pistols. However, what we get is something quite different sounding. This is a fabulous  produced slick Rock and Roll tune that is very much new wave sounding with a touch of mid 70s rock and roll and of course that 2000’s modern rock sound. The video is extraordinary. The song was released in 2010 on the album white crosses. This is the band’s only number one single when it hit number one on the Canadian Rock charts in 2010.

This is just one of those songs you fall in love with in the first couple of seconds. And you thinking to yourself where has this band been my whole life and how did I not know about this group sooner? When people say there’s no good new music coming out anymore they need to hear groups like Against Me! The song “Unconditional Love,” was released in 2014 on the album Transgender Dysphoria Blues. The song “Unconditional Love,” would become the band’s highest charting song in the United States where it hit number five on the Billboard U.S. Sales charts. This is truly a great rock and roll song.

Against Me! Songs Ranked article published on Classic RockHistory.com© 2021