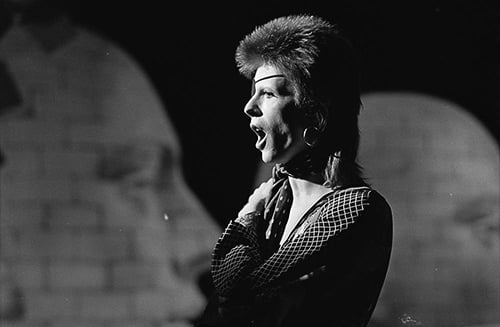 The late, great David Bowie was known as one of the most original songwriters of his generation. However, he also did a good cover tune. In interviews, he claimed to bore easily. When he got excited by a song, he often included his unique version in live shows. He even did an entire album of cover songs in 1973 called Pin Ups. Here are the 10 best covers David Bowie did of other people’s songs.

David Bowie had a complicated relationship with “My Way.” This was a French song. When Frank Sinatra was interested in singing to the tune, David Bowie was originally hired to write the English lyrics. They were, in his own words, “embarrassing, really.” Sinatra would use Paul Anka’s lyrics instead. David Bowie did record his own version, using Anka’s lyrics, which was not released until 2016 during a BBC radio program called The People’s History of Pop. The performance is more poignant in light of David Bowie’s death.

David Bowie loved the Rolling Stones. There is a memorable interview on the UK’s premier chat show, Parkinson, where David Bowie not only describes going to an early Rolling Stone concert, but does an eerily accurate Mick Jagger impersonation. Fortunately, he does not try to do a Mick Jagger impersonation on this track of off his hit 1973 album Aladdin Sane. This version is far more raucous than the original, with an impressive piano by Marc Garson. After hearing this, you can’t help but wonder if the piano survived the recording session.

Bruce Springsteen’s Greetings from Asbury Park has many well-known songs, but this is not one of them unless your a Bruce Springsteen fan. It somehow struck a chord with David Bowie, who did his own version but kept it unreleased for many years. It finally surfaced in the 1989 box set Sound + Vision. Although David Bowie is singing and there   are strings in the mix, the tune has all the unmistakable raucousness and poetry of a Bruce Springsteen song. David Bowie also distorts his voice in places, but does a little Bruce Springsteen imitation near the end.

Yes, that’s right – David Bowie did a cover of the hit Beach Boys tune which originally appeared on their 1966 classic album Pet Sounds. Bowie’s version contains a little harmony at the end, as if a nod to the Beach Boys’ trademark sound. David Bowie sounds absolutely heartbroken here, while the Beach Boys merely sounded wistful. David Bowie’s version contains a string section and horns, giving it a fuller, although highly produced, sound. This cover song can be found on Bowie’s 1984 album Tonight.

David Bowie takes the Cream classic and funks it up with silky-smooth layered lyrics, masses of synthesizers and a solo that might be from a guitar, but it’s hard to tell. A heavily electrical arrangement of the guitar, bass and drum original, you can hear it in all it’s weird and wonderful glory on the 1993 album Black Tie White Noise.

Listening to this, you see why many on the Internet state that David Bowie wrote this quirky song that’s really not about Pablo Picasso, but about someone not very good at picking up girls. It fits right in with Bowie’s catalogue of songs about outsiders and people who don’t quite fit in. The actual writer of this song is Jonathan Michael Richman, who wrote a whole series of songs about famous artists. David Bowie performed this live and recorded a version on his 2003 album Reality.

David Bowie loved the Velvet Underground, so much so that he produced Lou Reed’s classic Transformer. This song, about Reed’s experiences getting shock treatment in childhood, became a staple of David Bowie’s live shows since 1971. The original version sounds like 1950’s doo-wop, while David Bowie’s contains all of the malevolence implied in the lyrics. David Bowie often speeded up the tune slightly, though the song would be performed differently each tour. A live version can be seen in the Ziggy Stardust movie, but the 1996 version has a harder edge.

David Bowie takes the Simon & Garfunkel classic and puts his own wistful spin on it. Bowie’s voice works perfectly, since most of David Bowie’s written work was about feeling like a stranger in a strange country. His version has no backing vocals and has a soft, almost carnival-like organ, albeit a very sad carnival organ. David Bowie did not record this, but did perform it live in 2001 for the Concert for New York City done in the aftermath of the September 11 attacks.

Perhaps you haven’t seen the 1957 film Wild is the Wind. If you did, you’d have heard this song sung by Johnny Mathis. If you did hear it, you probably fell asleep to it. It’s the kind of song played in dentist’s offices in the 1970s. Bowie takes this overblown, weepy love song and transforms it into a powerful rock ballad. Gone are the strings, the choir-like backing vocals and the thinness of the tune. By making this vastly superior to the original, it gets high markings on our list of 10 best covers David Bowie did of other people’s songs.

We end this list of 10 best covers David Bowie did of other people’s songs with a song that was part of David Bowie’s live shows since the 1970s – The Velvet Underground’s “Waiting for the Man.” David Bowie’s voice is arguably better then Lou Reed’s, but both have a unique intensity of waiting for the man (a drug dealer.) Bowie’s live shows often had a more electronically polished sound than the collapsed-garage sound of the original Velvet Underground version. In 1997, Lou Reed joined Bowie onstage to perform on Bowie’s 50th birthday concert at Madison Square Garden.