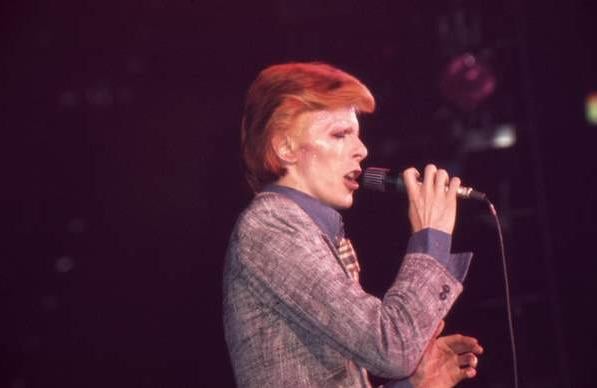 Writing an artist bio about David Bowie is a bit like standing in the middle of Yosemite National Park trying to choose which trail to hike along. There are a million to choose from. They’re all great, they’re all going to lead to something incredible, and more than likely they’re all going to be overwhelming. Given recent events and the passing of this great man I’m going to choose a path I might not otherwise. I could go into a long treatise about his five platinum and seven gold albums in the United States or the fact that he released eleven number one recordings. Think about that for a second. Eleven number one albums from one artist. If that doesn’t blow your mind then consider this. Bowie had number one albums in four different decades.

I could talk about how he was inducted into the Rock and Roll Hall of Fame 20 years ago, long before he was finished as a recording artist. In fact, Bowie still had three Top 20 albums ahead of him when he was inducted. How about the fact that he’s sold over 140 millions records worldwide? I could talk about all that stuff but it doesn’t really matter so much anymore does it?

What really matters is David Bowie’s influence and legacy, and that’s the path I’m choosing for this profile. David Bowie literally and figuratively changed the world, making it a more diverse place, a more accepting place, and, dare I say it, a better place. That kind of legacy needs to be remembered. For when one solitary person can affect the lives of hundreds of millions stretched over decades and decades we must all stop and take note.

Born David Robert Jones in January of 1947, Bowie’s legacy impacted countless people, spawning movements and genres of all kinds. He and Marc Bolan are credited with creating Glam Rock while Bowie was simultaneously inspiring the earliest incarnations of the punk scene. As the punk rockers rose to stardom, Bowie shifted, spurring his record company to adopt the slogan, “There is old wave, there is new wave, and there is Bowie”.

Sticking with music his influence can be felt in nearly every genre out there. Take hip-hop for example. Bowie’s music has been sampled by more artists and producers than you’d care to count. Names like Ice Cube, Public Enemy, Dr. Dre, Tribe Called Quest, P. Diddy, and Jay Z. are just the tip of the iceberg when it comes to performers who have used Bowie’s work in their own. In fact, just after Bowie’s death Kanye West tweeted that “David Bowie was one of my most important inspirations, so fearless, so creative, he gave us magic for a lifetime”.

David Bowie was the first concert Madonna ever attended. He was a collaborator of the Rolling Stones and Iggy Pop. He produced Lou Reed and sang with Bing Crosby. He sang with Queen and composed for The Flaming Lips. In fact, the list of artists Bowie has collaborated with in some form or fashion is hundreds of entries long. It’s a staggering body of work.

Moving away from music though, Bowie is considered a fashion icon and David Bowie’s influence is still being felt. Clothes fit him well and his constantly changing persona allowed him to wear whatever caught his fancy but his style was his own, no matter how many times it changed. People noticed and their work was influenced by him. Go to any fashion show, be it the work of Dries Van Noten, Jean Paul Gaultier, or Emilio Pucci, and you’re bound to see some piece that oozes with Bowie’s style and stature.

Here’s a strange one. Video games. Bowie’s influence is all over the gaming world and in not so subtle ways. Hideo Kojima is known as the creator of Metal Gear Solid, one of the most popular games ever made but most people don’t know that Kojima’s game is a virtual tribute to Mr. Bowie. Levels are named after his songs. Plot lines are developed around Bowie-esque characters. An entire mercenary unit in the game is named the Diamond Dogs after Bowie’s hit song. In fact, Kojima’s claims that pretty much every character in the game is styled after a different Bowie persona. It wasn’t just Metal Gear either. Bowie himself appeared in the game Omikron: The Nomad Soul and the game Xenosaga’s main character is named Ziggy.

Bowie’s influence on our social mores is notable as well. Bowie was a gender bender at a time when homosexuality was not only uncool, it was still illegal. Bowie’s fluid sexuality and openly bisexual behavior made him a target but it also made homosexuality cooler and more acceptable to the mainstream. Thousands of young people struggling with their identities looked up to him as a beacon of hope and change. Bowie, the ultimate outsider, made them feel accepted.

Bowie influenced art as well, both as a performer and a visual artist. His appearances always walked the line between a musical concert and a performance art piece featuring pink poodles with TV’s imbedded in their bellies or giant puppet costumes just to name a few. As an artist himself his work has gained quite a bit of attention. His show “David Bowie Is” shattered attendance records at the Chicago Museum of Contemporary Art.

Even the topic of death has not escaped David Bowie’s influence. His final album, Blackstar, was recorded as a good-bye, a final sign off by a man who knew he was losing a battle with liver cancer. The lyrics of the first single, Lazarus, are a haunting letter from the grave as David Bowie manages to turn his own passing into an art piece.

Suffice to say the world is a very different place because of David Bowie’s influence. I think the most poignant thing I’ve heard about his passing was in the form of a quote from actor and comedian, Simon Pegg, who said, “If you’re sad today just remember, the world is over 4 billion years old and you somehow managed to exist at the same time as David Bowie.