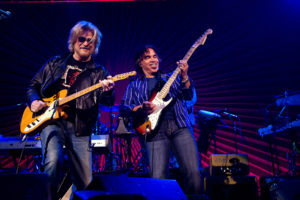 Our Top 10 Hall & Oates Albums list presents the best Hall & Oates albums from one of the most successful musical duos of all time. If you grew up in the 1970s and 1980s you were used to hearing their music every time you turned on the radio. The group had dozens of hits with a sound that crossed the genres of pop, rock and r&b so magnificently. Two men that looked so opposite of each other utilized their different musical voices to blend so well together in harmony. It was a sound that captivated audiences and made for huge commercial success. The group also put together a band of brilliant musicians that brought there music to life, That band included G.E. Smith who would later become the band leader on Saturday Night Live. Another important part was bassist Tom “T-Bone” Wolk who was an essential part of laying down the grooves in their sound along with drummer Mickey Curry. Playing those great saxophone solos was Charlie DeChant. The band would also use the legendary keyboardist Larry Fast on many of their recordings.

Hall & Oates released their first album in 1972 entitled Whole Oates. The group would hit it big in 1973 with their second album  entitled Abandoned Luncheonette which featured the single “She’s Gone.” From that point on, Hall & Oates would release sixteen more albums making for a Hall Of Fame career. It was tough to pick just ten to feature on this Hall & Oates albums list, but we think we picked the right ten to serve as a starting point in looking back at the fabulous musical career of Hall & Oates.

We open up our top 10 Hall & Oates Albums List with one of the group’s later albums entitled Do It For Love. The hits had long since stopped by the time Hall & Oates released the album Do It For Love. But that didn’t mean that they weren’t still putting out great music. The album also did contain the band’s first number one hit single in almost twenty years. Not since 1984s Big Bam Boom’s single “Out Of Touch,” had Hall & Oates topped the charts. However in 2002, the album’s title track “Do It For Love,” hit number one on the US Billboard Adult Contemporary Charts.

The rest of the album’s thirteen strong songs were filled with that legendary soul and so well performed as always. The album also featured a guest appearance by Todd Rundgren on the song “Someday We’ll Know.” This album seemed to harken back to the group’s earlier 70s sound mixed with spectacular production that made it sound just so sweet.

This was 1984 and many albums were being heavily produced in the era of the big 80s sound. Big Bam Boom defined that huge sound that was popular at the time. The album hit number five on the US Billboard Top 200 Albums Charts. In 1984, Hall & Oates had to compete with Bruce Springsteen, Madonna, Prince, The Cars, Huey Lewis & The News and so many other big time acts that were tearing up the charts in a spectacular year for music.

In the number eight spot on our top 10 Hall & Oates Albums List we present the album entitled Marigold Sky. This may be Hall & Oates most underrated album of their career. This is a really good Hall & Oates album. It had been seven years since Hall and Oates had released the album Change Of Season in 199o. Released in 1997 Marigold Sky. was not heavily promoted and kind of flew under the radar because there was no big hit singles on the album. It was Hall & Oates first album not to go Gold since 1979’s X-Static.  Still the record was filled with gorgeous songs especially the heartbreaking track “Throw The Roses Away.” We highly recommend this sensational album. The Marigold Sky album hit number ninety five on the US Billboard Top 200 Albums Charts.

In the number seven position on our top 10 Hall & Oates Albums List is the album entitled Live At The Apollo. We don’t usually put live albums on our top 10 lists but Live At The Apollo is just too good not to list. Hall & Oates recorded the album with The Temptations David Ruffin & Eddie Kendricks. It doesn’t get much better than that in the soul music r&b category than Hall & Oates teaming up with the main members of The Temptations at the Apollo Theater in Harlem. Yeah baby thats what I’m talking about.  The single released from the album The Way You Do the Things You Do/My Girl” became a top 20 hit. The album was released in 1985  The album hit number twenty one on the US Billboard Top 200 Albums Charts.

Landing in the number six spot on our top 10 Hall & Oates Albums List we present the album entitled Abandoned Luncheonette. This is the album that turned Hall & Oates into a household name . It was their second album release and the group’s first album to not only go Gold in sales but Platinum as well. The success of the album was fueled by the album’s single “She’s Gone.” The sound of Hall & Oates that we would all come to love really begins to resonate on their great sophomore release. The Abandoned Luncheonette album was released in 1973. It was their first album to break onto the Billboard music charts. The album hit number thirty three on the US Billboard Top 200 Albums Charts.

At the halfway point on our top 10 Hall & Oates Albums List is the album entitled Private Eyes.  The Private Eyes album was Hall & Oates second album of the 1980s  Many songs from the album would be filmed for videos that would become heavily promoted on MTV. Hall & Oates would become MTV favorites for the first half of the 1980s and the promotional push from the channel helped these album soar to great commercial success. The Private Eyes album yielded some great singles such as I Can’t Go for That (No Can Do)” and Private Eyes” which both hit number one on the Billboard Hot 100. Two number one singles from the same album makes for a pretty successful album released. Private Eyes also beamse the group’s first top 10 album on the US Billboard Top 200 Albums Charts where it peaked at number five.

At the number four spot on our top 10 Hall & Oates Albums List we present the album entitled H2O. The album was released in 1982 Hall & Oates 1980s success continued big time with the release of the album H20. The H20 Album would become Hall & Oates highest charting album of their career. The album hit number three on the US Billboard Top 200 Albums Charts. The lead single from the album entitled “Maneater,” went all the way to number one on the Billboard Hot 100. The follow up singles “One on One” and “Family Man,” were also successful releases for the group. Hall & Oates had become a big time hit making machine with two albums in a row with number one singles.

There is a lot of sentimental value behind picking this brilliant album in the number three spot  on our top 10 Hall & Oates Albums List. That sentimental value is probably shared by everyone who remembers listening to the album’s big hit single “Sara Smile,” on the radio back in the summer of 1975. It was Hall & Oates first big hit and their first single to go Gold in sales. Every track on the album became just a wonderful listening experience in the genre of what they called blue eyed soul. Simply perfect.

Just of the top spot on our top 10 Hall & Oates Albums List we showcase the album entitled Voices. The Voices album was the record that started their 1980s glory years.  Hall & Oates had been a popular group in the 1970s but the Voices album took them to a whole new level of popularity with the amount of hits the group released from the record. Some of the groups best songs of their career were released on Voices including the tracks “Kiss on My List,” “How Does It Feel to Be Back” Everytime You Go Away” “You Make My Dreams” and the great remake of the Righteous Brothers “You’ve Lost That Lovin’ Feelin'” The album was released in 1980.

We conclude our top 10 Hall & Oates Albums List with the album entitled Bigger Than Both of Us. The duo’s fabulous album was released during the summer of 1976. It would become Hall & Oates highest charting album of their career up to that point. The album hit number thirteen on the US Billboard Top 200 Albums Charts.The album also broke onto the US Billboard Top R&B Albums Charts peaking at number thirty three. The success of the album was fueled by the hit single “Rich Girl,” which became Hall & Oates first number one single of their career.

The album also contained some wonderful Hall & Oates gems especially the soulful dark track “Do What You Want, Be What You Are.” Other standout tracks included the album’s opening number “Back Together Again,” as well as the hot cuts “Crazy Eyes,” “London Luck & Love” and the album closer “Falling.” Hall & Oates would release much commercially successful albums later on, but the captivating album Bigger Than Both of Us is the album that defined the heart of their sound and soul more than any other.