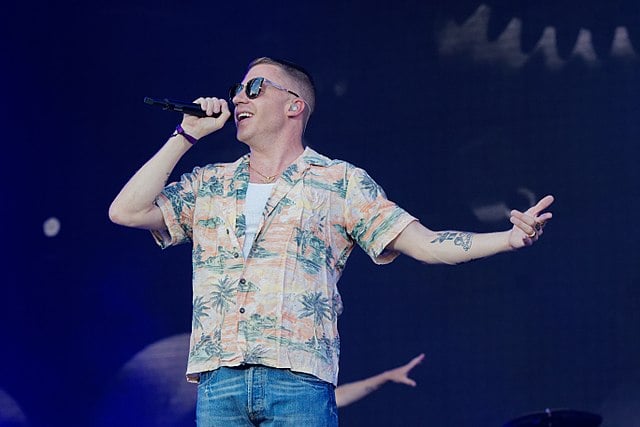 Our Top 10 Macklemore Songs Ranked list looks at an artist whose real name is Benjamin Haggard Hannity. Macklemore Songs Ranked article defines the work of  an American rapper from Seattle. As well as his solo career, he is also one half of the duo Macklemore and Ryan Lewis with producer Ryan Lewis. The due had a Billboard number one in 2013 with the song “Thrift Shop” which was the first single in nine years to top the chart without any major label backing. Their follow up single “Can’t Hold Us” also reached the same position making them the first duo to have their first two singles top the chart consecutively.

All in all Macklemore, who released his first album in 2005 has gained a lot of success both with Lewis and with his solo career. So with this list we will look at what Macklemore’s ten best songs both on his own and with Lewis.

This is taken from the duo’s early “VS” ep released in 2009. This is one of the standout tracks from the ep which borrows from “All These Things That I’ve Done” by The Killers by using a sample of the song containing the line “I’ve Got Soul But I’m Not A Soldier.” It is not quite as good as the later material but is a piece of early work that shows promise.

This is a song that Macklemore wrote and performed with singer-songwriter Kesha who he co-wrote it with along with producer Budo as well as Andrew Joslyn, Sam Wishkoski, and Tyler Andrews. It was released in 2017 originally as a promo single before being sent to commercial radio as the third single from Macklemore’s second album Gemini. It was well received critically and made plenty of ground across various charts.

Up next we have a song from Macklemore and Lewis’ second album The Unruly Mess I’ve Made released in 2016. As the title would suggest, the song is a sequel to a song called “White Privilege” which was a Macklemore solo song that featured on his debut album My World released in 2005. It is particularly relevant now because it discusses issues brought up by the Black Lives Matter movement. It is a long song that lasts for nearly nine minutes and also features the singer Jamelia Woods. On the day of its release, it reached number one on the Billboard + Twitter trending 140.

Next we have a song that is also taken from Gemini and features rapper Lil Yachty. They both wrote it together along with producers Joshua Karp and Tyler Dopps along with Tyler Andrews and Joshua Rawlings. It is a catchy and melodic sounding number which was well received critically and charted high across various places.

This song from Gemini features singer Skylar Grey. They both wrote along with Macklemore’s regular collaborators Budo, Tyler Andrews and Tyler Dopps with Budo producing. It has been described by critics as an uplifting piece that Macklemore uses to reflect on his achievements with his life and career. The video to it memorably featured him travelling him around California with his Grandmother celebrating her 100th birthday.

This track features rapper Xperience and is taken from The Unruly Mess I’ve Made. It was only released as a single in Australia and New Zealand. As the title would suggest, the song references actor Brad Pitt as well as his ex-wife Angelina Jolie. It was met with a mixed critical reception and charting in Australia at number forty and did not chart in New Zealand.

This song features British movie star Idris Elba and producer recording artist Anderson. Paak taken from The Unruly Mess I’ve Made. It was released as a single in the US, Australia, New Zealand and selective countries across Europe. It was met a with a positive critical reception and got to number twenty-one on the Australian singles chart.

This song is taken from Macklemore and Ryan Lewis’ debut album The Heist released in 2012. It features singer Mary Lambert and is about gay and lesbian rights and was written specifically for the Washington Referendum 74 which was a bill that was passed to legalize same sex marriage in Washington State. Upon its release it reached number eleven on the Billboard Hot 100 in the US and number one in both Australia and New Zealand. It was also nominated for Song of the Year at the 56th annual Grammy Awards.

Macklemore himself said that he wrote the song partially out of frustration with the homophobic sentiment that has often been prevalent throughout the hip hop genre. In the lyrics, he references his own gay uncle who appears on the singles front cover along with his husband. It was highly praised by critics upon its release for its message and the fact it showed that music really can be a vehicle for social change.

Just off the top the top spot we have the second single to be taken from The Heist. It was a sleeper hit due to the fact that it was released in 2011 and did not achieve any success until the following year. It reached number one on the Billboard 200 and was the duo’s second number one in the US. It is also their third number one in Australia. It was very well received critically upon its release and had a music video which also received a lot of acclaim due to its adventurous production where it was filmed in both California and New Zealand. It has also been used in several film and television productions.

At the top of this list is Macklemore and Ryan Lewis’ biggest hit featuring rapper Wanz and taken from The Heist. The song is about Macklemore’s usage of thrift shops and the fact that unlike a lot of rappers he likes to save money. It was also a sleep hit that reached number one in several countries across the world. At the 56th Grammy Awards it won the award for best rap performance and song. Critics praised its lyrical content for its critique of consumerism. It has been used a lot in the media since its release. As well as being featured in several movie trailers, there have been a few rather amusing parodies of it from a spoof of it on “Sesame Street” to Weird Al Yankovic’s cover of it on his album Mandatory Fun.