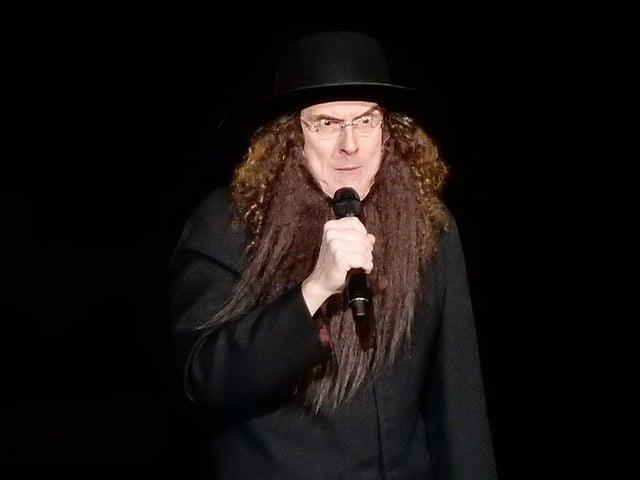 Our Top 10 “Weird Al” Yankovic Song Parodies takes a look at the song parodies that made Weird Al Yankovic so famous in the 1980s and beyond. Just about everybody loved Weird Al Yankovic. The song parodies he came up with were both brilliant and almost beyond entertaining. Of course not everyone loves a Weird Al Yankovic. Some people found him very annoying. But we kind of get the sense he probably enjoyed being annoying, that’s what he was really all about. Al Yankovic began his career on Doctor Demento’s show. This would lead Weird Al Yankovic to eventually signing with Scotti records in 1980. Al Yankovic and MTV would form a perfect marriage in the early 1980s. While Weird Al Yankovic’s songs were enjoyable just to listen to from an audio perspective, the videos he made along with them were so hilarious they turned him into a huge worldwide star.

We open up our Top 10 “Weird Al” Yankovic Song Parodies list with his cover of Queen’s “Another One Bites the Dust.” Weird Al Yankovic parodied the song with his version called “Another One Rides the Bus.” This was Weird Al Yankovic’s television debut. Nobody knew who he was at the time. He appeared on late night TV on the Tom Snyder show. This brilliant performance is not to be missed.

Continuing with our Top 10 “Weird Al” Yankovic Song Parodies list we jump almost twenty years ahead in time to the year 1999. There was no film more greatly anticipated than the return of Star Wars. And just like he had always done throughout his career  Weird Al” Yankovic lampooned it in such brilliant fashion. This one was amazing. Utilizing Don McLean’s “American Pie,”  Weird Al” Yankovic came up with one of his most brilliant parodies. The only thing that held this one from being placed lower on the list was its length, But still, this is so much fun to watch. If your a Star Wars fan your either going to love it or hate it.

And jumping ahead another fourteen years our Top 10 “Weird Al” Yankovic Song Parodies list presents a great parody of Iggy Azalea’s “Fancy.” No style of music or time period has ever been off limits to Al. If it’s popular, Al’s going after it.

Weird Al” Yankovic’s spoof on the Red Hot Chili Peppers is so perfect and off the charts we almost can’t take it. How does he think of this stuff. We love this one. Yabba Dabba Do!

There was no bigger star in the world in 1984 than Madonna. So how could  “Weird Al” Yankovic not parody an artist whose video for the song “Like A Virgin,” was one of the most popular video’s on MTV. “Weird Al” Yankovic’s imitations of Madonna in this one are hysterical. Vevo wont let us use the video so we had to use the one below instead, but its funny.

The opening lyrics to a great  “Weird Al” Yankovic Song Parody are so important. Weird Al” Yankovic hits it perfectly with his opening line to this one. Just the first line alone will crack you up. A brilliant video, a brilliant song parody. He could never had done this after Kurt Cobain passed away, but while he was alive this was so good.

As we begin to wind down our Top 10 “Weird Al” Yankovic Song Parodies list we turn to a video that we are almost at a loss for words to describe. This is really comedic genius at its finest and also a pretty daring parody. Of course “Weird Al” Yankovic probably meant no disrespect to the Amish, but there are so many people who might think differently. Nonetheless, this one was just unbelievably done so well. Inspired by Coolio’s Gangsta’s Paradise (which was a rap over Stevie Wonder’s Pastime Paradise) and the Harrison Ford film Witness, “Weird Al” Yankovic delivered one of his career defining song parodies and videos with “Amish Paradise.” And it’s even got Carol Brady (Florence Hendrson) in it in the role Michelle Pfeiffer played in the original Coolio video and motion picture Dangerous Minds. Originally Coolio refused to grant permission to have his song parodied by Al, but years later said that it was a mistake to have refused. “Weird Al” Yankovic wound up getting permission from the record company instead.

We close out our Top 10 “Weird Al” Yankovic Song Parodies list with what we believe is honestly the greatest music video of all time. Listen we like to laugh and this one has kept us laughing forever. There is so much detail in this video in lampooning Michael Jackson’s Bad. Every move, eye role, character, set is all perfectly parodied to such an astonishing degree. Thank you Al, in a career that has had so many shining slimy but beautiful laughing moments, this was your greatest. “Weird Al” Yankovic even won a Grammy Award for the video. Amazing!