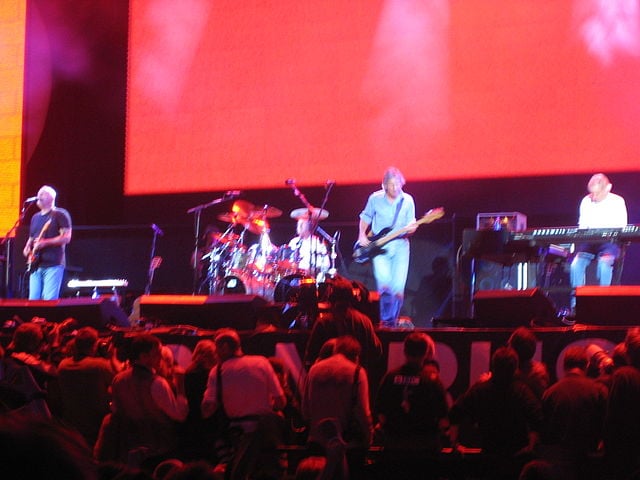 Pink Floyd’s performance at the Live 8 concerts in 2005 was the first time the band had performed together in over twenty forty years. Sadly, with the death of original keyboardist Richard Wright in 2006, it would become the band’s final performances as Pink Floyd. There had been much turmoil between certain members of the band before those concerts, and also ever since. Whatever issues developed between the members of Pink Floyd is really none of our business. All we know is from public statements made by Roger Waters and David Gilmour. However, this article is not about what caused Pink Floyd to break up. This article is about why they never should have broken up. That proof is so clearly evident in their performance of Comfortably Numb from the Live 8 Concert.

Pink Floyd had not performed together as an entire unit in over 24 years, yet their performance at Live 8 sounded like they had never stopped. The band simply sounded great. David Gilmour and Roger Water’s vocals were pitch perfect and sounded just like they did on the studio recordings from 25 years earlier. Roger Water’s bass playing once again locked into those soulful defiant dark bass rhythms with his band mate and drummer Nick Mason. On keyboards, Richard Wright defined why he played such an important role in shaping the sound of Pink Floyd. And than there’s David Gilmour.

Pink Floyd fans have always known that David Gilmour is simply one of rock and roll’s greatest guitarist. Perhaps because of Pink Floyd’s grand atmospheric progressive sound and substantial musical compositions, Gilmour’s guitar playing has never gotten the credit it deserves outside of the Pink Floyd universe. Guitarists like Jeff Beck, Jimmy Page, Jimi Hendrix, and Stevie Ray Vaughan have always gotten all the acclaim among lists of best classic rock guitarist. David Gilmour has always deserved to be ranked right up there with them. David Gilmour’s guitar solo in “Comfortable Numb,” serves simply as the best argument why Gilmour is one of the best. Like the old blues saying”less is more” Gilmour’ solo proved how meaningful that saying is.

If you watch the video, you can see how his band mates tried absorbing every second of Gilmour’s solo. You can hear it in the rhythmic playing they provided underneath his solo, guiding him along the way and creating a pulse that helped fuel Gilmour’s phrasing. In that moment, the definition of the meaning of the word band is defined. Any great guitarists will always state the importance of the groove that a band provides in anchoring the heart of a solo.

What is most telling about Pink Floyd’s Live 8 Performance is the reactions of Roger Waters. During David Gilmour’s vocals, the ca,era shows Roger Waters singing along joyously to Gilmour’s vocals. Roger Waters seems to be really enjoying playing with Pink Floyd again. The camera never shows David Gilmour look back. That’s not to say that he didn’t; it just was not caught on camera. But watching Roger Waters, and listening to how great the band sounded simply just ignited the question ,Why? Why did this band break up break up” We we know there are many reasons, but the performance simply proved they should have never called it quits.

Rock music is an all-powerful medium that can provide encompassing healing agents. At the end of the performance, as the band began their bows, David Gilmour seemed hesitant to join in the bands embrace center stage. Roger Waters noticing Gilmour’s hesitation extended his hand  with a kind gesture signaling for Gilmour to join the group bow. As David Gilmour joined Roger Waters, Nick Mason and Richard Wright, they all hung each other’s arms around their shoulders, and for the last time as a group, sadly, Pink Floyd said goodbye to the world of rock and roll.

The Live 8 Concert was originally viewed by many as a sequel to the Live Aid concerts that had occurred twenty years earlier in the United Sates and England. British rock star and humanitarian Bob Geldof had organized both events. The Live 8 Concert was seen as the beginning of a campaign of awareness towards poverty. It was set to precede the G8 conference and summit. The G8 coalition consisted of the countries of the United States, United Kingdom, Canada, Japan, Italy, Germany, France, and Russia. The point of the coalition was to spread the ideas of democracies throughout the world. However, Russia would eventually become suspended from the group.