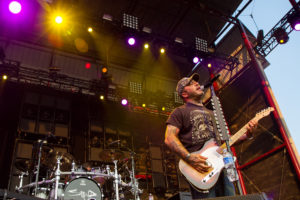 Our Top 10 Aaron Lewis Songs list takes a look at the music of a former heavy metal rocker turned country artist. As the former lead singer of the very cool band Staind, Aaron Lewis would not be the first rock and roll star to go country. The move from the rock and roll stage to the land of country music began many years ago when Jerry Lee Lewis exchanged his four on the four, piano pumping, rock and roll tunes for some cut time, down home, country music. Over the years we have seen many rock stars flirt with country music such as Steven Tyler, Sheryl Crow, Van Morrison and many others. Most of them just released one country album and then went back to their roots. However some like Aaron Lewis and Darius Rucker from Hootie & The Blowfish launched very successful second careers as country music artists. Were they as successful as they were with their former bands. Well not really, but that’s not all that matters. A true artist follows their vision and it seems a man like Aaron Lewis has done just that.

Aaron Lewis’s first album with Staind was released way back in 1996. The man released seven albums with Staind as the group’s lead singer and songwriter. The band’s final album was released in 2011 entitled Staind. At the same time that the band released their last album, Aaron Lewis released his first solo country music EP entitled Town Line. It was extremely successful as it went all the way to number one on the US Billboard Country Music Charts. That must have been pretty inspiring for the heavy metal vocalist. Aaron Lewis would follow up his debut EP with his first  full-length studio album a year later in 2012 with the album entitled The Road.

Our Top 10 Aaron Lewis songs list will focus only on the songs Aaron Lewis has released as a solo artist during his solo career. Its fascinating to see how this amazing heavy metal vocalist with his band Staind completely made a 360 degree turn in the music business and became a country music artist. This list was a little tough to get through. Take a listen and decide for yourself.

We open up our top 10 Aaron Lewis Songs list with a song entitled “Tangled Up in You” It sounds like a play of words on the Bob Dylan classic “Tangled Up In Blue.” The song was released on the EP entitled Town Line. This is a beautiful ballad complete with all the necessary county music elements to make sures that it sounds country. Yet take away all the in instrumentation and just leave the vocals an guitar and you still have a pretty good song that would sound amazing arranged in any musical genre. Country music becomes country music because of arrangement, instrumentation and of course atitude. The song “Tangled Up in You” also featured the vocals of Alexa Carter from Biloxi, Mississippi.

Continuing with our top 10 Aaron Lewis Songs list we take a listen to the poignant song entitled “Whiskey And You.” The song was released on the album entitled Sinner.The album was released in 2016. It’s pretty much a deep album track as it was never released as a single. The song’s lyrics are haunting yet telling “I Drink because I’m Lonesome, I’m lonesome because I drink. Those lyrics along with the moving melody and dramatic chord changes were written by Chris Stapleton and Lee Thomas Miller.

In the number eight spot on our top 10 Aaron Lewis Songs  list we present the song entitled “Am I The Only One.” The song was released as a single in July of 2021. The song is due to be included on his new album yet to released entitled Frayed at Both Ends. This is one of those patriotic songs in the same vein as Lynyrd Skynyrd’s Red White & Blue. It speaks to a specific audience and targets Bruce Springsteen who we love here. But that’s his right as an artist and human being the same way Bruce Springsteen has his right as nit just an artist but as a person living in country where freedom of speech is one of the founding  principles.

We have included the song on the list not because we like it, but because we are journalists and this is a very popular song and should be recognized when putting together a list of the best or at least most popular Aaron Lewis songs. One can’t tell the story of Aaron Lewis solo songs without including this one.

Okay, well now that we got that one out of the way let’s move on. In the number seven position on our top 10 Aaron Lewis Songs list is the song entitled “75.” The song was released on the album entitled The Road. The album was released in 2012. They use just about every country music trick in the book on this one. I would love to hear some of these songs without the heavy use of fiddles and steel guitars that they throw on these songS. It’s just a little too much and almost comical at times. The song was written by Aaron Lewis. The song served as the opening track on The Road album.

An american flag, a pickup truck, a river, and memories of flowing down the river fishing with his grandfather sets up the beginning of this country music song utilizing all the standard country music themes in just twenty seconds in the video. Yet, the songs itself is a really well written song composed by Rhett Akins, Dallas Davidson, and Bobby Pinson. The song was released on the album entitled The Road. It was the third and final single released from the album. The song also was a hit on the US Billboard Country Airplay Charts reaching number forty six.

As we reached the second half of our top 10 Aaron Lewis Songs list we look back at song entitled “Forever.” This one has a really nice groove to it. Its has sort of a Zac Brown Band meets Hootie & The Blowfish meets Jason Aldean feel to it. The song was issued on the album entitled The Road. The album was released in 2012. “Forever,” was the second single released from the album. The song was a hit on the US Billboard Hot Country Songs Charts peaking at number fifty. Forever,” also was a hit on the US Billboard Country Airplay Charts reaching number thirty eight.

Most of the Aaron Lewis songs he has released as a country music artist pay tribute to old school country music. This is the song that pretty much tells you why. You don’t hear Aaron Lewis trying to sound like Billy Currington or Brantley Gilbert. No, Aaron Lewis is more interested in sounding like George Jones, Waylon Jennings, Willie Nelson and the songs that his grandad used to play. At least he sort of point to that in his song. Furthermore, if you listen to his catalog, that’s all your really hear. There is nothing that is too creative or daring, it’s all old school.

This one is a little darker in melodic tone than many of his other songs and actually does rock out a little in a laid back country blues sort of way. We have heard it all before, but it’s still a fun listen. The song was released on the album entitled Sinner. The album was released in 2016. The highlight of this songs happens on the second verse when the great Willie Nelson sings the second verse. Just as the song starts to cook with Willie on board, they end it.

Just of the top spot on our top 10 Aaron Lewis Songs list we present the song entitled “Endless Summer.” Aaron Lewis takes the title of the famous Beach Boys album and slaps it on his happy county mid temp0 rock song he also calls “Endless Summer.”  The song was released on the album entitled The Road. The album was released in 2012. It was the first single released from the album. The song also was a hit on the US Billboard Country Airplay Charts reaching number thirty nine making it his first top 40 hit on the County Music Charts. The song was composed by Aaron Lewis.

We finally get to the end of our top 10 Aaron Lewis Songs list with the song entitled “Country Boy.” Aaron Lewis hit up his other like minded friends to join him on this one. Collaborating on the recording with Aaron Lewis was country music legend George Jones and southern rock icon Charlie Daniels. And that my friends is the reason we put this one in the number one spot. The song was released on the EP entitled Town Line. It was the first single released from the album. The song was a hit on the US Billboard Hot Country Songs Charts peaking at number fifty. It was his first charting song on the Billboard Country Charts. The song also charted on various Billboard Rock music charts.