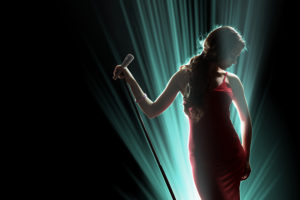 Looking for some great Karaoke rock songs to impress yours friend and become a local hero. Of course you are. However choosing the right karaoke rock songs is just as important. It’s not about picking the most famous songs, although song choice is important. Choosing the best Karaoke rock songs all comes down to picking rock songs that are not sung by singers with amazing voices that sing notes that most normal human beings have no chance of hitting. That means you should think twice before choosing a Journey song sung by Steve Perry. That man has one of the most incredible voices in rock history and most pros don’t want to sing Journey songs. Steve Perry hits notes most humans can’t even dream of hitting. The same goes for a handful of others singer

Be careful choosing Led Zeppelin songs. Robert Plant is another one of those rare singers with a voice that hit notes so high with such a unique reasonacee that most singers had heart attacks when they heard him sing. If your going to pick a Led Zeppelin song choose “Thank You,” or Rock and Roll. The range on those are pretty easy. Stay away from “Stairway To Heaven.” The first half is easy, but the second half will give you a hernia. Another classic rock band you want to stay away from is Queen. We shouldn’t even have to explain that one. Other tough rock singers would be Axl Rose and of course AC/DC which will make your vocals cords bleed.

Of course classic rock Karaoke is not just a male dominated leisure activity. There are plenty of female rock and roll fans that love to sing classic rock music on the Karaoke microphone. Since this article is focused on rock Karaoke we won’t get into the warnings about Whitney Houston or Mariah Carey. However we will warn the females to be careful choosing songs from Heart as Ann Wilson stands as one of the powerful rock singers of all time. with a range that will knock your rock and roll sock off faster than you can say “Magic Man.

Our  10 Karaoke Rock Songs To Pick That Will Make You Sound Great will pick songs for both male and female voices.These songs have been chosen to specifically  make you sound great by choosing songs that don’t have a lot of range but are still classic songs with a lot of heart and soul and above all a great deal of fun to sing in front of a live audience. 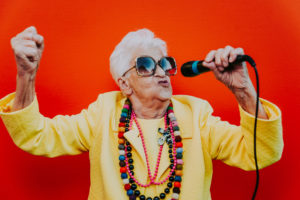 We open up our 10 Karaoke Rock Songs list with the legendary Bad Company song entitled “Can’t Get Enough Of Your Love.” Every garage band in the 1970s played this song. You want to know why? Because it was as easy as it gets when it comes to rock songs. Three chords and a vocal line that was fun but at times almost monotone. Especially in the chorus. Paul Rodgers is a great singer but this one is real easy to sing. If you want to get a little more daring and really turn the crowd inside out choose Bad Company’s “Feel Like Making Love.” You will get a reaction out of that one. Guaranteed!

Continuing with our 10 Karaoke Rock Songs list we handover the great song entitled “Sweet Home Alabama.” Everyone loves this legendary Lynyrd Skynyrd song. Even Neil Young likes it. You want a crowd to song along with you on a chorus. It will happen on this one. One of the all time easy rock and roll songs to sing.high-spirited and full of Energy with easy lyrics.

In the number eight spot on our 10 Karaoke Rock Songs list we present the song entitled I Love Rock N’ Roll. This great song by Joan Jett was a number one record in the 1980s. It’s one of the most popular rock and roll songs of all time. Everyone knows not just the choirs but all the verses as well. It’s easy to sings and all you have to do is snarl once in a while Put another dime in that karaoke machine and come sing with me.

In the number seven position on our 10 Karaoke Rock Songs list and the second female vocal is the song entitled “Hit Me With Your best Shot.” Everyone loves Pat Benatar. This one is so much fun to sing and it will get the crowd roaring. This is a perfect one for a group of women to sing and have fun with especially on the chorus.

Landing in the number six spot on our 10 Karaoke Rock Songs list we present the song “You May Be Right.” Billy Joel’s great 80s song from the Glass House album may be a surprise in this list, but if you have ever witnessed twenty thousand people singing this songs together at a Billy Joel concert than you will realize how much people love this songs. And ts easy to sing.

At the halfway point on our 10 best Karaoke Rock Songs list is the song entitled “Bad Case Of Loving You (Doctor, Doctor).” Some song has such a great single one line that it makes it worth singing just for that one line. If you know this song then you know the line we are talking about. Such a great Robert Palmer song.

At the number four spot on our 10 best Karaoke Rock Songs list we present the song entitled One Way Or Another. The Blondie classic is one of the easiest rock and roll songs in classic rock history to sing. This one will turn you into a star.

If you are looking for a Karaoke songs that will get everyone in the bar singing along with you , look no further than this one. It won’t matter if you can’t hit the notes in this Neil Diamond classic besue the crowd will do it for you. A guaranteed winner baby.

Just of the the number one spot on our 10 best Karaoke Rock Songs list we celebrate the song entitled  Escape (The Pina Colada Song). If there is one song that everyone loves to sing the chorus to, it’s this Rupert Holmes classic. It never gets old.

# 1 – Paradise By The Dashboard Light

Okay this one may be a little tough to sing at some points because it features the great Meal Loaf and Ellen Foley. But it’s so worth the strain because this is as fun as it can get on the karaoke stage. There is no better male and female rock and roll duet karaoke song than “Paradise By The Dashboard Light.”