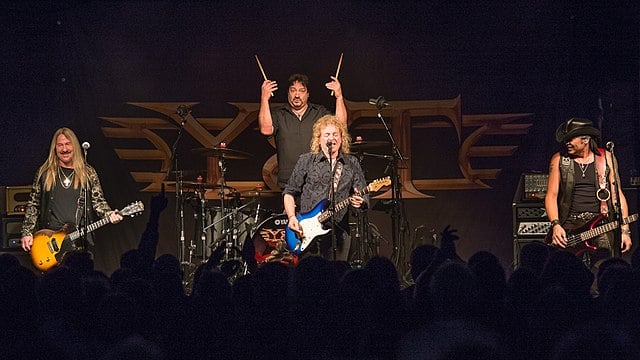 Our Top 10 Y&T songs list looks back at the career of a California band that got its start in the 1970s working as a cover band. As every working musician knows, if your going to play the clubs you got to be good if no one knows your name. Many rock and roll legends from The Beatles to Bruce Springsteen got their start working in the clubs so Y&T were in good company. Word quickly spread over the band’s incredible performances in the San Francisco area in the 1970s. This was a band that was delivering high energy shows that crowds were going crazy over. The band’s performances eventually earned them a record deal with  London Records; home of the Rolling Stones among many other classic rock artists.

The group Yesterday & Today changed their name to Y&T after the band left London records and signed with the A&M label. A&M was a good fit for the group as they released eight albums for the label between the years 1980 and 1986. The group toured with legendary rock and roll bands such as AC/DC, Aerosmith, Motley Crue, Ozzy Osbourne and many others. In 1986, the band signed with Geffen Records. The Geffen Records label was very aggressive in signing artists at the time. The band would later release two more studio albums in the 1990s under the Music For Nations label. In 2010, the band released an album on Frontier Records. From 1976 to 2010 the band would undergo multiple personal changes and release twelve studio albums and five live albums. The group’s hard heavy metal glam sound would serve as an inspiration for countless bands over the past forty years. Our top 10 Y&T songs list should serve as a great introduction to one of classic rock’s pure gems of a band.

Opening up our Y&T songs list we present the rocking song “All American Boy” from the band’s 1985 album, Down for the Count. The song was released as a single by Van Stephenson in 1984. Y&T would add their own glam metal sound to the song in their cover of “All American Boy,” bringing Van Stephenson’s vibe back to life. Thanks to the lyrical prowess of Dave Robbins and Van Stephenson for the great work that Y&T borrowed from to add some spice to their music career.

Who do you trust? It’s almost a cliché that most will say, “In God We Trust.” However, 1984 brought quite a powerful vibe for all rock music lovers, with Y&T ushering in their album, In Rock We Trust. And as great as the title was, the songs disappointed not, with one of the favorites from the album being the song “Lipstick and Leather.” It’s the power in the vocals and instrumentation that makes the song tower over many songs from Y&T’s 1984 album, In God We Trust. You might trust in rock music’s greatness after listening to this song performed in Y&T’s prime years.

Featured on their eighth album, Contagious, the song contagious offers you three minutes and twenty-one seconds of a catchy and “contagious” rock vibe that all Y&T reckon with. Thanks to Taylor Rhodes and Y&T band member Dave Meniketti for the sublime lyrical content that gives the song “Contagious” its greatness. The song starts with some great vigor from the band, backed with some perfectly played instruments. However, it’s the backing vocals that make this song stand out among Y&T songs.

The song “Mean Streak” is the first song in Y&T’s 1983 album, Mean Streak. The band’s song shows what results from the collaboration of a band’s members to write and perform a song. The collective streak yielded to one of the band’s best songs that fans can never seem to forget to date. You ought to love the vocals in the song as they tower over the instrumentation bringing a clear depiction of the vocal capabilities of the band’s lineup. And the guitar solos are just sublime!

Even years after what would be termed to be the prime years for the Y&T, it is by no surprise that the band surprised many with their song “Don’t Be Afraid of the Dark.” Featured in their 2017 album, 20 #1’s: Power Ballads, the song “Don’t Be Afraid of the Dark” proves that old is gold. The band Y&T brings on some vibe from the 70s back to life with this song. And thanks to the band’s frontman Dave Meniketti for the sublime vocals.

Taking us back to the eighties is Y&T’s song “Rescue Me.” Coming from the band’s 1985 album, Open Fire, the song “Rescue Me” brings on Dave as the perfect frontman for the band. What could you possibly say of a man whose guitar skills are so excellent with a voice feeling like it’s sent from heaven? Well, this man is no other than Dave to whom the greatness of this song is credited!

What happens when a man loses what he possesses in this context, material things? To many, the answer is that he is quite prone to receiving a heartbreak from the fiancée, who he adored. Well, I can’t be sure since every situation can be judged best by those in it. In this song, the persona seems to have suffered heartbreak with the past lover who left after he had lost all he held in the palm of his hand. Men can always redefine themselves after a fall and do did the persona. And now that he did, the girl now comes running back. However, the persona says that she better keep running because she can barely get hold of him.

Featured on Y&T’s 1982 album, Black Tiger, the song “Forever” proves that Y&T is among the most underrated bands. You can almost feel that it is such a crime that the band failed to become superstars in their time. From a great intro to a perfect chorus where the backing vocals adds to Dave’s great vocals, everything about the song proves that Y&T were true rock stars.

While there might be quite a number of songs by the title “I’m Coming Home,” Y&T released their version of the famous song title, which impressed their fans by far. Featured in their 2010 album, Facemelter, the song “I’m Coming Home” brings on the best of the band’s vocals and skills on the instrumentation, giving them the bragging rights of some of the best rock performers. It is the guitar, to be specific, that gives this song some sparkle that only a few songs can ever match up.

Released on their seventh studio album, Open Fire, the song “Summertime Girls” is by far the best song from the Y&T band. It would also be featured on their album, Down for the Count. And in the charts, you have to admit that the song performed quite well, being the band’s best performing song on the Billboard Hot 100, peaking at number 55. On the US Mainstream Rock Chart, the song would attain a peak position of number 16. All credit to the rocking performance by the band and great production by the record label A&M Records.