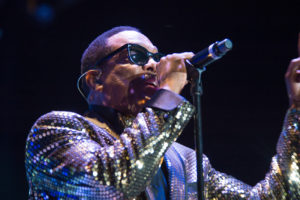 Our top 10 Charlie Wilson songs list looks at the catalog of a legendary singer-songwriter whose star has been shining since taking on a solo career in the early 1990s. Born in 1953, Charlie Wilson grew up in a family whose love for music is uncensored. Charlie Wilson’s musical roots take us back to his childhood, where his family served at the church his father, Reverend Oscar Wilson, ministered. Sunday sermons are far from great in most Pentecostal churches without having the praise and worship team bring their heartfelt singing on the pulpit. While his father quenched the spiritual thirst of the Christians at the church, the rest of the family graced the pulpit with their heartfelt singing and instrumentation.

The three brothers, Ronnie, Robert, and Charlie Wilson, sang to the piano tunes delivered by their mother at the church. This inspired their musical career, having the brothers form The Gap Band, a famous R&B and funk act. Charlie Wilson’s love for music saw him join his school choir when he attended junior high. He also took on the drums in his university marching pride. All these prepared Charlie for his soon-commencing music career alongside his brothers.

Priding themselves with skills and experience, the three brothers’ musical career became a definitive mark in the music scene. With The Gap Band, Ronnie, Robert, and Charlie were among pioneers of the infectious up beat funk music. Charlie Wilson was nothing less than an impressive lead vocalist having his vocals provide an enthralling feel to the band’s songs. He also played several instruments, including the drums, piano, percussion, clavinet, and synth. The band’s songs have been among the most sampled in the music scene proving its ineradicable influence on other generations of musicians.

Michael Paran is among people who believed in Charlie Wilson’s singing. While he played a significant role in rejuvenating The Gap Band back to fame, Michael saw the star in Charlie Wilson’s solo career. Following this, he helped him release one of Charlie’s most acclaimed albums, Bridging the Gap (2000). The album featured top songs such as “Without You” and great collaborative tracks with Snoop Dogg, Nate Dogg, Marc Nelson, and Case. Bridging the Gap (2000) peaked at number one hundred and fifty-two on the Billboard 200.

Charlie Wilson would soon strike a recording deal with Jive Record, with whom he released his third album Charlie, Last Name Wilson (2005). This legendary R&B singer featured other reputable artists in the album, including Justin Timberlake, The Underdogs, The Platinum Brothers, R. Kelly, Kay Gee, and will.i.am. More albums and bigger collaborations followed, with the artist’s vocal style hailed as one of the greatest influences to swingbeat. Here are the top 10 Charlie Wilson songs sampled from his eight solo studio albums.

“If I Believe” is a soulful gospel song featured on the album Love, Charlie (2013). The song is an inspirational testimony by Charlie Wilson that finds him thanking God for the gift of life while showing his unwavering trust in God in all situations. “If I Believe” reminds us of Charlie Wilson’s childhood, where he would sing with his late brothers Ronnie and Robert at the church their dad was a minister.

The song was nominated for a Grammy Award for the Best Gospel Song in 2014. However, it lost the award to “If He Did It Before…Same God” by Tye Tribett. Other songs that were nominated for the award include “Have Your Way” by Deitrick Haddon, “A Little More Jesus” by Erica Campbell, and “Still” by Percy Bady, featuring Lowell Pye.

After almost five decades in the music industry, Charlie Wilson has maintained not only his great looks but also his magical voice. “All of My Love” brings on the shine in his awe-inspiring vocals that age like fine wine. Uncle Charlie teams up with Smokey Robinson to offer soul fans a legendary duet that oozes nothing but great musicianship and a feel-good vibe. The song expresses affection with heartfelt lyrics spelled on a tuneful instrumental and almost-perfect vocals from these soul icons.

“Without You” is Charlie Wilson’s first song to hit number one on the Billboard Urban Adult Contemporary Chart. The song became the brightest of all songs from his sophomore solo studio album Bridging the Gap (2000). “Without You” allows Charlie Wilson to showcase how vulnerable one can get after losing touch with someone they treasure or love. In this context, he showcases how “desperate” a guy can be to get back together with a lady who seems to have left. The song also peaked at number twenty-six on the Billboard Hot R&B/Hip-Hop Songs Chart.

Number six on our top 10 Charlie Wilson songs list is the hit “Chills.” The smooth-tuned R&B song is featured on his eighth studio album, In It to Win It (2017). Uncle Charlie brings on the finest R&B vibes with this song, reminding millennials what pure R&B felt like back in the days. The song’s lyrics are set to offer you a reminder of the feeling of being completely smitten with the one you treasure and love.

“My Love is All I Have” is a beautiful love song that will leave you ladies melting in awe. The song finds Charlie Wilson expressing nothing but pure love mentioning that he might have nothing material to entice the lady, but his pure love might be enough to get them hooked for a lifetime. “My love is All I Have” is one of the gems in his sixth studio album Love, Charlie (2013). His awe-inspiring vocals at his age make him one of the living legends in the R&B music scene.

Just Charlie (2010) might not be Charlie Wilson’s best album, but it is home to our number four song on the top 10 Charlie Wilson songs list. “You Are” is another love song that you might use to express how you feel about your lover. The song earned this R&B legend a thirteen-week stay at the peak position on the Billboard UAC Chart.

“You Are” also rose to the sixteenth position on the Billboard Hot R&B/Hip-Hop Songs Chart. The song was nominated for two Grammy Awards in the Best R&B Performance and Best R&B Song categories in 2012. However, it lost the awards to “Is This Love” by Corinne Bailey Rae and “Fool for You” by CeeLo Green featuring Melanie Fiona.

The former frontman to The Gap Band saw his solo music career reach new heights after releasing the album Charlie, Last Name Wilson (2005). Among the songs that made the album successful was the title song to the album. The song proves how much R. Kelly was a close buddy to Charlie Wilson. R. Kelly helped Charlie Wilson write and produce “Charlie, Last Name Wilson.” He also provides an intro to the song before Charlie blows us away with his magnificent vocals on the hit.

“I’m Blessed” is a collaborative hit between R&B legend Charlie Wilson and rapper T.I. The song is featured on Charlie Wilson’s album, In It to Win It (2017). While he might have had quite a successful music career, Charlie had a share of predicaments. The song reveals his struggle with overcoming drug abuse and being homeless. He calls it God’s blessing that he rejuvenated his life to better days and a glamourous music career. The song saw Charlie Wilson enter the Billboard Hot Gospel Songs Chart for the first time. Amazingly, the song topped the chart after some while.

Number one on our top 10 Charlie Wilson songs list is the romantic hit “There Goes My Baby.” The song is featured in the Grammy Award-nominated album Uncle Charlie (2008). “There Goes My Baby” alludes to a man who falls in love with a beautiful lady at first sight. The song was inspired by the event held at Charlie’s ranch where Snoop Dogg and his wife renewed their vows.

Charlie Wilson dedicated this song to his good friend Snoop Dogg, who features on the song’s video. The song was nominated for a Grammy Award for the Best Male R&B Vocal Performance in 2010. However, it lost to “Pretty Wings” by Maxwell. Other songs that were nominated for the award that year include “Under” by Pleasure P, “The Point of It All” by Anthony Hamilton, and “So Beautiful” by Musiq Soulchild. The song also peaked at number ninety-eight on the Billboard Hot 100 Chart.