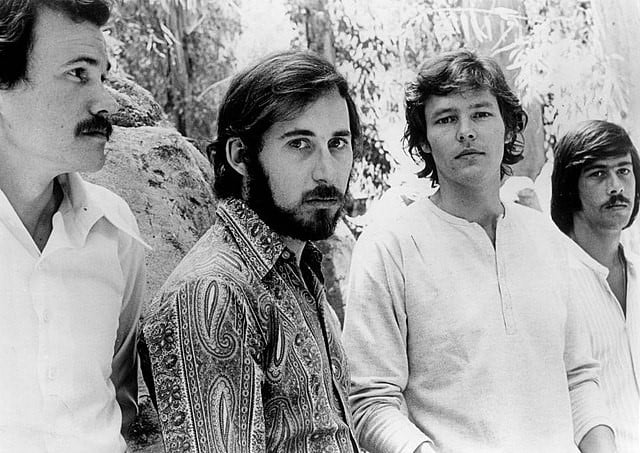 Bread was formed in Los Angeles, California in 1969. The members of the group consisted of singer-songwriter, producer David Gates, and singer-songwriter, session musicians, Jimmy Griffin and Robb Royer. Mike Botts became their permanent drummer in 1969 and “wrecking crew” session musician Larry Knechtel replaced Royer as keyboardist in 1971. Though the writing was left to Gates, Royer – Griffin, Gates would go on to compose and sing all of the groups most famous hits.

Gates’ sweet, soft voice would be Bread’s trademark sound. That in conjunction with the more aggressive album tracks clearly established Bread as the forerunners of 70’s soft rock.They were in great company with artists such as Seals & Crofts, James Taylor, Jim Croce,  Harry Chapin  and The Carpenters. Though Bread was inducted into the Vocal Group Hall of Fame in 2006, to this day David Gates has yet to be inducted into the Songwriters Hall of Fame. Considering all the classics he wrote this is obviously a big oversight. Below is a list of our favorite Bread songs.

We open up our Top 10 Bread songs list with the great track “Sweet Surrender.” This breezy, melodic song was the last of four number one hits for Bread on the United States Easy Listening chart. The song “Sweet Surrender.” can be found on their fifth album, Guitar Man released in 1972.

This tender, easy listening song with a memorable hook sold over one million copies. It was Bread’s first top ten hit released in 1970. The song “Make It With You,” was released on the album On The Waters. It features David Gates’ tender singing and it instantly established the bands soft rock sound. The song was also widely covered by many of the famous 1970s male crooners such as Engelbert Humperdinck and others.

Released as the third single from the 1972 album Baby I’m-a Want You, the song reached number three on the Easy Listening charts. The production is sparse with just acoustic guitar, Gates’ sweet vocal and an electric guitar with a vibrato effect on it that was exploited on their song “If.” The lyrics deal with a man who does the unspeakable: he reads through his lover’s diary! Unfortunately, he finds out in the end that his girl actually loves someone else. Musically, this song can be thought of as the older sister to Gates’ later composition “Aubrey.”

The title track of Bread’s final album entitled Lost Without Your Love is a lush romantic love song, produced and written by David Gates. It was Breads last Top 10 hit in 1976, and signified their comeback after being away from the charts for three and a half years.

This David Gates song first appeared on Bread’s 1972 release Guitar Man. The instrumentation is a little heavier here than previous singles due to the excellent wah-wah guitar soloing of Larry Knechtel. The song reached number eleven on The Billboard Hot 100. The lyrics reflect the loneliness a rock star can have even after amassing tremendous notoriety. The guitar man is always resigned to go on to the next gig and live in an isolated bubble. For him, playing is just a way to make a living. Nothing else. The crowd applauding in the fading outro adds to the songs somewhat melancholy tone.

Originally just an album cut from Bread’s debut album in 1969, it was re-recorded and released as a single from their second album. As usual, it features a sweet, restrained vocal from David Gates who wrote and produced it. The philosophical lyrics about being able to let go of ones lover but still retain an emotional connection to them until they come back makes this song relevant in any time period.

The second single released from the 1972 album Baby I’m-a Want You. The song peaked on The Billboard Hot 100 at number five. Listeners have interpreted this song as one about a broken relationship. However, David Gates revealed that it was written about his father who died in 1963.

One of the greatest songs about unrequited love, it was released as a single in 1973 from the album Guitar Man. It reached #15 on the Billboard Chart. The orchestration surrounding David Gates’ somber vocal is a simple mixture of strings, acoustic guitar and celeste. It’s a beautiful composition with its title inspired by Audrey Hepburn after Gates watched the movie Breakfast At Tiffany’s.  No doubt the classic song Moon River in said film also had its influence on Gates. His choice of developing a wide melodic range against a descending bass line helps make this song a real tearjerker.

David Gates wrote this touching standard in 1971.  It went to #1 on the Adult Contemporary Charts. It has been covered by countless artists and is one of the most popular songs to be played at weddings. The song can be found on Bread’s third release entitled Manna which means bread from heaven.

Interesting side note: David Gates formed his first band, The Accents in high school, in Tulsa, Oklahoma. The keyboardist for the group was none other than Claude Russell Bridges, who later changed his name to Leon Russell.

Honorable mention:  “Mother Freedom” ( a heavy rock song with some aggressive drumming from 1972’s Baby I’m – a Want You), and the prog-pop “I Could” (with it’s odd time signatures) composed by Griffin and Royer. That one can be found on their 1969 debut release Bread.