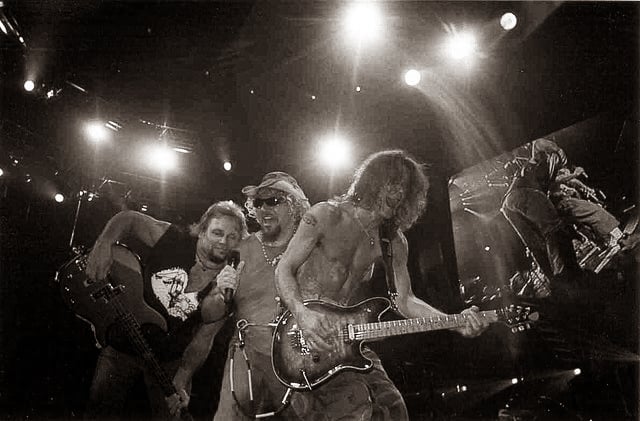 Of course there are many of us who enjoy both lineups equally. Even some Van Halen fans who were with the band from the beginning were blown away by Sammy Hagar’s vocal ability. Of course there are also the long time Sammy Hagar fans who followed the red rocker before he joined Van Halen. Those fans will forever argue that Van Halen was a better band with Sammy Hagar. It’s sad that Sammy Hagar went after the Van Halen brothers in his book. It seemed to ruin any chance of a reunion between Sammy Hagar and Van Halen. If you have been listing to Sammy Hagar‘s solo albums  for the past twenty years you can hear that the man could still sing in 2020 as well as he did when he first recorded with Van Halen. However, with Eddie Van Halen’s passing, we will all never get the chance to hear what that would have sounded like. We did hear what David Lee Roth sounded like on the recent tour. We will leave it at that.

Nonetheless, these are our picks for our favorite Sammy Hagar Van Halen albums ranked. In the end, it’s all for fun, but we do think that it may help out the younger fans just starting to discover the Van Halen magic.

We placed this album on the list of studio albums even though its a live album for one very specific reason. It’s not really a live album. Eddie Van Halen’s guitar parts all had to be redone because his guitar was out of tune on the recordings. So when Eddie Van Halen redid his parts in tune in the studio, it made Sammy Hagar’s vocals sound out of tune. In turn, Sammy Hagar had to enter the studio and sing all new vocals to the live recording. So in essence, only Michael Anthony and Alex Van Halen are playing live while Sammy Hagar and Eddie Van Halen were recorded in the studio. That’s not really a live album folks and it really showed in the sound of the recording. This is one live album to skip. The album was released in 1993.

Two years after the live album was released, Van Halen issued their tenth studio album entitled Balance. It was also the band’s fourth studio album release with Sammy Hagar. This is probably the weakest of the Sammy Hagar Van Halen albums but its still a hard rocking affair that was pretty much heads above everything else that was being released in 1995. I know I played this one constantly on cd in my car and enjoyed every minute of it. Standout tracks on Balance included “The Seventh Seal,” “Amsterdam,” and the LP’s single “Can’t Stop Loving You.”

There are some great cuts on Van Halen’s OU812 album. There is a more of a soul groove on this record than any previous Van Halen albums. You can hear it in the guitar grooves to songs like “Finish What Ya Started,” which has an Eddie Van Halen grooving riff to die for. “Black ad Blue,” is a driving force of rock and roll bliss that was a perfect album opener and featured fabulous back up vocals by Michael Anthony. “Mine All Mine,” is the album’s masterpiece. It’s a song that merged the old Van Halen with the new Van Halen. OU812 was the second Sammy Hagar Van Halen album. The record was released in 1988.

Van Halen’s ninth studio album entitled For Unlawful Carnal Knowledge stands as one of the band’s best. Its a hard rocking album in the style of the band’s best album Fair Warning. The album was released in 1991 right in the middle of Nirvana mania. But that didn’t stop Van Halen from reaching the number one spot on the Billboard Rock Album Charts with For Unlawful Carnal Knowledge. The album opened up with the hard driving song “Poundcake,” which was also released as the album’s first single. “Poundcake,” also hit number one on the Billboard Rock Songs charts. The album spawned seven singles with three of them hitting number one on the Billboard Rock Songs charts.

We saved the number on spot on our Sammy Hagar Van Halen albums ranked list for the band’s debut with Sammy Hagar entitled 5150. This was one of the most highly anticipated albums in rock and roll. The band had been interviewed in Musician magazine just before the album was released. The band sounded so incredibly excited about the album as Eddie Van Halen raved about Sammy Hagar’s vocal ability and how it was opening himself up to write more melodically And melody’s sure did fill this album. Some didn’t care for the more pop oriented sounding songs like Why Can’t This Be Love,” “Dreams,” or  Love Walks In.”  But the fact was those were incredibly well written and perfectly performed songs.

The album was not just filled with pop hits. There were some scorching rockers on the album including “Good Enough,” “Get Up,” and “Best Of Both Worlds.” On the album’s closing track “Inside,” Eddie Van Halen lets loose turning up the heat delivering one of his greatest performances on record. This was, and still is, a great Van Halen Album.