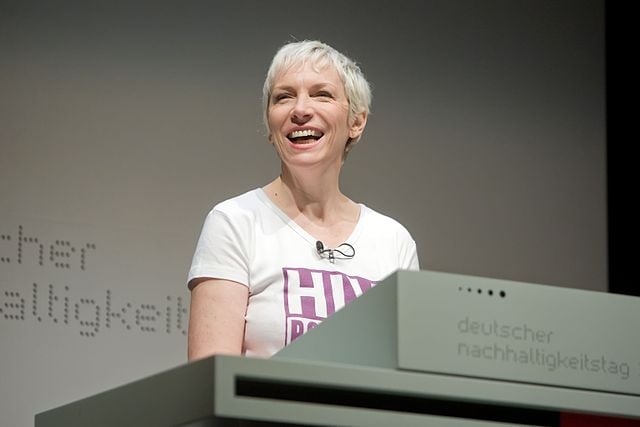 Although best known for her work on the beloved duo the Eurythmics, Scottish-born Annie Lennox has enjoyed a successful solo career. She often covers other people’s songs, but is an accomplished songwriter. Her songs are full of emotion, poetry and pain, but sometimes a ray of hope shines through. All of her songs feature her unique and remarkably flexible, soulful voice. Here are the top 10 Annie Lennox songs. Here we will be focusing on just the songs that she wrote.

The song is better known for its gorgeous video, which was the first to ever choose Amazon for its premiere. However, the song itself is worthy to be on any top 10 Annie Lennox song list. It starts off slow, builds up to a gospel-like crescendo with dark notes and a church organ, and has a poignant ending. This can be found on the 2007 album, Songs of Mass Destruction, although it first appeared on Annie Lennox’s MySpace page – back when MySpace was a thing. This was released as a single but did not do well. It has done well with fans.

This was a different kind of song for Annie Lennox – a hopeful one and one not about the end of a love affair. This was a song for all women to speak up and not give up. Annie Lennox had 23 other women singers guest star on this, including Madonna, Melissa Etheridge, Pink, Shakira, Bonnie Raitt, Gladys Knight and Dido. The official video featured a bit of a Nelson Mandela speech. The song raised money to fight HIV/AIDS in Africa. It was the second single off of the 2007 album Songs of Mass Destruction. It’s been remixed many times.

Although a vampire is mentioned in the title, and that this appears to grace the final credits of the bizarre Anthony Hopkins 1992 film Bram Stoker’s Dracula, the lyrics are not vampire-specific. They could be applied to anyone who’s experienced lost love. Add to the mix a subtle yet powerful electrical background and magnificent harmonies consisting of multiple layers of Annie Lennox’s voice and you’ve got yourself one of the best songs to appear on a 1990s movie soundtrack. Annie Lennox herself – and quite a lot of other people – disliked the movie.

It’s all too much for Annie Lennox and fans are so grateful, since it means she produced great music like Ghost in the Machine. This is a funky, piano-driven song with upbeat music, set to some pretty bleak lyrics like, “Oh, womankind was born of pain” but do not worry, she still loves you, baby. The song features some wonderful vocal gymnastics from Annie Lennox. This appears on 2007’s Songs of Mass Destruction.

Love is not only blind, it makes Annie Lennox want to slit her wrists, according to this song from 2007’s Songs of Mass Destruction. This time Annie Lennox hasn’t lost her lover but is doing all she can to keep the relationship going. This is a tense, driving song that has a powerful ending of Annie Lennox singing a cappella “So screwed up.” Amazing that this song was never chosen as a single. Do your ears a favor and check it out.

“Dying is easy, it’s living that scares me to death,” is one of the best lines Annie Lennox ever wrote. This great lyric is frames by a great song, soulful and trippy and, of course, overflowing with emotion. Comparing cold to a color was also an inspired touch. This song shows off Annie Lennox’s powerful and elastic voice, as well as her songwriting skills. The official video has a slight musical introduction with church bells not found on the album version, from 1992’s Diva. It is also noted as the first single to be released on only CD and cassette and not vinyl.

Annie Lennox is the queen of looking back on failed relationships. Here the comparison to the end of a love affair and walking on broken glass is apt, as well as “living in an empty room with all the windows smashed.” This richly-arranged tune, with an effective use of backing strings, will stay in your head for years. The cinematic video was based on the popular 1998 movie Dangerous Liaisons and featured cameos by John Malkovich and Hugh Laurie, who was then unknown in America but well-known for his comedy work in the UK.

Things are going bad for Annie Lennox here and that’s when she writes her best stuff. She makes a great comparison to walking through a city to the break-up of a love affair. As if trying to read the future, she looks at cracks in the pavement for any glimpse of her future and finds none. This also has a great tune, a hard-edged bridge and the usual gorgeous background harmonies. This is the perfect song to have a good cry to. It can be found on Annie Lennox’s 2003 album Bare.

Sometimes songs can take years to write and sometimes they take ten minutes. Why is one of the latter. Like Little Bird, this song also looks at her feelings about flying solo, although it could also be interpreted as another break-up song. With a long, slow and sinuous melody, it was an unlikely that it would ever break the top 5 list – but it did in the UK and hit #1 in Italy. Not only that, in 1992 it won the prestigious Ivor Novello award for Best Song Musically and Lyrically. Not bad for ten minutes of work. The lush video of Annie Lennox getting ready to go on stage won two MTV Music Video Awards.

As Peter Gabriel had his song about breaking from the group Genesis, Solsbury Hill, Annie Lennox has her own song that is often interpreted as her feelings breaking away from the Eurythmics. The popular video even suggests this, as many of her Eurythmics personas are shown and suitably dismissed. However, the lyrics are merely the black and white lines in a coloring book. The listener can fill in the colors with his or her own life experiences. And it also has a killer hook and you can dance to it. What more can you want? That’s why Little Bird tops our list of top 10 Annie Lennox songs. It first appeared on 1992’s Diva.