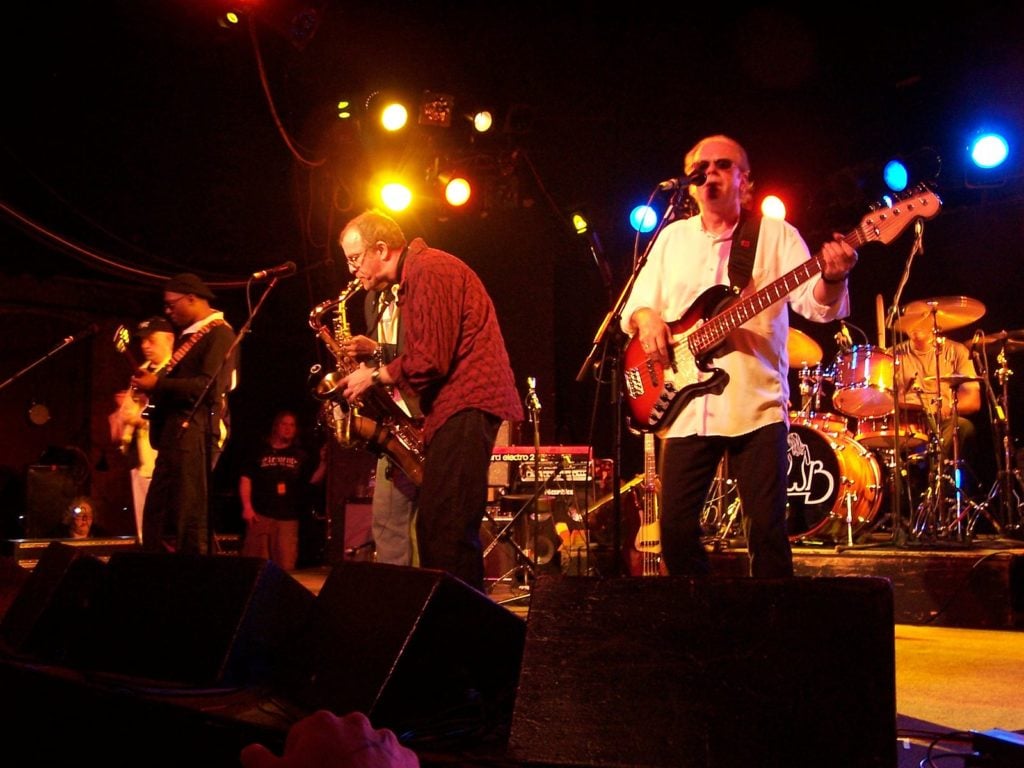 Our Top 10 Top 10 Average White Band Songs list takes a look at a band that is widely known for their 1974 smash hit single “Pick Up The Pieces.” However, the band has released a deep catalog of soulful funk tunes over over a forty five year period. The band was formed in the early 1970s in the city of London, England. The group captured their first break when they got a gig opening up for Eric Clapton. The legendary guitarist’s manager took a liking to the band and got them a record deal with Atlantic Records. The Average White Band’s first album did very little as far as commercial sales. However it was their second album titled AWB that turned the group into an instant household name.

The Average White Band have released thirteen studio albums between 1973 and 2018. Interestingly, their record companies have also released eight greatest hits albums. The group has gone through many personal changes over the years as most bands that have been together that long traditionally do. The group continued to tour throughout the 2000s and 2010s.

Our top 10 Average White Band songs list presents ten of their best songs at least in our opinion from their 1970s period.

We open up our top 10 Average White Band songs list with a track from their 1975 sophomore album entitled AWB. The song “Work To Do,” was a cover version of The Isley Brothers song that had only been released two years earlier. It seems everyone was trying to have a hit with this song because the Main Ingredient also covered it in 1973. We love the Average White Band version as it grooves to the max with the band’s soulful funk arrangement that will force you to put on your dancing shoes. The song closed out side one of the great AWB album.

It’s no secret that the Average White Band’s second album AWB was the group’s masterpiece. We could easily fill this entire list with songs from the album. But to be fair, the groups released many other great records and have a large catalog of fantastic songs. So we will have to be picky with the songs we choose from the AWB album. Nonetheless, we couldn’t leave this one out. “You Got It,” was the album’s opening track. The band knew they had a great album on their hands and they wanted to open up the record with a killer track. This one was perfect. The song was written by Average White Band members Roger Ball, Hamish Stuart and Alan Gorrie.

Continuing with our top 10 Average White Band songs list we turn back to the band’s first album entitled Show Your Hands. When the album was originally released, it failed to sell well. However, after the success of the group’s second LP titled AWB, the Show Your Hands album was reissued under a different title called Put It Where You Want It. The reissued album also presented fans with a different opening track. That killer song is presented here on this Average White Band Songs list.

We jump ahead in time with this one. The sound of 1980s R&B dance music clearly present on this great mid-tempo track called “Let’s Go Round Again.” The song was released on the album Shine. The song became a top 20 hit on the UK music charts in 1989. The song was written by Alan Gorrie.

As we enter the second half of our top 10 Average White Band songs list we turn to the great track “Queen of My Soul.” The song was released on the Soul Searching LP. That great album was released in 1976. The album featured some legendary musicians such as Michael and Randy Brecker also known as The Brecker Brothers. The LP also featured another famous pair of brothers known as Eddie and Davd Brigati of the Young Rascals. “Queen of My Soul,” was released as a single from the record. It did fairly well just making the Billboard Top 40 peaking at number 40. It hit number 23 on the UK music charts.

Well since we are on the topic of the Soul Searching LP, we just had to throw this one on the list of great Average White Band songs. “Soul Searching,” was the album’s great title track. Soul Searching was also the band’s fourth album release. The musicians in the band at the time included Alan Gorrie, Hamish Stuart, Roger Ball, Malcolm Duncan, Onnie McIntyre and Steve Ferrone.

As we start to wind down this Average White Band songs list we turn to the title track of the band’s fabulous third album entitled Cut The Cake. There were high expectations for the Average White Band to follow up their grand second album after the mega success of the single “Pick Up The Pieces.” The band surely stepped up to the plate with this one. It wasn’t easy because the group’s drummer and founding member Robbie McIntosh died of an heroin overdose in 1974.  The song “Cut The Cake,” was released as the first single from the record. The song reached the top 10 n the Billboard Hot 100 peaking at number 10. It was a also a top 20 hit in the UK. The album went all the way to number four on the Billboard Top 20 Album charts.

The Average White Band’s single “A Love Of Your Own,” is the third song from the great 1976 Soul Searching album to be placed on this Average White Band songs list. The band sounds like Earth Wind & Fire on this track. The song did not put much of a dent into the pop charts. But so what? This is a great soulful mid tempo ballad that stands as one of our all time favorite Average White Band Songs.

Not many people living on Planet Earth have never heard this one no matter what their age. The Average White Band’s classic song “Pick Up The Pieces,” was released in 1975 on their second album titled AWB. Songwriting credits for the song were given to the entire band which included Alan Gorrie, Hamish Stuart, Roger Ball, Molly Duncan, Onnie McIntyre and Robbie McIntosh. The writers have often stated that the song was about not giving up, and picking up the pieces and moving on when things weren’t going well which was usually the case for most musicians.