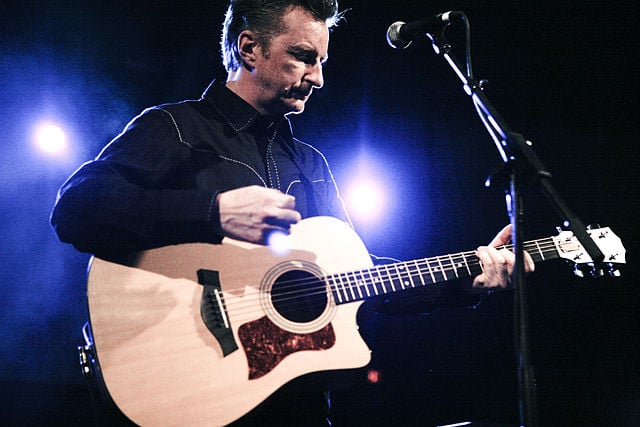 When one thinks of musicians who mix music and politics, Billy Bragg is one of the first names that springs to mind. His mixture of folk and punk has always tackled many of the biggest social issues of the last forty years, as well as many themes involving romance and heartbreak. Unlike many other artists who are happy to spout off in a song while doing very little in reality, Bragg’s track record of left-wing activism proves that he is a man who walks just as much as he talks. Here is a list of his 10 greatest rabble-rousing anthems…

Beginning this Billy Bragg song is a song where the title very much speaks for itself. It must be said that during the 1980s global Aid’s epidemic, life for a gay person was miserable in many ways. This anti-homophobia anthem from Bragg’s 1991 album Don’t Try This At Home was just the kind of righteous anger that was needed to combat the ignorant attitudes that were rife in society at the time. The song was co-written with Smiths guitarist Johnny Marr and features backing vocals from the late Kirsty McCall who was a frequent collaborator with Bragg.

This track taken from 1983’s Life’s a Riot with Spy vs Spy see’s Bragg tackling the education system and the idea of what is considered by society to be the way that young people should aspire to be a success in life. Featuring lines such as “the system might fail you but don’t fail yourself,” Bragg puts across the idea that anyone can achieve what they want by following their own path. Years later, the song was covered by Rancid guitarist Lars Fredriksen in 2001 who put his own rather good twist on it.

Continuing with our top 10 Billy Bragg songs list we turn to a song which was inspired by Billy Bragg’s love of Motown and sixties R&B. The song is taken from his third album Talking with the Taxman About Poetry released in 1986. The song is without a doubt one of the saddest songs ever written. It’s about a woman who ran away as a teenager to marry an abusive man.However, she would rather live with his cruelty than be alone. Her only source of comfort is a tape of Levi Stubbs’  favorite band the Four Tops. It was the first single to be released from the album where it peaked at number twenty-nine on the UK singles chart.

Also from Don’t Try This At Home, there are two versions of this song. The other version nit featured here was performed with the band Red Star as the backing band. It was released on the compilation album from 1999 titled Reaching to the Converted. Both versions of the track are epic, with the lyrics being about being full of youth and enthusiasm, but also looking at the consequences that come with it. It brings to mind the kind of people depicted in the films of Mike Leigh, of whom Bragg is very much a kindred spirit.

# 6 – Waiting for the Great Leap Forward

Up next on this Billy Bragg songs list is a tune from 1988 which was released as a single before being included on Bragg’s fourth album released that same year titled Workers Playtime. The song was written during a time of disillusionment after the 1987 British general election when Margaret Thatcher had won her second term as Prime Minister. Despite the bitterness contained within the tone of the song, the lyrics nevertheless have a strong sense of optimism, emphasizing that you can still continue to fight for what you believe in. It reached number 52 on the UK charts.

This track is taken from 1984’s Brewing Up With Billy Bragg. St Swithins Day is a Christian event that falls on the 15th of July. If it should rain on this day, it supposedly will continue to rain for the next forty days. Bragg does not hold this belief, nor is it the subject matter of the song. Instead, Bragg meaning of it is “a day that never comes.” The lyrical subject matter is among Bragg’s more romantic content.

The Saturday Boy is another track from Brewing Up With Billy Bragg. Here we have a classic tale of unrequited young love. Bragg very much wears his heart on his sleeve here, explaining in very intimate detail about the time he has spent with a girl who was the object of his affections, and then how she ditches him in order to pursue what she sees as more lucrative social opportunities. The song is very bittersweet and despite its morose subject matter, does contain a rather witty sense of humor.

As we close in on our number one spot we one again turn to the Brewing Up With Billy Bragg. As the title would suggest this is another romance-themed track. However, the tone of this one is not quite as overly sentimental, taking on a slightly darker vibe. The tracks prominent use of an organ gives it something of a retro feel, like something one would hear in a club in the 1960s.   Said organ is provided by Kenneth Craddock. Johnny Marr is also featured as a second guitarist.

Here we have a song from Don’t Try This At Home  in which the lyrical content is not political or romantic but rather extremely personal, being a tribute to Bragg’s late father. With the haunting piano and very soft use of guitar, this extremely emotional ballad is one that is guaranteed to bring a tear to the eye of many listeners. Particularly heartfelt is the line “Daddy, do we all have to die?”, which shows Bragg’s vulnerability with his father’s death reducing him to a child-like state.

At the number one spot on this top 10 Billy Bragg songs list is the great track “New England.” It is what is considered to be Billy Bragg’s signature song. The song combines Billy Bragg’s main lyrical concepts romanticism and politics. The song was released on the  Life’s a Riot album.