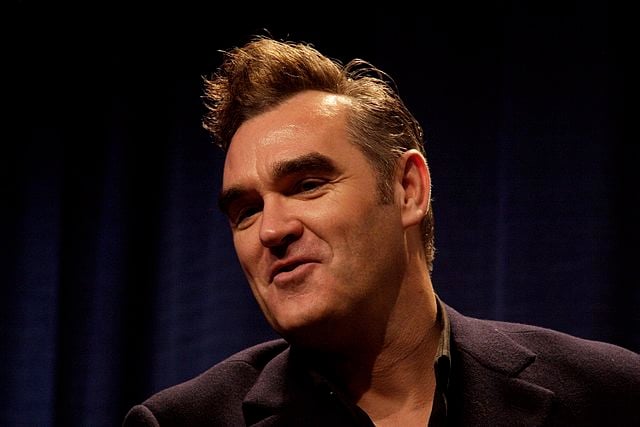 The Smiths were an eighties renunciation to all of the facsimile acts who dominated the airwaves with their vapid synthesizers and uninspiring imagination that bordered on auditory nausea; they were the UK saviors of a period allergic to guitar-driven expression. Their gorgeous and shimmering Alternative introduction to an era so caught up in its own self-absorbed over-consumption was the antidote needed for an entirely new movement of independent rock bands. They were the primordial oracles who lent their familial hand to the other lost souls of the Underground scene struggling to find their voice for a wider audience. The Smiths became the Godfathers of Britpop, inspiring the likes of Oasis, Blur, the Stone Roses, and Suede.

Guitarist Johnny Marr’s glistening, multi-layered chord creations effectuate with pop-flavored choruses was nothing anyone had ever witnessed before. The way he was able to discover these family of notes and put the kind of care and detail into their arpeggiated relationship with one another is a true testament to why he’s one of the most highly revered and influential guitarist of his kind. Plus, you can’t forget about the exceedingly sympatico creature that is Morrissey. His instantly discernible croons are what gave the Smiths their unmatched and oh so suave atmosphere, along with his sexually ambiguous, outsider persona and poetic romanticism; he was the modernized embodiment of his hero, Oscar Wilde

Morrissey isn’t your typical rock messiah; he never embraced the decadent lifestyle of sex, drugs, and acting a fool. Instead he focused on being an anomalous activist for animal rights and vegetarianism, and a self-described “monarchical abolitionist” for his vehement hatred for political leaders, British royalty, and the dictatorial rule of law that comes with the royal sentiment. The other members of the Smiths include drummer Mike Joyce and bassist Andy Rourke, who both contribute just as much as Morrissey and Marr.

Their sound is irreplaceable. Their legacy is certainly undeniable (many hold their importance and influence towards the same apex as The Beatles). They’ve inspired the entire Brit-pop movement of the nineties. They continue to usher in new generations of fans, especially that of the hipster culture. It’s also our job here at ClassicRockHistory.com to acknowledge the preeminence of these kinds of bands. It should be said right off the bat that picking songs from each other albums is not going to be easy, and this isn’t just a typical statement; their records are so great that it literally is an arduous pain trying to selectively choose from each of them.

Their debut album, The Smiths, was a formal introduction to the world in 1983; they were the original Bohemians of the Ronald Reagan era where everything was flashy and the times were much simpler. With its distinctive album cover bearing Andy Warhol

from the 1968 film, Flesh, the music was far too ahead of its time to even be produced in such an era. It produced several incredible singles, but if there’s one deep track that stands fascinatingly by itself, Miserable Lie would be just that. The jangly guitar sensibilities of Marr and Morrissey’s wild falsetto quirks which turns his romantically bleak stanzas into something almost tongue-in-cheek, makes this song a great enough inauguration for our top ten list.

By the time the Smiths put out their second record, 1985’s Meat is Murder, they were already paving their own road for success and recognition. They had produced the album themselves after being underwhelmed with their first album’s production value, thus giving them the freedom to write and record what they felt was right. For Meat is Murder

, the end result was a brash diversity rooted with contempt for animal cruelty, physical punishment in school, and abuse at home, among other topics; of course Morrissey’s dry witticisms are scattered about. I Want the One I Can’t Have is another deep cut with a wondrous stratum of chord voicing glossed in Morrissey’s sad-eyed lust that’s sure to override the senses in ways the pulchritude of music intended.

8.) Death of a Disco Dancer

Strangeways, Here We Come, the band’s final studio album, was certainly a proper send off to a brief yet empyrean career. It was the album that saw the Smiths in a different state of mind as far as musical progression was concerned; they added stringed arrangements and drum machines to their compositions, and Marr took to The Beatles’ White Album for further influence. It’s a fantastic farewell record, and with Death of a Disco Dancer, one can really hear that succulent penchant for the hard rock grooves that plagued the White Album. Everyone’s chemistry here collides interchangeably, and it should be noted that this is the only song where Morrissey plays an instrument; he can be heard towards the end jamming on the organ.

The Queen Is Dead established the Smiths as one of the greats of their time, laying the groundwork with their postmodern blend of jangle pop, punk, and second wave British invasion; it’s constantly branded as their best work, and deservedly so. Lyrically, the prose on this record has never sounded more delicately tailored with the ghosts of the Romantics, and I Know It’s Over definitely exercises that level of grief, despair, and love lost, but each vignette carries on a broken passion for existential enlightenment in every form of human emotion. And that F minor key floats calmly like mist on the ocean for added impact as Morrissey’s fatigued delivery drifts like that of a boat trying helplessly to find its way to shore.

6.) What Difference Does It Make

Morrissey has referred to this as his least favorite song he recorded with the Smiths, but that didn’t stop it from being a hit single that climbed up the UK charts. The song is famous for its electrifying riff, as well as Morrissey’s unnaturally high notes he hits towards the end. It should also be noted that when it came to Morrissey’s storytelling, he normally would stay away from pronouns, giving each songs narrative gender ambiguity; this made his lyrical prose more relatable and easier to identify with. That’s exactly what this song’s content illustrates: forbidden desire and love sickness.

This bouncy single released in 1986 is like a big ball of The Byrds and the Nuclear holocaust all baked into one surprisingly optimistic song; who wouldn’t want to be with the one they loved before the world gets wiped away from a million bombs dropping? That’s what makes Morrissey such a brilliant poet; he can take the most puerile subject and make it thought-provoking and funny, all in the same breath. The song is also the most potent representation of their voluminous overdub of acoustic and electric chimes.

Paint a Vulgar Picture is a virulent explanation of what it’s like to live in the music industry as a puppet for the corporate machine, and it’s all cloaked ostensibly in a bright and sunny sensation to the ears. The lyrics extend into a highly descriptive play-by-play of the laborious dynamics of being a commercial band. Everything from falling prey to the greed of the record companies, selling out, making millions of dollars, to living a lonely life of stardom that expensive house, pondering the remains of that fervid love for the craft. That’s at least one way of interpreting it’s meaning.

3.) Some Girls Are Bigger Than Others

Though not released as an initial single, Some Girls Are Bigger Than Others still managed to unfold into one of the band’s most critically acclaimed numbers. It’s coated with every inch of dry humor and flippancy for what can be considered beautiful, and from a technical standpoint, this probably Marr’s most inspiring guitar song; the way his soul disseminates all the way to his phalanxes to build those elaborate chord configurations into an infectious bout of head-nodding cheerfulness.

This is perhaps their signature song that I’m sure everybody has heard time and time again. It wasn’t released on any of their albums, except as a B-side single for the other non-album single, William, It Was Really Nothing. What is there really to laud that hasn’t already been expressed countless times again over the past thirty year? It’s one of their most salacious hip-moving compositions and a staple for the club scene, and the lyrics, being as simple as they are, still fumigate with that quintessential sexual ambivalence of Morrissey; the chorus, as well as the opening lines, I am the son, and the heir, of a shyness that is criminally vulgar.

I am the son and heir, of nothing in particular, were definitely one of the leading components in establishing the man as a gay icon and helped resonate with the Manchester gay club culture of that time period. Marr’s guitar riff and overall structure was inspired by a cornucopia of Bo Diddley’s syncopated shuffle, Hamilton Bohannon’s “Disco Stomp,” and Can’s “I Want More,” and the upshot turned into one of the most enduring and badass tunes in all of rock.

1.) There Is a Light That Never Goes Out

The number one position on our Top 10 The Smiths Songs list wouldn’t feel complete without writing this one off as their defining song; it’s what makes The Queen Is Dead the undisputed classic that it is. The main progression, based out of F sharp minor, was heavily influenced by the Rolling Stones’ cover of Marvin Gayes’ Hitch Hike and Marr has jokingly said in an interview that he intentionally copied it to see if people would realize that the Velvet Underground lifted the progression in their song, There She Goes Again from the Rolling Stones.

The chords are so perfect though, that Marr elevates the influence to a transcendental cloud of freehold that only he could leave his print on. And Morrissey’s grim tale of being with the one he loves before they both die in a horrible accident makes you look past the dismal nature and understand the aesthetic authenticity of his disposition; the man connects with the listener on the rawest level and turns the hopelessness of life into artistic acceptance.