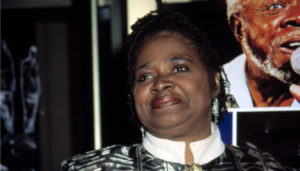 Before becoming referenced as the Queen of Memphis Soul, American singer-songwriter Carla Thomas was first born and raised in Memphis, Tennessee as one of three children who grew up in the world of music. For Carla Thomas, the steady exposure at the nearby theater, thanks to her father’s role as a master of ceremonies for amateur performers, it seemed a musical career for the songstress was imminent. Whenever not in school, Thomas would be sharpening her musical talent through routine rehearsals and performances until the day would come she’d venture on her own and make a career as a vocalist. She would become one of the premier vocalist on the legendary Stax Records label releasing hit after hit in the 1960s.

At seventeen years old and still in high school, Carla Thomas was signed with Satellite Records in 1960 and released her first record, “Cause I Love You,” which was a duet she performed with her father, Rufus Thomas. Her brother, Marvell Thomas, was the keyboardist. This record caught the attention of Atlantic Records, who signed a deal with Satellite Records to acquire rights to the record and future recordings featuring Carla Thomas. It would be the year 1961 that would officially steer Thomas down a road that would soon have her recognized as the Queen of Memphis Soul.

While Atlantic Records is the official label of Thomas’ debut album entitled Gee Whiz that would launch her into stardom and continued to work with her for a number of years, the other five studio albums belong to the Stax Record label. Stax was the name Satellite Records switched to after the exposure of both Atlantic Records and their newly acquired talent Carla Thomas officially put what was then a brand new recording studio on the map. From 1961 until 1971, Thomas enjoyed a prolific singing career. After 1971, she mostly disappeared from the spotlight until the release of two compilation albums, where the first was her greatest hits was released in 1994. The second was released in 2004, which featured previously unissued material Thomas recorded during the heyday of her career between 1960 to 1968. In 2002 and 2007, Thomas also released two live album recordings.

#10 – Cause I Love You (featuring Rufus Thomas)

The first single Carla Thomas would ever record and release would be with her father, Rufus Thomas. With the paint still fresh on the walls of Satellite Studios in 1960, it was also their first single. Although the song doesn’t appear on any big music charts, it still earned enough attention from Atlantic Records that would launch Carla Thomas into her first real taste of stardom. It also turned Satellite Records into stars in their own right as the successful debut of Carla Thomas paved the way for the company to succeed as a record label. Satellite soon changed its name to Stax Records.

The single, “Lovey Dovey,” was originally recorded and released by The Clovers in 1954 and still remains the best version to ever reach the music charts. The duet version from Otis Redding and Carla Thomas they performed together in 1967 would be released in 1968, shortly after Otis Redding’s death. On the music charts for the duo, the song peaked at number twenty-one on the US Billboard Hot R&B/Hip-Hop Songs and at number sixty.

“A Love of My Own” was a single that would have a song performed by Carla Thomas that would earn a chart position for the second time in her music career. In 1961, on the US Billboard Hot R&B/Hip-Hop Songs chart, it peaked at number twenty while on the US Billboard Hot 100 it peaked at number fifty-six. Although the song didn’t chart as well as the previously released single, “Gee Whiz,” it still earned Stax Records the recognition it needed to bring on a talent pool of stars, including Otis Redding.

The song, “I’ll Bring it Home to You,” was released in September 1962 and had since reached number nine on the US Billboard Hot R&B/Hip-Hop Songs chart and at number forty-one. It was originally written and recorded earlier in the same year by Sam Cooke.

The duet performance of “Call Me A Fool” is the most recent recording from Carla Thomas as she paired up with Valerie June. After it was released in January 2021, the song peaked at number twenty-four on the US Billboard Adult Alternative Airplay chart. It was the first single from Valerie June’s third studio album, “The Moon and Stars: Prescriptions for Dreamers.”

Originally recorded and released in 1966 by Eddie Floyd, the 1967 duet version of the single, “Knock on Wood,” by Otis Redding and Carla Thomas reached number eight on the US Billboard Hot R&B/Hip-Hop Songs chart and number thirty on the US Billboard Hot 100. Knock on Wood is one of three charted singles from the collaborative album, King & Queen which Stax Records released on March 16, 1967.

The duet performance of “Tramp” with Otis Redding, peaked on the US Billboard Hot R&B/Hip-Hop Songs chart at number two when it was released in 1967. On the US Billboard Hot 100, the song peaked at number twenty-six. The song was originally written, recorded, and released by Lowell Fulson in 1967, which was covered by Otis Redding and Thomas that same year. It would be this duet version that would also make the song an international hit when it peaked on the UK Singles Chart at number eighteen. Tramp was one of the three hits from the collaborative album, “King & Queen,” that had featured the dual performance of Otis Redding and Carla Thomas.

The single “Gee Whiz (Look at His Eyes),” didn’t receive much attention when it was first recorded in 1960. However, after the song was brought to the attention of the record labels of Atlantic and Stax, enough recognition of the song finally had it on the airwaves in 1961. On the music charts, Gee Whiz peaked at number five on the US Billboard Hot R&B/Hip-Hop Songs chart and at number ten on the US Billboard Hot 100.

The Ghost Inside Albums Ranked

Why Paul McCartney Is The Greatest Musical Artist Of All Time