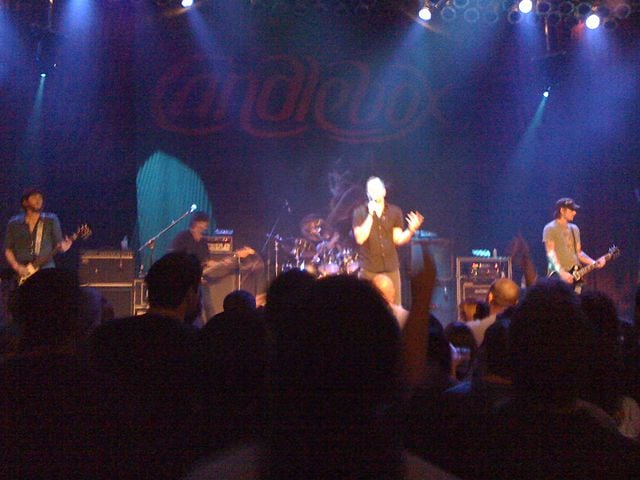 It is safe to say that during the early 1990’s, Seattle was the place where rock music was being taken in the next direction. Whilst certain other bands may have been taking the world by storm, with this article about the band Candlebox we are looking at a band who were in the right place at the right time but for some reason, although they were successful during their initial run, were very much overlooked in favour of bands such as Nirvana and Alice In Chains.

Formed in 1990, Candlebox released their self-titled debut in 1993 which contained several successful singles and sold well. They would release two more albums over the course of the decade which were both also successful so much that they got to open for heavyweights such as Rush and Metallica. However, it would seem that by the end of the decade Candlebox’s time had had come and they split up in 2000.

However, after being defunct for six years, Candlebox reformed in 2006 and have gone on to record three more albums which have all been very good and successful enough to warrant them remaining together to this day, with a new record scheduled for release later this year. So here at Classic Rock we are going to show you the ten best songs from an underrated band who some of you readers may not be familiar with. Enjoy!

Kicking off our Top Ten Candlebox songs list is the lead single from their most recent album released in 2016 titled Disappearing in Airports. It was the first album not to feature guitarist Peter Klett, leaving vocalist Kevin Martin as the sole remaining original member. Dave Krusen formerly of Pearl Jam returned to play drums for this album.

Next on the list is this track from Candlebox’s fifth album released in 2012 titled Love Stories and Other Musings. The album was very well received critically, being considered by several critics to be the band’s best work. It reached number eight-two on the Billboard 200 and number twenty-five on the Rock albums chart.

This next song is the title track of Candlebox’s fourth album released in 2008 which was their comeback album after their reformation. The nucleus of the record came about when Kevin Martin was writing for his other band Hiwatts and a song that he wrote reportedly felt too much like a Candlebox song. The reformation came about when he and Peter Klett met to discuss a Candlebox best of compilation that was put out in 2006.

Up next is the opening song and lead single from Into The Sun. This song is a political song that was written about the re-election of then-president George Bush and the band’s frustration that people where “stupid” enough to vote for him a second time round. Although this may have seemed confrontational, it did not do the band or the song any harm as it received a considerable amount of radio airplay.

This track is the opening single from the album Happy Pill in 1998 that was the band’s last of their initial time together. This was Dave Krusen’s first album with the band after he replaced Scott Mercado on drums. The album was not as successful as the two that came before it and they would decide to split up soon afterwards.

This was Happy Pill’s lead single and charted well getting to number two on the mainstream rock charts and number thirty-two on the Us Modern Rock chart. The band filmed a music video for it but after dissatisfaction with the original finished product they scrapped it and filmed a completely new version.

This is the lead single and opening track of Candlebox’s second album released in 1995 titled Lucy. Although the album was not as successful as their first record, this received a decent amount of airplay and charted successfully, reaching number twelve on the US Modern Rock charts and number five of the US Mainstream Rock Charts.

This was the second single taken from Lucy that was not as successful as “Simple Lessons” but did chart at number nineteen on the Mainstream Rock Charts. Like the other singles a video was produced for this song and is remembered for having the band perform underwater as well being directed by acclaimed filmmaker Gus Van Sant.

Just off the top spot is the third single from the band’s self-titled 1993 debut. It is one of the band’s best known songs and charted very successfully , being their most commercially successful song reaching number eighteen on the Billboard 200 where it would remain for almost a year. It also reached number four on the Album Rock Tracks and seven on the Modern Rock Charts. The song is one of several songs written during the era written as a tribute to the Andrew Wood of fellow Seattle band Mother Love Bone who died of a heroin overdose. This single actually helped the album to chart because despite being released in 1993, it did not enter the charts until the following year when this song was successful and helped the album to sell and peak at number seven which is the band’s highest chart position to this day.

At the top of our top ten Candlebox songs list we have the second single also taken from the first album. It is also one the best known Candlebox tracks and got to number seventy-eight on the Billboard Hot 100 upon its initial release. It also got to number six on the Billboard Album Rock Tracks. The song’s lyrics are a true account of a time when Kevin Martin stole money from his parents when he was struggling with drug addiction. Despite selling well, the album was met with a mixed critical reception with some critics feeling that the band were a poor imitation of the more successful Seattle bands of the era.