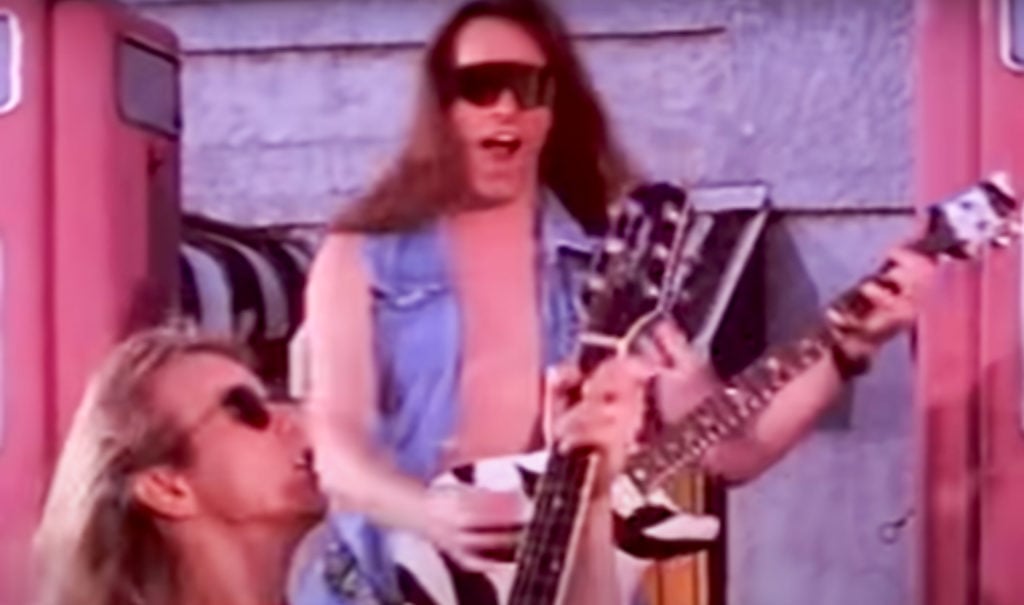 A talented mix of gentlemen came together in 1989, with a little help from John Kalodner. This “supergroup” is an American rock band that goes by the name of Damn Yankees. The band consists of Tommy Shaw (vocals/guitar), Jack Blades (vocals/guitar), Michael Cartellone (drums), and the most iconic guitarist since Jimi Hendrix, Mr. Ted Nugent (guitar/vocals). These four talented musicians came together because their careers at the time were in a funk. Shaw’s solo career had stalled. Jack Blades (bass player for Night Ranger) wasn’t sure where to go when the band split. Kickin’ guitarist Ted Nugent was in a lull in his career after rockin’ it hard for 11 years. Michael had played drums in Shaw’s solo band and was invited to be the drummer for Damn Yankees.

Essentially, Damn Yankees were only together from 1989-1993 and only recorded two studio albums. They also have a ‘greatest hits’ album. In February 1990 Damn Yankees released their self-titled debut album. The album was certified double platinum in 2004. It included hits like, “High Enough,” “Coming of Age,” and “Come Again.” Damn Yankees has a song, “Bonestripper” on the Nothing But Trouble Soundtrack, which was released in theaters in 1991. Don’t Tread is the second studio album by Damn Yankees. This album was released in August 1992 and would be the band’s final album together. The Don’t Tread album produced “Where You Going Now,” a power ballad that was their second-highest chart-topper.

The Top 10 Damn Yankees Songs are coming up below. Make sure you take a listen during your reading or after. They have some outstanding music!

Coming in at the number ten spot on our list, “Mystified” is from the Damn Yankees album, Damn Yankees. It has killer guitar playing at the beginning of the song. Jack belts out the vocals There is more of a soft rock vibe to the song, even where there are guitar solos. The song is good, fast-paced, and catchy. Noting like what you would expect from a bad that has Ted Nugent as their lead guitarist. The album, Damn Yankees, was released in 1990. “Mystified” is the seventh song on the album.

Also from their debut album, Damn Yankees, we have “Bad Reputation.” The guitar, in the beginning, is a lot harder rock sounding and exactly what you would expect from Nugent. Another very catchy song, this is definitely a band I could get behind and listen to. Though it is still on the “softer” side, the vocals are amazing. Everyone’s voices meld together so well during the melodies. There is a touch of Styx and Night Ranger in their music, but that is not a bad thing. They were extremely great bands as well. Damn Yankees put out some great songs in the short time that they were together and I have included most of them on this list of Top 10 Damn Yankees Songs.

From Damn Yankee’s second studio album, Don’t Tread, released in August 1992 we have “Silence is Broken.” This is more of a ballad, with a killer guitar solo by Ted. Tommy Shaw and Jack Blades who take turns on vocals on most of the songs, do an outstanding job. “Silence is Broken” was released in March 1993. Unfortunately, there is not a lot of information or reviews for this particular song. Damn Yankees were an underrated band, and a lot of the songs that fans love were underplayed on the radio. They didn’t get as much recognition as they should have for all of their hard work and musical talents. I think this song is extremely well done, the melodies are amazing and as always the guitar playing is off the charts.

Let’s see … the song “Damn Yankees” is on their debut album called Damn Yankees and the band is called Damn Yankees. Nice! One other band to have a song and an album named after the band, Bad Company. This song/album was released in 1990. Ted Nugent just shreds on the guitar throughout the whole song. Extremely upbeat, catchy, and topped with killer guitar; just what a good rock song consists of. Damn Yankees has excellent music! Vocals, lyrics and guitar is all put together so amazingly. It is balanced, sounds great and the song “Damn Yankees” is a little bit on the harder scale. This is one song that I never really heard “back in the day.”

From Damn Yankee’s second studio album, Don’t Tread, peaked at number 22 on the Billboard 200 charts. “Don’t Tread on Me” starts off with a kickin’ solo by Nugent. One of the harder songs that Damn Yankees has released. Almost three minutes into the song there is a spectacular guitar solo. Jack Blades does an outstanding job on the vocals for “Don’t Tread on Me.” He has a deeper voice, which helps the song have that edgier/harder sound. “Don’t Tread on Me” reached number 62 on the charts in 1992.

Our number five song on the Top 10 Damn Yankees Songs list, comes from the debut album Damn Yankees. “Runaway” is about a sixteen year old who leaves home, for what she thinks is “better” things in life. Once she gets there she begins to wonder if she made the right decision and if it is too late to turn back. Again, Ted Nugent rocks the guitar, with a hard rockin’ riff at the start of the song. The song, in a way, reminds me of Poison’s “Fallen Angel.” “Runaway” has been said to be one of the best songs by Damn Yankees with a couple coming in at a close second.

This song is off of their debut album. It is also the song that most people associate with Damn Yankees. “High Enough” is a well written ballad. It was an extremely popular song when it came out in 1990 and still is to this day. The lyrics are beautiful, the vocals/melodies are outstanding, and it is an all-around great song. “High Enough” is Damn Yankees best selling single. It peaked on Billboard 100 charts in the third slot. The song was number two on the Mainstream Rock Tracks charts. A song that was just as great and huge as a senior in high school, as it is today when I listen to it.

This is the second single released from the debut album, Damn Yankees. “Coming of Age” is a fast-paced, catchy song, centered around becoming ‘more mature/adult.’ The song was actually written at Jack Blades house during a rehearsal. They guys were scattered throughout the house and they were just playing different things in between breaks and it kick started the writing of “Coming of Age.” It topped out at number sixty on the Billboard 100, but did peak at number one on the Mainstream Rock Tracks chart. “Coming of Age” was heavily played on the radio, but for some reason it just didn’t do well on the Billboard charts. The guitar solo in this song is one of the best, by Ted Nugent, while being a part of the Damn Yankees.

This song peaked at number fifty in 1991 on the Billboard charts. “Come Again” is also from the debut album, Damn Yankees, which hit number thirteen on the Billboard 200. A very mellow, acoustic guitar solo opens this song. You get the illusion that it is going to be another ballad… and then BOOM! One and a half minutes in you get and amazing guitar riff by Mr. Nugent and the vocals take on a harder sound. Tommy’s and Jack’s vocals blend so well together that sometimes you can not tell which one of them is singing. It is in every Damn Yankees song that they have produced. Everything about Damn Yankees just works, and it stinks that they only produced two albums.

Peaking at the number twenty slot in 1992, is our number one song on the Top 10 Damn Yankees Songs list, “Where You Goin’ Now.” “High Enough” may have ranked better on the charts and is the song that the Damn Yankees are most known for. But, “Where You Goin’ Now” is one of my personal favorites, along with many other fans. It is from Damn Yankees second studio album, Don’t Tread, which hit number twenty-two on the Billboard 200 in 1992. Jacks vocals are tremendous!

Damn Yankees is a great band that still has a couple very popular songs. The bands that they were a part of before, Night Ranger and Styx, are also great in their own right. These four musicians coming together was one of the best things to happen in 1989. It was towards the tail end of the “hair band/glam metal” era and just before the “grunge-rock” seen. I believe that they came into the picture at the perfect time, but I do wish that we could have received more than two great albums from the Damn Yankees.