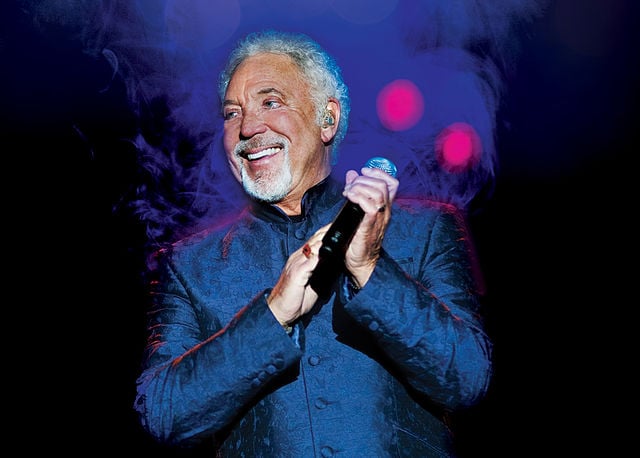 Some people may ask “hey is Tom Jones really rock and roll?” Well if you ever seen the man in concert you’d be able to answer that question yourselves. This man has been one of the most exciting performers in show business for the past 60 years. The man knows how to entertain, light up the stage and give you one heck of a show. The guy could sing his heart out and made women pass out more than any other musical act including Elvis Presley and The Beatles. As far as commercial success, Tom Jones has sold over 100 million records and had close to 40 top 40 hits in the United Kingdom and almost 20 in the United States. His biggest commercial success occurred in the 1960s. Tom Jones has  remained relevant in show business since the day he arrived on the scene. He even out did Prince on the song “Kiss.”

In 2021 the man is still releasing the music. This list took a long time to write because there were so many songs to listen to and we found ourselves just not wanting to skip through any of them as we thoroughly enjoyed the music from start to finish.

Our Top 10 Tom Jones songs list takes a look at 10 of the most enjoyable, popular and fun Tom Jones songs ever released. We hope you enjoy this one. We had a blast putting it together.

We open up our top 10 Tom Jones songs list with the Tom Jones version of the classic track “Black Betty.” This old early 20th century song often credited to Huddie “Lead Belly” Ledbetter that has being done many times over the years, became most popular with Ram Jam’s version in the late 1970s. Tom Jones updates the song even more in this amazing recording released on the album Mr. Jones in 2003. The song was released as a single from the record and hit number 50 on the UK Pop charts.

Prince has always been regarded as one of the greatest songwriters musicians and performers of all time. But if any one man could outduel him on the concert stage is was this man Mr. Tom Jones. This great 1988 recording brought Tom Jones back into the spotlight big time. In collaboration with the band Art Of Noise, Tom Jones released this great Prince song as a single that would become a top 10 hit in various countries around the world. “I think I got to dance now!”

In proving our point as to how relevant Tom Jones has continued to be, just take a listen to this new song released just recently in 2021 entitled “I’m Growing Old.” It’s just Tom Jones and a piano and vocal, organic and as genuine as it gets. It reminds me of the old Tony Bennett Bill Evans album. This is one of the most harrowing, most difficult and most important songs Tom Jones ever released. It’s straight to the point and it’s hard to listen to, but it’s essential nonetheless. We just felt this was an important one to add to this list.

Okay well on a lighter note, let’s get back to the fun ones. Although this is more of a heartbreaking song, it showcases that country side of Tom Jones. This is not the song that Burt Bacharach wrote for Dionne Warwick. This is an entirely different song. The song “I’ll Never Fall in Love Again,” was released as a single by Tom Jones on his 13 Greatest Hits album in 1967. The song went to number two on the UK Pop Charts. The song was written by Lonnie Donegan and Jimmy Currie in 1962.

In the number six spot on our Tom Jones songs list, we begin to present some of Tom Jones biggest hits singles of his career. The song “Green, Green Grass of Home,” was recorded by Tom Jones in 1966. The song would become one of the biggest hits of his career as it hit number one around the world. It hit number one on the UK singles charts and also in Norway, in Ireland, in Belgium and in Australia. It peaked at number 11 in the United States. The song was written by Claude (Curly) Putman jr.

At the halfway point on our top 10 Tom Jones songs list, we take a listen to his fabulous recording of the legendary song “Delilah.” This is one of the greatest vocals of Tom Jones career. The song was released by Tom Jones as a single in December of 1967. Boy was this one a big hit. The song hit number one in Belgium, Finland, France, Ireland, the Netherlands, Switzerland and West Germany.The song “Delilah”  peaked at number two in the UK but only reached the number 15 spot in the United States on the US Billboard Hot 100. While Tom Jones was a big star in the United States, he was a far bigger star around the world especially in Europe and the United Kingdom where he was from.

There have been many great James Bond themes recorded throughout the motion picture’s iconic run over the years. Tom Jones recording of “Thunderball,” stands as one of the best of them. The song was released in 1965 as a single from the albums’ motion picture soundtrack. The song would become a top ten hit in Belgium, Canada and Austria. The song peaked at number 35 in the United Kingdom and reached all the way up to the number 25 spot in the United States on the Billboard Hot 100. Tom Jones vocal on this is extremely powerful and fit the opening credits perfectly.

As we begin to wind down our Tom Jones songs list we feel kind of bad that there’s so many songs missing but this is one that we had to include. The great song “It’s Not Unusual,” would become one of Tom Jones signature songs. It’s the song that turned him into a worldwide star. It was only his second single release issued in 1964. However it went straight to number one in the United Kingdom on the UK pop charts. The lead guitar part on the track was credited to Jimmy Page of Led Zeppelin. Of course this is about five years before Led Zeppelin was formed. Supposedly, Elton John who was an unknown at the time also played piano on the track after being recruited from a club he was playing at across the street from the recording studio where Tom Jones was cutting this great track.

In the number one spot on our Tom Jones songs list, is this  fabulous recording of the song “She’s a Lady.” This stunning song was written by the legendary Paul Anka who also wrote one of Frank Sinatra’s biggest hit singles of his career in the track my way. Tom Jones recorded the song She’s a Lady in 1971. The song went all the way to number 2 on the US Billboard top 100 making it the biggest hit Tom Jones ever had in the United States. The song Hit number one in Canada and also became a top ten hit in Belgium, the Netherlands and Norway. The video defines the early 70s and the Tom Jones Persona so perfectly. Don’t miss this one!