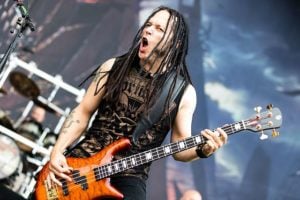 Our top 10 Disturbed songs introduce us to an American band known for its exquisite hard rock, heavy metal, alternative metal, and nu-metal vibes. The band initially went under the name Brawl, with the original lineup comprising bassist Steve Kmak, drummer Mike Wengren, and guitarist Dan Donegan. However, they would change their name to Disturbed after having vocalist David Draiman on board. Soon after rebranding themselves to Disturbed, the band recorded two three-track demo tapes with the artwork composed of the mascot, The Guy. Eventually, Disturbed signed with Giant Records, with whom the band released their debut album, The Sickness.

Success came knocking on the band’s door after the release of their debut album, which peaked at number twenty on the Billboard 200, selling over four million copies. Disturbed went on to release more studio albums, with their total tally amounting to seven. Five of the band’s seven albums have consecutively debuted at number one on the Billboard 200, making Disturbed a rare gem in music history. While they went into hiatus in 2011, the band returned with a bang releasing their 2015 album Immortalized. With over seventeen million records sold worldwide, Disturbed is one of the most successful rock and metal bands of the modern era alongside bands such as Godsmack and Slipknot. Our top 10 Disturbed songs list looks at the most popular releases from the band whose music lyrics are majorly inspired by the members’ experiences and fantastical themes.

Opening our list of the top 10 Disturbed songs is the ballad “Stupify,” the first single from the band’s debut album, The Sickness. The song is an original composition by the band members, having it reflect on racism and discrimination. Its inspiration followed a relationship David Draiman had with a Latina girl that was disapproved by his father on the grounds of ethnic differences. Unlike most of the best Disturbed songs, “Stupify” is a synth-led song. The song peaked at number twelve on the US Mainstream Rock Tracks Chart.

Disturbed’s second studio album Believe was set to succeed following its magnificent first single, “Prayer.” Written by vocalist David Draiman, the song is inspired by his grandpa’s death and several circumstances after 9/11. “Prayer” is more of a conversation between David and God where David tells God to bring it on if he is trying to use pain to provoke his response. The song peaked at number eighty-five on the Billboard Hot 100 Chart and is the second highest-charting single on the chart.

“Inside the Fire” is a sad though alluring song featured as the lead single from the band’s fourth studio album, Indestructible. Written by David Draiman, Dan Donegan, and Mike Wengren, “Inside the Fire” is a racy song that features suicidal themes. The song is about a guy who contemplates plunging into the afterlife in the hope of reunifying with his deceased fiancée. David Draiman revealed that “Inside the Fire” is the band’s darkest song so far, quoting that it was cathartic to make the song since this was him when he was a teen. The song peaked at number sixty-three on the Billboard Hot 100, having it nominated for a Grammy Award for the Best Hard Rock Performance.

Rarely do we have people realize the amazing work and effort put in by the soldiers. Disturbed have on occasions played their music at military bases to honor them and even went further to release the song “Indestructible,” which is regarded by many as an anthem to soldiers. The album-titled song is meant to encourage soldiers as they head to the battle while boosting their morale. The spirited lyrics of the song were instrumental to having the song peak at number seventy-two on the Billboard Hot 100.

Disturbed shot themselves to even higher heights with the cover of the Genesis hit “Land of Confusion.” The song was initially written by Genesis’ guitarist Mike Rutherford, which served as a rare political song for the rock band. “Land of Confusion” questions the wisdom of the global leaders at a time when the United States and Russia were adversaries, with a nuclear war being part of the subject. Disturbed featured the song in the third studio album, Ten Thousand Fists. The band would make a few changes in the lyrics, with the original bridge replaced with a solo from guitarist Dan Donegan.

“Stricken” is one of the best Disturbed songs to feature a guitar solo. Written by the band members, the song talks about the hurt Disturbed’s vocalist was made to go through by a woman. In the lyrics, David seems to quote that he cannot forgive himself as if it was his fault for his misfortunes. The song peaked at number ninety-five on the Billboard Hot 100 chart and was gold certified by RIAA for selling over half a million copies.

Number four in our top 10 Disturbed songs is “The Light,” which critics praised for its exceptionally uplifting lyrics. Written by Disturbed for their 2015 album Immortalized, “The Light” lyrics are quite unusual within the album. The song’s message is about positivity even in the dark experiences of life. “The Light” is characterized by unique, evocative keyboards and heavy but sublime guitar riffs with a towering vocal. The song went on to reach the top of the US Mainstream Rock Chart.

“The Vengeful One” marked the first Disturbed released after the band’s four-year hiatus. Vocalist David Draiman revealed that the band’s mission was to leave at their peak and resume their art when the members felt reinvigorated. Featured as the lead single to the 2015 album Immortalized, the song is a personification of The Destroyer or the Angel of Death looking over humanity. “The Vengeful One” went on to peak on the US Mainstream Rock Chart.

Recorded in 1999, “Down with the Sickness” was released on the band’s album The Sickness. The electrifying nu-metal ballad is about how society treats people who are different from the majority. As quoted in the song’s lyrics getting down with the sickness is a call to accept people for who they are. The song has since been one of the best Disturbed songs and a concert favorite. “Down with the Sickness” has been regarded by many as one of the most magnificent songs of the 21st century. It peaked at number four on the US Bubbling Under Hot 100 Singles Chart.

Number one on our top 10 Disturbed songs list is the famous cover by the band “The Sound of Silence.” While “Down with the Sickness” might be the band’s best original song, this cover takes Disturbed to another level of their art. Initially, the song was written by Paul Simon and released by the duo Simon & Garfunkel. The song is about a man’s lack of communication with his fellow human being. At its time, the song peaked at number one on the Billboard Hot 100. Disturbed’s cover hit number one on the US Mainstream Rock and Billboard Hard Rock Digital Songs charts.