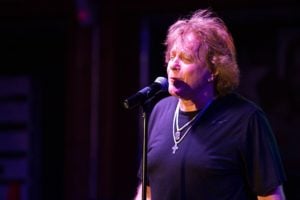 Our Top 10 Eddie Money Covers songs article presents ten great versions of classic rock songs that Eddie Money put his own mark on. Throughout his career, Eddie Money did not really record many covers songs on his solo records. Eddie Money was not only a great rock ‘n’ roll singer, he was an incredibly prolific songwriter. Eddie Money wrote the majority of the original songs on his records along with his steady writers he constantly worked with. It wasn’t until the end of his recording career when he began releasing cover material on a consistent basis. In 2007,  he released an album of 1960s covers. Two years later he released two EPs of covers songs that were released as digital downloads only. Of course, over the years a handful of cover songs did show up on his studio albums starting with his debut record. Our Top 10 Eddie Money Covers songs article picks out ten of the best from all time periods in Eddie Money’s career for what we hope will be an enjoyable and interesting article for Eddie Money fans.

We open up our top 10 Eddie Money Cover songs list with the fabulous song entitled “You Don’t Know Me.” The song was released on the album entitled  I Wanna Go Back. As this was an album that consisted of all covers, it’s an album that will appear on this Eddie Money Cover songs list a few times. The song “You Don’t Know Me,” is one of the most covered songs in music history. The song was originally written back in 1962 by Eddy Arnold and Cindy Walker. Although most of the song was written by Cindy Walker. It’s been covered by artists such as Elvis Presley, Van Morrison, Bette Midler, Emmylou Harris and so many other greats. Eddie Money lays out his New York style vocal groove and delivers a soulful rendition of a classic song.

Continuing with our top 10 Eddie Money Cover songs list we take a listen to the great song entitled “Peace In Our Time.” The song was originally recorded and released by singer Jennifer Holliday in 1988 for the Summer Olympics being held in South Korea  in 1988. Eddie Money recorded the song in 1989. Cliff Richards recorded the song four years later in 1993. The song “Peace In Our Time,” was composed by Andy Hill and Peter Sinfield.

In the number eight spot on our top 10 Eddie Money Cover songs list we present the  classic rock song entitled “Good Lovin.” There’s nothing like a little Rascals on your CD platter. This furious rocker was first released by the The Olympics in 1965. However it was The Young Rascals version that became the big hit when they recorded the song in 1966. Eddie Money’s version is very faithful to The Young Rascals version right down to the note for note organ solo. The Eddie Money version song was released on the album entitled I Wanna Go Back. The album was released in 2007.  “Good Lovin.” was composed by Rudy Clark and Artie Resnick.

This one kind of just made sense if you think about it. And that’s pretty much all we have to say on that. Eddie Money covered the classic Beatles tune “Ticket To Ride,” on his Cover EP Volume Two. The two volume Cover EPs were released as digital downloads only in 2009 on Gigatone Records. Not many fans know about these releases, but they are a lot of fun to listen too and happened to fuel the idea behind this article.There is a rawness in these recordings that is very much captivating. A certain sense of a garage band sound meets early Rolling Stones.

# 5 – She Came in Through the Bathroom Window

Eddie Money adds a lot of New York City soul to this classic tune. At the halfway point on our top 10 Eddie Money Cover songs list is Eddie Money’s spectacular version of the Beatles classic ” She Came In Through The Bathroom Window.” Eddie Money and his band stretch out on this one adding a lot of funk and groove in the mix. Some rhythmic horns and some short snazzy solos add to the good time feeling. The song was issued on the EP entitled Covers EP Volume one.  It was released in digital format only in 2009 on Gigatone Records.

Eddie Money seems pretty pumped up for this one as he explains that Jackie Wilson has always been one of his favorite vocalists which makes sense because they both share many of the same phrases in their vocals styles. At the number four spot on our top 10 Eddie Money Cover songs list we present the song “Higher and Higher.” The song was originally released  by Jackie Wilson on the album entitled Higher and Higher.  The album was released in 1967. Jackie Wilson had a number one single with the record. The song was composed by Gary Jackson, Raynard Miner, and Carl Smith. Eddie Money released his version on his 2007 I Wanna Go Back album.

Well here’s one you might not have been expecting. Eddie Money covers Green Day. In many ways it makes a lot of sense. Both artists are incredibly passionate performers and songwriters. They both have an edge to them with a devil may care attitude. And most importantly they are genuine artists. Additionally, it’s a great song. Eddie Money delivers his own take on the song adding a little bit of his New York sensibility to the pocket resulting in a win. Eddie Money’s version was released on the Covers EP Volume Two.  Green Day had a top 10 hit with the song. It was released on their 1995 album entitled Dookie.

After listening to so many of the cover songs recorded by Eddie Money, it became apparent which ones worked and which ones did not. It seemed the one common denominator in which all the ones that just seemed to really work well, were the ones that Eddie Money found the pocket. If he didn’t feel comfortable singing the song and just couldn’t find his groove, it just didn’t work. But on this one, Eddie Money found the  groove so perfectly where he laid out in the pocket like a veteran rock and roll soul singer it became a magical performance. Just take a listen to this great Mitch Ryder cover.

We close out our top 10 Eddie Money Cover songs list with the great Eddie Money cover of the classic Smokey Robinson song “You’ve Really Got A Hold On Me.” This one starts out with just a simple slick guitar riff that’s met by Eddie Money’s shout as the hi hat drops in setting up the next magical three and a half minutes. I have always really loved this recording by Eddie Money I bought this album when it first came out in 1970s when I was still in high school. It was just one of those records that all of us connected with right away. Everybody connected with Eddie Money, he was just so genuine. The song’s placement as the second track on the record was so perfectly picked as it’s rhythm was in stark contrast to the album’s opening song “Baby Hold On.” Eddie Money’s version sounded nothing like the original by Smokey Robinson. It sounded nothing like the Beatles version. This was Eddie Money making his claim on a classic song on his first album. The only cover song on the record. It will forever remain our favorite Eddie Money cover song.