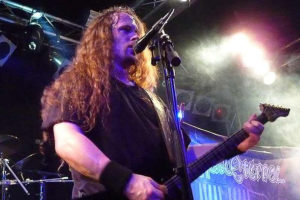 Fronted by one of the strongest death metal vocalists who goes by the name of Eric Rutan, Hate Eternal have earned a reputation as one of the heaviest metal bands of our era. If someone asked me what death metal feels like, I would probably hand them a copy of the band’s 2015 album, Infernus, which is an incredible masterpiece that portrays the band’s intensity. In addition, the album features Eric Rutan’s punishing riffs combined with screams that would appeal to even the heartiest death metal fans.

Eric Rutan is highly regarded in the death metal circle, having been instrumental in the production of some of the greatest extreme-metal albums of all time for bands such as Cannibal Corpse, Vital Remains, and Tombs. Although he has had considerable success in recording, his discography as a musician is more impressive. Eric Rutan founded Hate Eternal in 1997, and the band has released five albums over the years.

If you listen closely to the band’s earliest material, you will realize that it is pretty similar to what Eric Rutan had done during his stint as a record producer. Some of the albums, such as I, Monarch, and Infernus, have set the bar for numerous younger bands to measure themselves. The band’s biggest strength is in their approach, where they are able to kind of speed the classic American death metal and combining them with a marvelous dissonance. If you are a fan of the band, you will definitely enjoy our top ten Hate Eternal songs. However, if you haven’t checked them out before and you are a fan of death metal, you can start with some of the songs on our list.

The number ten track on our list is the ninth track from Hate Eternal’s classic album, I Monarch. “Sons of Darkness” is one of the most impressive songs from the album. The mid-paced yet atmospheric track features some haunting lyrics that talk about judgment day. The flow of the song is outstanding, and the instrumentals are exquisite.

Although their 2002 album, Kings of All Kings, is not the most fantastic piece of death metal in terms of creativity, it is certainly a good listen. “Powers That Be” is the tenth track from the album Kings of All Kings and whose black metal video was noted on MTV2’s Headbanger’s Ball. Like the rest of the nine brutal cuts in the album, “Powers That Be” features some impressive guitar works and guttural vocals.

I, Monarch, is probably Hate Eternal’s most loved album. “Faceless One” is the tenth track from the album. The song has some catchy lyrics and runs for about four minutes and thirty-nine seconds. Listen to this track and understand why the band is highly rated in the death metal circle.

This track is my favorite from the band’s 2011 album, Phoenix Amongst the Ashes. The catchy track features some fantastic guitar work, and the songwriting is in another league. However, the track still retains the brutal and gruesome edge that we have come to associate the band with. Like most other songs in the album, this song displays the band’s expanding dynamism and intensity while also showing how they have integrated various differences in a heavy manner.

Hannes Grossmann, the band’s drummer, is probably Hate Eternal’s best recruit since the band was formed. His work on the drums makes this song even better. Eric Rutan also gets a chance to show us how better he has evolved as the band’s lead guitarist. “What Lies Beyond” is the second track from the band’s 2018 album, Upon Desolate Sands.

“Zealot, Crusader of War,” is another destructive track from the band’s sixth album and the second album to feature J.J. Hrubovcak as the bassist. In this track, the band goes full-on blast with a great intro and amazing vocals. If you enjoy most of the band’s earlier music, you will definitely enjoy this track.

This track is the actual definition of the phrase “stuff of dreams” in death metal terms. The track is contained in Hate Eternal’s 2018 album, Upon Desolate Sands. The track is akin to a soundtrack of a violent scene in a movie where jabs and kicks come from all sides. “All Hopes Destroyed” is six minutes of brutal but beautiful music that features an incredible solo guitar and impressive vocals.

“The Stygian Deep” is a clear representation of what death metal is all about. As the title of the song suggests, the song is about a trip to the River Styx, which is located in the underworld of Greek mythology. This dark and gloomy track features some intense blasting and shredding, while the riffs and brutal noises are what we have come to expect from the band since the beginning. “The Stygian Deep” is the second track from the band’s 2015 album, Infernus.

No track displays the intense speed in Derek Roddy’s drumming, much like this track. At times, when I listen to this track, I find the drumming to be so intense that they sound inhuman. “Behold Judas” is the second track from Hate Eternal’s 2005 album, I Monarch, which contains some of the finest songs from the band. The track contains some enjoyable hooks, and the lyrics, though extreme, are quite well written.

The number one song on our list is the title track and the fifth song from the band’s 2005 album. Although not every song in the album is an instant death metal classic, “I Monarch” is quite impressive and is arguably the best track in the album, along with the second track, “Behold Jesus.” The track features some complex instrumentation and spectacular Eric Rutan vocals, which make this track stand out. If you like to listen to some intense death metal, I Monarch ticks all the boxes and ultimately takes the cake in our list of the best Hate Eternal Songs.