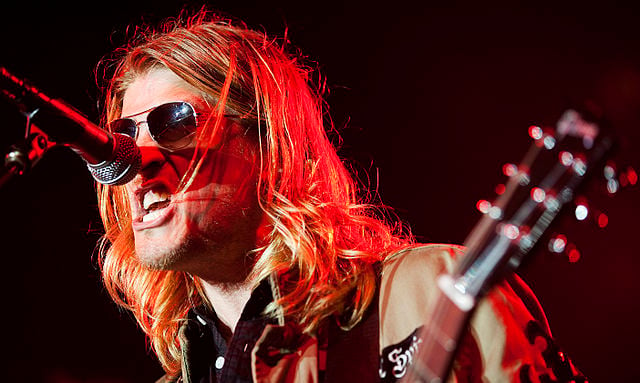 Our Puddle of Mudd songs list looks at an American Alternative Rock Band. Although the band formed in 1991, their first studio album was not released until 2001. Come Clean was their first album, and it was released under the record label, Flawless Records which is owned by the frontman of Limp Bizkit. Lead singer Wes Scantlin and the rest of the band found success within this first record. Although they are primary classified as alternative rock, they do ride the line between alternative and traditional hard rock. This has allowed them to gain fans of both types of music.

Puddle of Mudd has a similar sound to other bands from the same period and some that came before them, such as 3 Doors Down, Hinder, Seether, Fuel, Linkin Park, and Shinedown. Some of their more heavy-hitting sounds can remind people of famous bands like Korn and Rage Against the Machine. Scantlin himself has been compared to Nirvana’s renowned lead singer Kurt Cobain on more than one occasion.

Their first album was widely popular and produced hits like “Blurry,” “She Hates Me,” “Drift and Die,” and “Control.” Although Puddle of Mudd has released other albums after their freshman debut, they only had moderate success compared to their first album. Their first release sold over 5 million copies.

Although they may have never topped the greatness of their first album, it is now 20 years since the release and 30 years since the band formed initially, and they are still touring. Here are the top 10 Puddle of Mudd Songs.

Coming in at 10 on our list of the best Puddle of Mudd songs is “We Don’t Have to Look Back Now.” This son was on their 2007 album Famous and was a radio release. This is an excellent song about moving forward with your life and letting the past go. It is especially loved by those who have been through tough times or who have had toxic people in their lives. This is a song full of nostalgia and hope; the vocals are soft and comforting. But, unfortunately, it is also a song where his vocals sound a lot like Kurt Cobain.

“Stoned” was the second single released from Volume 4: Songs in the Key of Love & Hate. It was also the opening track of this album, setting the tone of this record. The song is about doing things you hate, including working for “the man.” Even musicians have to do things they do not like; this track was a way to express those frustrations. Fun Fact: If you listen to the end of the track – that sound you hear is the lead singer, Wes Scantlin, throwing up from drinking the night before and eating chicken wings in the booth to try to make his hangover better. It did not work.

“Bring me down” was a track on their first album, Come Clean. Sometimes this song gets overlooked as there were so many other great songs on that album. This is another song where Scantlin sounds like Cobain. The entire piece is very reminiscent of the whole grunge era. If you did not know this was from the early 2000s, you could definitely think you are listening to some lost Nirvana track. This is a great song to listen to when you need to vent and get some anger out.

“Out of my Head” was also released on the Come Clean album. This song is about Scantlin’s drug use and how his “friends” all look down on him. He feels like he has nothing income with them, they are judgmental and look down upon him, but he feels stuck with them for whatever reason. At some point, he realizes that these people are really not his friends, but nothing changes. He still talks to them and allows them to judge him.

“Famous” is the title track of the band’s third studio album. The single was released on the radio in May 2007. The song is about wanting to be famous as well as what it is like. Besides being a radio hit, a lot of people remember this song from playing video games. “Famous” was both in WWE Smackdown vs. Raw 2008 as we;; as UFC 2009 Undisputed. In fact, most people actually remember this song more from video games than the radio, but that is a popular way for songs to gain traction and bands to make money now.

This song was on the Famous album. The song was about the singer wondering if he was, in fact, crazy or a psycho. Although this is a much more serious subject in today’s world, when this came out in 2007, it was a hit song. “Psycho” made it to #1 on both the billboard hot modern rock tracks and the Billboard hot mainstream rock tracks. It remained #1 on mainstream rock tracks for 9 weeks. The music video paid homage to various horror movies, including Psycho. I Know What You Did Last Summer, the Texas Chainsaw Massacre, Halloween, and Poltergeist. In fact, the video was actually shot on the Psycho section of the studio tour in Universal Studios Hollywood.

“Drift and Die” was the third song released from the Come Clean album. This single reached #1 on the Billboard Mainstream Rock Charts. The sound of this song sounds a lot like Alice in Chains, which is no surprise to anyone who followed this band before their label debut. Wes used to do many Alice in Chains covers at local shows in and around Kansas City. This song was actually written in the 1990s, not new for this album. So when the song was written, Alice in Chains was at its peak in popularity and a heavy influence on Wes Scantlin.

This is a song that emits loss and unhappiness. That may be why it still remains so popular, as many people turn to it in troubled times.

“She Hates Me” is a catchy song from the opening beat. The song I one of the catchiest songs, and if you listen to it, you are in profound danger of getting it stuck in your head. If you have ever had a bad breakup, this is the song for you.

This song starts out mellow, a guy telling a story of how a relationship, albeit a very short relationship, went bad. As the music continues, it gets a little bit more angry and intense. He starts out realizing this girl hates him, and eventually, he realizes he is okay with her hating him. Did I mention how catchy this song is? Go listen to it. I did. 3 times. If you have not heard it in a while, you will want to hear it over and over again. This is one reason it was so popular – everyone could relate to the subject, and it was written and performed very well.

“Control” is also from the Come Clean album (as most of their best songs are). Suppose it was not for the instant popularity and megahit that “Blurry” was. In that case, this song could have certainly been number one on this list. This song is a little heavier than a lot of their music. It is a song that sounds best loud. Besides the incredible vocals and lyrics – the drums and guitars are especially good in this song.

It is about an intense relationship where both people want to control the other, but neither person can do so. It is a hit that you can still hear on the radio almost 20 years later.

“Blurry” was their second song released off of the Come Clean album (“Control” came first). It was released on October 16, 2001, and it became the most successful rock song in 2002. “Blurry” topped the Billboard Mainstream Rock and the Billboard Modern Rock charts as well as their year-end listings.

This is the song that propelled the band into success. “Blurry” helped them secure these award nominations and wins:

Although “Blurry” is about Scantlin’s love for his son and how much he missed him when he was away, people love this song because it can be entirely relatable for everyone’s life. Although it is about the love between a father and son, people think about anyone they love and miss as they listen to “Blurry” – this can include past relationships, friends, family, and those who have passed.

It is a great song that has withstood the test of time and can still be relevant today.