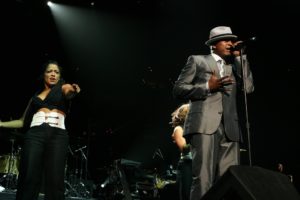 The American rapping artist known as Jadakiss was originally born and raised in Yonkers, New York in 1975 as Jason Phillips. Ever since childhood, Jadakiss developed a keen enough interest in the hip-hop music genre where he began to rap as a freelance artist at just twelve years old. This was a talent he developed after watching street corner rappers do the same. This would ultimately lead him to Puff Daddy and his record label, Bad Boy Entertainment. From 1994 until 2001, Jadakiss and two fellow rappers whom he met while performing in the underground music scene, Sheek Louch and Styles P, performed as The Lox.

Despite the success, The Lox felt the radio-friendly direction promoted by Bad Boy Entertainment didn’t reflect upon the grittier style Jadakiss, Sheek Louch, and Styles P originally started out as. Before becoming The Lox in 1994, they originally called themselves The Warlox. Once 2001 rolled around, Jadakiss opted to embark on a solo career. It proved to be a wise career move on his part as he enjoyed a highly successful run that saw him record and release a multitude of chart-hitting and platinum-certified hits that would earn him recognition by the music industry as one of the best artists performing in the genre of hip-hop and rap. In 2016, The Lox reunited and began to record and tour together again. As Lox, a total of four studio albums, a compilation album, two extended plays (EP), and fifteen singles were recorded and released. As a soloist, Jadakiss has recorded and released six studio albums, six mixtapes, and twelve singles.

Mya’s second studio album, Fear of Flying, was released on April 25, 2000. On it, the single, “The Best of Me,” is performed by Mya and Jadakiss as a duo. The street-savvy single presents a story of a woman’s reluctance to take her relationship further with a man who’d like to take it to a more personal level. Mya’s soft style plays off Jadakiss’ edgier rap style, which added enough appeal to the song to make it a charted hit and in more than just one nation. On the US Billboard Hot R&B/Hip Hop Singles & Tracks chart, The Best of Me peaked at number fourteen, and on the US Billboard Hot 100 at number fifty. On Germany’s GfK Entertainment chart, the song reached number twenty-six, and on the Swiss Hitparade at number sixty-four.

The first single Jadakiss recorded and released was “If You Think I’m Jiggy,” which featured his friends and bandmates, Sheek Louch and Styles P. Together, they performed the song as The Lox as one of the tracks featured on the group’s debut album, Money, Power & Respect, which was released on January 13, 1998. It was the first of the two singles released from the album and it became a charted hit. Not only did it chart on three different US Billboards, but it also served as an introduction to the Recorded Music of New Zealand’s chart at number sixteen.

On April 7, 2009, Jadakiss released his third studio album, The Last Kiss, which produced the charted single, “Who’s Real.” On the US Hot Rap Singles chart, the song peaked at number eighteen, and on the US Hot R&B/Hip-Hop Singles & Tracks chart at number thirty-nine. The song’s popularity sparked interest by the marketing team behind the brand, Gatorade, to install an instrumental version of Who’s Real into one of the product’s commercial runs. In a twist to a classic children’s song, Jadakiss, Swizz Beatz, and OJ da Juiceman challenges the listener if they’re real and they know it, clap their hands. As for the fake people whom they diss, the artists made it quite clear what they thought of them.

“U Make Me Wanna” is a duet performance between Jadakiss and Mariah Carey that comes from his second studio album, Kiss of Death, which was released on June 22, 2004. The power behind Carey’s vocals, combined with Jadakiss’s candidness in his rap-style delivery, adds a thug-a-nomic twist to a synth-heavy track that also features a splash of Egyptian influence. On the US Hot R&B/Hip-Hop Singles & Tracks chart, the song peaked at number eight. On the US Billboard Hot Rap Singles chart, it peaked at number nine. The US Billboard Hot 100 charted U Make Me Wanna at number twenty-one. It also charted in France at number fifty-five.

Together, Anthony Hamilton and Jadakiss perform the single, “Why,” which served as a protest song in 2004 against the controversies revolving around the infamous September 11, 2001 attacks that took down the New York City Twin Towers, as well as a number of terrorist-related actions that claimed over 5,000 lives. Not alone with his opinion, Jadakiss believed the acts of terrorism that were unleashed that fateful day was an inside job, which contradicted the headline news. The song, plus the artists involved, found themselves on the receiving end of criticism by those who were in disagreement. However, both the fans and the people who’ve also raised questions about what really happened sided with Jadakiss and found in him a new hero in what still remains as a fight between two sides of an argument that still refuses to settle even after twenty years since the day it happened.

With the Recording Industry Association of America (RIAA), it also became certified gold. The song appealed to Extreme Championship Wrestling’s pro wrestler, Jazz so much that became her entrance theme during her square-ringed performances.

Originally, New York was supposed to go to Fat Kid Joe, but he turned it down. Jadakiss took interest in it, but Ja Rule grabbed it immediately, beating him to the punch. When he learned who the song was supposed to go to, a decision was made to have all three artists perform the single together. Performed as a subliminal-style jab against a rival rapper, the trio’s slowed-down version of the electrical Nkalakatha by Mandoza seems to add more drama to an already impactful single.

#3 – It’s All About the Benjamins (Remix) (featuring Puff Daddy, Jadakiss, and Sheek Louch)

Puff Daddy’s debut album, No Way Out, was recorded and released on July 22, 1997. Throughout the album, the combined talent of Jadakiss and Sheek Louch, have contributed towards it and the hit single, “It’s All About the Benjamins.” There have been a number of remixes done to the original of this song, but the one that performed best on the charts is the one that featured two members from The Lox recording with their boss at the time, Puff Daddy. It was the number one hit on the US Hot R&B/Hip-Hop Singles & Tracks, as well as on the US Billboard Hot Rap Singles. On the US Billboard Hot 100, it charted at number two.

In 1997, “Honey” was released as a hip-hop remix that served as a defining moment in Mariah Carey’s musical career as her transition into this genre was a step away from the easy listening style she had been previously known for. The combined talent of Carey with Puff Jady, Mase, Jadakiss, and his Lox bandmates received not just the thumbs-up approval by music critics but the fans as well. It was a chart-topper on the US Billboard 100 as well as on the US Billboard Dance Club Songs, and on RPM Canada’s Dance charts.

Around the world, Honey peaked within the top forty of their official music chart lists. The song is on Carey’s sixth studio album, Butterfly. For Jadakiss and The Lox, this served as a breakthrough as they had just signed a record label and had yet to fully establish themselves in the music industry as the hip-hop legends they’ve become today.

#1 – Jenny from the Block (featuring Jennifer Lopez and Styles P)

The collaborated performance between Jadakiss, Styles P, and Jennifer Lopez brought forth the chart-hitting “Jenny from the Block” in 2002. It was featured on the third studio album released by Jennifer Lopez, This Is Me…Then. On the US Billboard Hot 100, the song peaked at number three and on the UK Singles Chart. The mix of Lopez’s R&B vocals with the hip-hop styles coming from Jadakiss and Styles P adds a modernized beat to a song that also features a number of old-school charm as there are samples of music from the 1970s, 1980s, as well as early to mid-20th-century classical music-style material.

Globally, “Jenny from the Block,” charted on most of the official billboard charts, mostly within the top ten rankings. In the nations of Canada and Hungary, the song peaked at number one. With the Australian Recording Industry Association (ARIA) and Norway’s International Federation of the Phonographic Industry (IFPI), the single became platinum-certified. Gold certification was achieved with the Belgian Entertainment Association, France’s National Syndicate of Phonographic Publishing (SNEP), Recording Music of New Zealand (RMNZ), Switzerland’s IFPI, and the British Phonographic Industry (BPI).