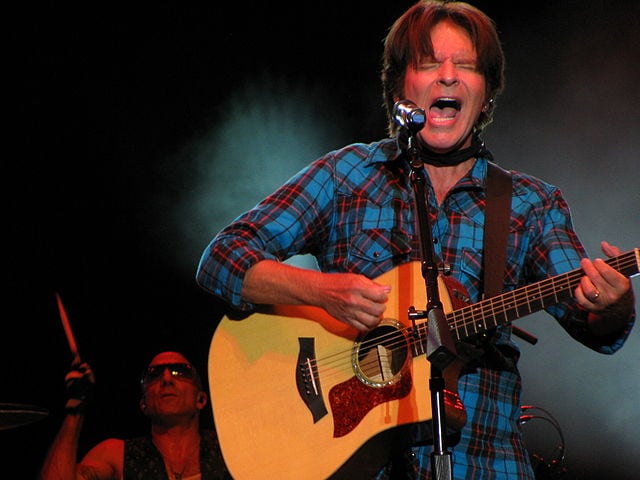 We open up our top 10 John Fogerty songs list with Fogerty’s most recent recording entitled “Weeping In The Promised Land.” If there ever was a voice of rebellion, a voice screaming for justice, an artist not afraid to speak out, it has always been John Fogerty. Taking the lead in the 1960s from Bob Dylan who took it from Woody Guthrie, John Fogerty is an artist who can not just stand around witnessing tragedy without responding to it.

There have not been many artists of recent years who have spoken out against what they believe are political and social injustices for fear of lost sales or retaliation. Even during this horrible pandemic we have heard too much silence from our great artists. Yes, there have been a few like Neil Young, Bruce Springsteen, Sheryl Crow and a handful of others, but in the end it’s the people who have raised their fists. “Weeping In The Promised Land,” is both an observation and a protest against what has happened in 2020. It’s the most emotionally honest song to have been released in this past year. And it was John Fogerty who responded with it.

Continuing with our Top 10 John Fogerty songs list we once again present another song of protest and observance. Released in 2004, John Fogerty’s “Deja Vu (All Over Again),” echoes his masterful work with Creedence Clearwater Revival both musically and lyrically. With a guitar riff cleary and intentionally a play on his “Who’ll Stop The Rain,” masterpiece, John Fogerty questions the Bush Era and the Iraq War in the same way he cried out against the Vietnam War over thirty years earlier.

The first track from the Centerfield album to appear on this top 10 John Fogerty songs list is the fun song “Rock And Roll Girls.” The song was released as the second single from the Centerfield album. “Rock And Roll Girls” was one of those great songs with simple chord changes that garage bands loved to play. Much like many of his earlier Creedence Clearwater Revival songs.

This is one that many people forget about. Some think this was a Creedence Clearwater Revival song. The John Fogerty song “Rocking All Over The World,” was released on John Fogerty’s second solo album simply titled John Fogerty. “Rocking All Over The World,” was placed as the album’s opening track. It was also released as the record’s first single. The song broke the Billboard Top 40 peaking at number 27. The song was covered by the band Status Quo in 1977. It has also found a spot on many live setlists among some of rocks legends including Bruce Springsteen, The Beach Boys and many others who have performed the song in concert.

At number three on our top 10 John Fogerty solo songs list is his classic early 1970s song “Almost Saturday Night.” The song was released on John Fogerty’s 1975 album John Fogerty. It was released as the follow up single to “Rocking All Over The World.”  Many people know this song from the very popular Dave Edmunds version released six years later in 1981.

The next two songs on this John Fogerty list kind of run neck and neck in terms of popularity. Both songs were released on the grand album Centerfield which was released in 1985. The song “Centerfield,” was originally released as the B-Side to the single “Rock and Roll Girls.” However, over time it soon became a much more popular song than the A side. It’s one of those songs that have just become a part of pop culture as its baseball tales were just so universal the song became loved by everyone.

We close out our John Fogerty solo songs list with an amazing recording released in 1985. Listen to the sound of that guitar. That lick is incredibly addicting. The first second fans heard it, they knew John Fogerty had written a new classic. The Old Man Down The Road became a top 10 hit for John Fogerty hitting number ten on the Billboard Hot 100. The song also reached all the way up to number one on the Billboard Mainstream Rock Tracks charts.