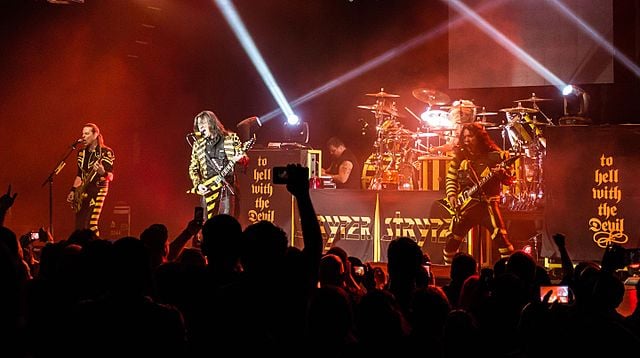 With our top 10 Stryper songs list, we look at a band who are something of a rarity in the Hair Metal genre. Rather than being known for rock n roll excess and debauchery like many of their peers, they are known for their Christian beliefs which are often reflected in their lyrical content.

Their success came along very quickly with their debut album The Yellow and Black Attack being released a year after their formation in 1983. Their main period of success lasted throughout the 1980’s before the grunge era came along and they initially disbanded after ten years together in 1993. Then ten years after that in 2003, they got back together for a reunion tour and they have since remained active, having recorded several more albums and continuing to play live.

Here is a list of  our favorite Stryper songs from over the course of their career.

Kicking off out top ten list of Stryper songs is actually a cover of an old gospel song by Arthur Reid Reynolds that was included on 2013’s No More Hell To Pay which very much gets the point across that Stryper are still committed to their Christian faith thirty years after their formation. The album was very well received both critically and commercially, notably reaching number two on the Billboard Christian album charts.

Up next is a track from Styrper’s most recent album released in 2018. Frontman Michael Sweet produced the record himself and bass duties were handled by John O’Boyle as the actual bassist Perry Richardson was unable to perform due to other commitments. The album was generally successful getting to number two on the Billboard Christian Albums charts. Despite this, the title of the album did cause some controversy with some Christian retailers who refused to stock it.

Next on our top ten Stryper songs list is another cover which most readers here will probably know was originally by Black Sabbath and was the title track of their 1980 album. This cover is taken from Stypers’s covers album released in 2011 titled The Covering which also features covers of songs by other bands that inspired Stryper such as Iron Maiden, Judas Priest and Led Zeppelin. Although one would think that Black Sabbath’s occult lyrical themes would go against Styper’s Christian beliefs, this song is definitely an interesting one for them to cover as the song’s lyrics are not explicitly about religion. According to the song’s original writer Ronnie James Dio they are more about choosing between good and evil in life and the idea that everyone “has heaven and hell inside of them.”

Here is the first single from Styper’s twelfth album released in 2009. This fantastic Stryper recording hit number one on the Christian Rock charts. Fans loved this record because the band titled back towards their original sound. Not many bands tackle cover versions of songs from the band Boston. That group had such a unique sound. The sound of Boston’s guitars and vocals were off the charts especially on the song “Peace Of Mind.” Nonetheless, Stryper does a great job covering this one. Kenny Aronoff played drums on this record and just kills it. The man is so good.

Up next is the title track from what was the band’s comeback album and first of new material since 1990 released in 2005. It was originally going to be a Michael Sweet solo album but ended up being a Stryper record after he played some of the tracks to the other members. The record saw the band adopting a more modern sound with it containing elements of nu metal and being generally heavier overall.

Here is a single taken from Stryper’s fifth album Against the Law released in 1990 which ended up being the final record of their first stint together. The album saw the band going in a somewhat different direction musically, visually, and lyrically. They got rid of their trademark yellow and black spandex outfits and downplayed the Christian themes with the lyrics, instead talking more about relationships and the rock n roll lifestyle, although it did still come from a Christian perspective. Perhaps due to this and the changing musical landscape, the album was not as successful as its predecessors.

At number four on our top 10 Stryper Songs list is the great Stryper song entitled “I Believe In You.” This is a single taken from Stryper fourth album In God We Trust released in 1988. The album sold half a million copies and received gold status. This single reached number eighty-eight on the Billboard Hot 100. The album also received two GMA Dove Awards, one for Best Hard Music Album and the record’s title track won it for Best Hard Rock song.

This emotive power ballad entitled Honestly was released as a single from Stryper’s third album To Hell with the Devil released in 1986. It was their fifth single and the highest Stryper song to chart on the Billboard Hot 100 where it reached number twenty-three. On this chart, it was their only hit to enter the top forty. The album itself was also incredibly successful, selling over one million copies and being the first Christian metal album to achieve platinum status.

Just off the top spot is the title track of Stryper’s second release and what was their first full length studio album, as their debut was a six-track ep. It was the first Christian Metal album to achieve Gold status by selling over half a million copies. This track was released as a single and had a music video to accompany it. The sound here is more classic metal influenced with Iron Maiden being a clear inspiration on the band’s early sound, as opposed to the later more glam-orientated material.

Topping off Stryper songs list is a track from Stryper’s debut release The Yellow and Black Attack. Although it was originally recorded as an ep containing only six tracks, after the success of Soldiers Under Command, it was later re-recorded and released as an actual album with two additional tracks. So, in that sense it was retroactively classed as their debut album.