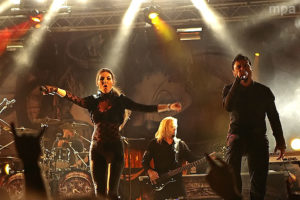 Our top 10 Kamelot songs introduce us to an American band famed for its metal influence. Formed in 1987, the band has attained fame, especially in the power metal music genre. However, the band also has a string of heavy metal, symphonic metal, and progressive metal ballads on its name. Between 1987 and 1991, the band went under the moniker Camelot, a name suggested by guitarist Thomas Youngblood’s mother for her love for J. F. Kennedy. The band would in 1988 record a song “Breaking the Silence” for a cassette-only compilation of several heavy metal bands. “Breaking the Silence” was produced by Keith Collins, aka Thumper, a former Savatage bassist helping the band receive some attention from metal fans.

The band experienced some lineup changes in 1991, having some of the original members leave the band ushering in a new breed of artists. At this time, the band realized a local record store that went under the name Camelot, forcing the members to adopt a new name Kamelot. Later in 1995, the band released its debut album Eternity, with a sophomore album Dominion following up closely in 1997. With singer Mark Vanderbilt unable to tour with his mates in 1998, the band picked former Conception member Roy Khan who served the band from 1998 to 2011 on the lead vocals. However, Roy had to prove himself not by singing but by skydiving with the band! The band went on to release quite some ballads while still undergoing evolution due to lineup changes. A notable lineup change happened when Roy fell seriously ill, having him permanently replaced by Tommy Karevik, who has stuck with the band to date. Here are the top 10 Kamelot songs sampled from the band’s twelve studio albums.

Opening our top 10 Kamelot songs is the ballad “The Great Pandemonium.” The song was written by vocalist Roy Khan and guitarist Thomas Youngblood for the band’s 2010 album Poetry for the Poisoned. Poetry for the Poisoned was the last album Kamelot did with longtime frontman Roy Khan. However, the band was proud to welcome original member bassist Sean Tibbetts who left Kamelot in the early 1990s prior to any album release. The song is quite moving thanks to its sublime vocals, phenomenal drumming, and awe-inspiring guitar solo.

“Phantom Divine (Shadow Empire)” is one of the best Kamelot songs from the band’s album The Shadow Theory. The album is deep-rooted in psychology, in specific Carl Jung’s theory about the dark side that intuitively lies in every soul. “Phantom Divine” opens in a magnificent fashion thanks to the song’s exultant chords. However, its energy subsides fast into a darker mood owing to the lunging guitar riffs and precision pauses. Thanks to Once Human’s Lauren Hart, the song features an enchanting touch not common in most songs. Notably, the song’s video explores human existence as artificial intelligence.

“March of Mephisto” was the first song to ever get a music video. The song was featured in the band’s album The Black Halo, with its lyrics penned by the band members. “March of Mephisto” abjures the double bass featuring a different sound compared to what the band is famed for by its fans. The two voices in this ballad are a representation of Mephisto, with Ray’s clean vocals portraying the disguised Mephisto while Shagrath’s growls epitomize the factual demon behind the angelic disguise.

“Veil of Elysium” is one of the band’s greatest hits from the album Haven, which features themes of death and the afterlife. Elysium refers to a haven where one goes when they shed their mortal coil in Greek mythology. Most of us believe in some kind of afterlife, and while Kamelot’s guitarist Youngblood thinks that even though you die and are gone, there is some hope that you will meet your loved ones or, probably, a pet you treasured much.

Number six on our top 10 Kamelot songs is the ballad “Insomnia” from the band’s album Haven. Guitarist Youngblood revealed that the song’s lyrics allude to life pressures and all that keep everyone up. He continued to say that he sometimes wakes up in the middle of the night to think about a few things or even new ideas, something that can be stressful at times.

“Love You to Death” is one of the band’s favorites from the album Ghost Opera. The phrase “I love you to death” is usually exchanged without much of a true feeling. However, this song brings to our attention a couple that embodies the phrase in the most literal manner. Youngblood revealed that the song’s lyrics allude to teenage lovers who have the lady ail from a terminal ailment having the two vow to treasure and maintain the love into the afterlife. Amanda Somerville does the female vocals in this song filled with beauty and tragedy.

Written by Kamelot band members, the song “Sacrimony (Angel of Afterlife)” is one of the band’s best releases from the album Silverthorn. The album was the first to feature lead vocalist Tommy Karevik who replaced Roy Khan. You can almost hear Youngblood’s daughter singing as the song reaches culmination. The song features Amaranthe’s Elize Ryd and Arch Enemy’s Alissa White-Gluz.

Another great song by the band featured on the album Silverthorn is “My Confession.” While some lead singers leap around the stage or set, Tommy Karevik sings gracefully, remaining methodical in how he acts. In this song, he adds quite some glamour thanks to his theatrical yet non-ridiculous moves. “My Confession” features Eklipse to yield a personification of overflowing glamour.

“Ghost Opera” is the album titled song for the band’s eighth studio album. The song’s lyrics allude to a woman who is haunted by her ambitions of becoming an opera star. Her ambitions have her visualize how the crowd will adore and chant her name. Sadly, this is nothing but just a dream. The song’s video is performed showing an old woman who tries to think about what the past would have offered her. Amanda Somerville offered her vocals on this track, making it a unique and magnificent release.

Number one on our top 10 Kamelot songs list is the ballad “Liar Liar.” The song was released in 2015 on the band’s album Haven, featuring the female vocals of Arch Enemy’s Alissa White-Gluz. Having both Alissa and Tommy sing on the song’s chorus and the bridge is probably the best moment in this song. It’s amazing that Alissa does clean vocals without a single of her famous growls. The song’s performance proves why Kamelot’s fame has lived on while some power metal bands become forgotten with time.