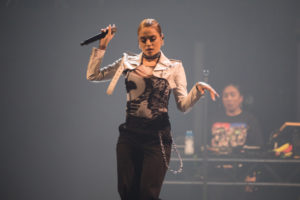 Kehlani Parrish, who is better known among her fans simply as Kehlani, grew up in a family environment that was slightly out of the norm. Instead of being raised by her parents, she was raised by her aunt, whose influence contributed to her interest in taking up dance as a teenager. At first, she aspired to be a dancer, but a knee injury resulted in Kehlani shifting her career goal towards singing. It was during this time frame she’d be recruited to join a local teen band, Poplyfe as their lead vocalist. This wound up paving the way for Kehlani to embark on a musical career that has so far seen her release two studio albums with a third on the way, as well as three mixtapes, and forty-four singles.

Certified gold by the Recording Industry Association of America (RIAA), was 2020’s “Can I” was a single that was released from Kehlani’s second studio album, Was Good Til It Wasn’t. The seductiveness behind Kehlani’s vocals, combined with the soulful lyrical from Tory Lanez, made Can I an R&B favorite, at least enough to reach number twenty on the US Billboard Hot R&B/Hip-Hop Songs chart and at number fifty on the US Billboard Hot 100.

#9 – Get Me (featuring Justin Bieber)

Released in 2020 as a promotional single for Justin Bieber’s fifth studio album, Changes, “Get Me” realized chart success by appearing at number forty-four on the US Billboard Hot R&B/Hip-Hop Songs chart and at number ninety-three on the US Billboard Hot 100. Globally successful as Get Me also reached the charts among some European and Oceania nations, the song peaked at its highest in New Zealand at number four. An electro-pop R&B ballad at its finest, Justin Bieber and Kehlani was described as soft and velvety, at least according to Teen Vogue’s review.

The electro-soul musical genius Calvin Harris is so well known for added drama to Lil Yachty’s rapping talent and Kehlani’s hip-hop, rhythmic style as they performed the single, “Faking It.” The retro-feel of the song came from Harris’s fifth studio album, Funk Wav Bounces Vol. 1, which was released in 2017. It charted as high as number six on the US Dance/Electronic Songs chart and at number twenty-five on the US Billboard Mainstream Top 40. The US Billboard Hot 100 charted Faking It at number ninety-four. The RIAA of USA certified the single at platinum and the Austrian Recording Industry of America (ARIA) certified it gold.

Kehlani’s debut album, SweetSexySavage, was released in 2016. From it, “Crzy” was the first of her singles that would realize chart success. On the US Billboard Hot R&B/Hip-Hop Songs chart, it peaked at number thirty-four, and on the US Billboard Hot 100 at number eighty-five. It also earned a platinum certification by the RIAA and a gold certification by Music Canada. The lyrical tale of Kehlani’s preference not to be underestimated for her passion and talent is heightened by the soulful delivery of her hip-hop/R&B style.

#6 – Done for Me (featuring Charlie Puth)

The duet of “Done for Me” between Charlie Puth and Kehlani brought out the softer side of the songstress as her soulful performance meshed with Puth’s pop influence. This was a track produced from Puth’s second studio album, Voicenores, which was released in 2018. The globally charted song peaked at its highest in Belgium and Denmark at number two, and at number eleven on the US Billboard Adult Top 40 Airplay. On the US Billboard Hot 100, Done for Me charted at number fifty-three. In certifications, the song became platinum in the US and Mexico, gold in Australia, Canada, Italy, and Poland, and silver in the UK.

From the 2016 soundtrack belonging to the film, Suicide Squad, “Gangsta” served as a street-style love song as Kehlani lyrically played out the role as a woman vying for the devoted attention of a gangster she idolizes. With over a million copies of the single sold in the US, it became certified platinum by its RIAA. It also earned silver certification with the UK’s BPI and gold certification from Music Canada. On the US Billboard Hot R&B/Hip-Hop Songs chart, Gangsta peaked at number thirteen while on the US Billboard Hot 100 at number forty-one. In the UK, the song was also popular on its Hip Hop and R&B Singles chart as it climbed to number twelve. The song was most popular in New Zealand as it charted as high as number two.

In 2017, The Fate of the Furious was the eighth movie from the Fast and Furious series starring Vin Diesel. The soundtrack featured the single, “Good Life.” which was performed by Kehlani and G-Eazy. On the US Billboard Hot R&B/Hip-Hop Song chart, it peaked at number twenty-nine. On the US Billboard Hot 100, it charted at number fifty-nine. Globally, it appeared within the top forty of many European charts, as well as on Australia’s official music chart at number twenty-seven, and on New Zealand’s recorded music chart at number twenty-one. Beautifully performed with an upbeat delivery by Kehalni, then added with the rap talent of G-Eazy, made Good Life one of those fun songs that are too irresistible to pass up.

“Playinwitme” was a single performed by Kehlani and Kyle that was digitally released on March 15, 2018. It came from Kyle’s debut studio album, Light of Mine, and was a number eleven hit on the US Billboard Rhythmic chart, as well as on Belgium’s Ultratop music chart. The commercial sales of the single actually outperformed the Billboard charts as it became certified Platinum by ARIA and the RIAA. Gold certification from New Zealand’s BPI and silver certification from the UK’s BPI are also to Playinwitme’s credit.

Released in January 2019, “Nights Like This” was a single that featured an expression from Kehlani as a protagonist dealing with the heartache of a failed relationship. Ty Dolla Sign’s rap performance from a man’s perspective served as a bit of soul to an already heartfelt song. On the US Billboard Hot R&B/Hip-Hop Songs chart, it peaked at number thirty-one. Nights Like This appeared within the top forty among a number of official billboard lists globally, namely the nations of Belgium, Ireland, Lithuania, New Zealand, and the UK. In the US, the song became double platinum while in the UK it has become certified silver.

From her debut studio album, Invasion of Privacy, Cardi B teamed up with Kehlani to bring forth the hit single, “Ring,” in 2018. This smoothly performed R&B track featured the songstresses expressing modern-day vulnerabilities with vocal performances that brought about an adult contemporary sound. In 2019 and 2020, Ring won the winning song award from the American Society of Composers, Authors, and Publishers (ASCAP), once each year. Also in 2020, it was also recognized as a winning song by Broadcast Music Inc. (BMI). On the US Billboard Hot R&B/Hip-Hop Songs chart, Ring peaked at number eleven and charted at number twenty-eight on the US Billboard Hot 100. In the US, the single became certified platinum twice over and in Canada, it was certified gold.