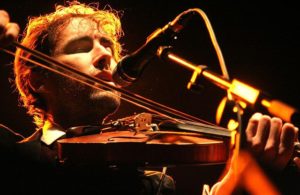 Our top 10 Andrew Bird songs list presents the music of an artist who is one of the best-multi-talented figures in the indie rock scene. Born in 1973, Andrew Bird has perfected his skills in songwriting, singing, and playing several instruments, including the guitar, glockenspiel, and violin. However, the violin seems to be his most preferred instrument having him take on violin lessons in the Suzuki method since age four. Andrew Bird is also an alumnus of Northwestern University, where he graduated with a degree in violin performance.

After he graduated in 1996, Andrew Bird released his solo album Music of Hair. This self-released album saw this multi-talented brilliant artist exhibit to the world how much of a promising artist he was. The violin was featured prominently on the album. Blues, jazz, and folk-rock hugely influenced songs on Music of Hair (1996). Andrew Bird gained some attention, seeing him collaborate with the swing and jazz act Squirrel Nut Zippers.

He soon appreciated the notion of having his band where he would become the lead singer. Following this, Andrew Bird’s Bowl of Fire was born, and within a few months, the band released its debut album Thrill (1997). Again, his violin skills were featured prominently on the band’s music. The band released two more albums, Oh! The Grandeur (1999) and The Swimming Hour (2001). However, Andrew Bird’s Bowl of Fire failed to reach its desired fame. The band performed for less than a hundred people at times.

Andrew Bird would stick with his musical dream nevertheless and went on to perform as an opening act for a Chicago-based band alone under his band’s name. The move was after the rest of the members failed to turn up. Amazingly, he impressed the audience with his skills. Andrew Bird embarked on a solo music career with the release of his album Weather Systems (2003). While the album was initially released on Grimsey Records, Andrew signed a deal with Righteous Babe Records, which is owned by singer Ani DiFranco, where he re-released his debut album. Most of Andrew Bird’s work reflected his love for the indie-folk music style. Andrew Bird spices his music with whistling in his songs while still using his traditional violin.

Andrew Bird would later sign a recording contract with Fat Possum Records, where he released his studio album Armchair Apocrypha (2007). Since then, Andrew has become a common face in the indie rock scene. To date, he has released more than fifteen albums while collaborating with artists such as Preservation Hall Jazz band and Fiona Apple. Andrew Bird was influenced by jazz and classical acts, including Fats Waller, Claude Debussy, Lester Young, Béla Bartók, John Hodges, and Maurice Ravel.

Ushering us to the top 10 Andrew Bird songs is the upbeat ballad “Give It Away.” The song is featured on the album Break It Yourself (2012). Andrew Bird revealed in an interview that he penned the lyrics to this song after attending a show in Belgium that left him in desolation. The song finds Andrew posing a philosophical and contemplative question about the objectification of love and affection.

Specifically, it inquires whether a singer giving his or her all at a live performance can replicate the same love for his or her loved ones back when they get home. Other artists to release a song under the same title (but different lyrics) include George Strait and Red Hot Chili Peppers.

“Oh No” is one of the critically acclaimed hits on Andrew Bird’s album Noble Beast (2009). The singer-songwriter reveals that the song was inspired by the words “Oh No!” which were said by a boy who kept mentioning these words in a flight. Unlike the boy, most of us barely show our true feelings about what is happening around us. Andrew knows that most human beings can barely express themselves in the young boy’s manner. However, he fights against concealing our emotions which he finds hypocritical and somewhat sociopathic.

Are You Serious (2016) features some of the best Andrew Bird songs of all time, including “Roma Fade.” The singer revealed in an interview that the song alludes to a nonverbal conversation between two souls that strikes the thin line between eeriness and love. “Roma Fade” is a little fast-paced rock ballad delivered on Andrew Bird’s violin lines and clumping drums.

“Bloodless” is a timely political ballad from his Grammy Award-nominated album My Finest Work Yet (2019). The song is inspired by the 2016 US elections, which to Andrew compares to Catalonia in the early twentieth century. This is meant to show how the US is in a cold civil war which almost everyone is playing a part in knowingly and unknowingly. As a result, a few individuals have been reaping wealth and political power from this. The song’s imperceptibly funky vibe makes it quite a hit.

Number six on our top 10 Andrew Bird songs is the hit “Three White Horses.” The song is featured as the opening track to Andrew Bird’s album Hand of Glory (2012). In the Bible, it is mentioned that Jesus Christ will appear riding a white horse while death rides a pale one. The song acknowledges that human beings like to spend their last moments of life with the ones they love most. Other songs that have paid homage to the white horses’ mythology include “Six White Horses” by Tommy Cash and “See That My Grave’s Kept Clean” by Blind Lemon Jefferson.

Andrew Bird stamped his position in the indie-folk scene with his album My Finest Work Yet. One of the musical gems from the album is “Manifest.” The song finds Andrew Bird tracing the evolution of human beings from a single celled organism. Later in the song, he pays homage to how animals and plants become fossil fuels. As a result, he views nature as a ghost that powers the whole universe.

Let’s go back to ancient Greek life, where we find the mythology of King Sisyphus. The king is said to have received the ultimate penalty in his life. This was pushing a rock up the mountain only to have it crush him each time he reached the top. Andrew Bird tries to mimic the mythology, but instead of pushing a rock-like King Sisyphus, he wears a huge stone head to replicate the king’s situation. His whistling adds glamour to the melodic nature of this hit.

Armchair Apocrypha (2007) might not have been as popular as other albums, but it featured some of the best Andrew Bird songs, including “Imitosis.” The song alludes to understanding our meanness, loneliness, and seclusion. “Imitosis” has its tune almost similar to the famous song “Smooth” by Santana featuring Rob Thomas.

“Left Hand Kisses” is a duet by Andrew Bird and Fiona Apple featured on the album Are You Serious (2016). The song finds Andrew trying to pen a love song. Initially, the song’s inception was an internal conversation that started with Andrew Bird’s voice. However, with another voice appearing in his internal conversation, Andrew knew that he needed to find an artist to make a duet with, ending up choosing Fiona Apple. The song isn’t a simple love song as one might have imagined. Andrew’s reason for the song’s complicated nature was that the human race is complex.

Number one on our top 10 Andrew Bird songs list is the hit “Pulaski at Night.” The song is featured on the EP I Want to See Pulaski at Night. “Pulaski at Night” features a simple yet dynamic vibe that make it quite a nice song to vibe with. The song’s lyrics allude to Andrew Bird’s all-pervading narrative of loss, rebirth, and love. Andrew delivers the song in a rhythmic violin tune backing it up with melodic vocals.