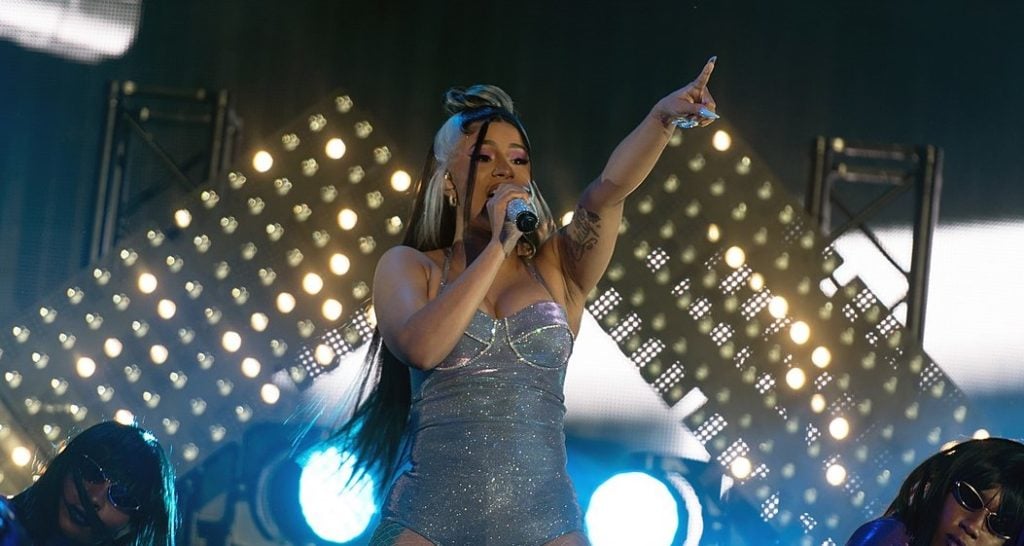 Our Top 10 Cardi B Songs looks at the songs of an artist born Belcalis Marlenis Almanzar, on October 11, 1992, is an American Rapper and a songwriter. She was born and grew up in The Bronx. Cardi B first drew attention for discussing her hustle or rather career as a stripper on social media. She became a celebrity through her Instagram account.

From 2015 to 2017 Cardi B showed up as a cast member on the VH1 reality TV series Love and Hip Hop. Cardi signed her first major label record in February 2017 with Atlantic Records. Her first debut single with Atlantic Records was titled “Bodak Yellow” and attained number one with the US Billboard Hot 100 chart. That was an amazing record since she became the second-ever female rapper to achieve this with a solo output after Lauryn Hill in 1998.

In 2013, Cardi B started to gain popularity due to her videos going viral on her Instagram page and social media. In November 2015, she made her music debut on Shaggy’s remix “Boom Boom” alongside Popcaan – Jamaican dancehall singer. Her first music video debut was “Cheap Ass Weave” and her first full-length project was titled Gangsta Bi**h Music Volume 1 in 2016.

Below are the top 10 Cardi B songs according to our opinion, but this may vary according to personal interests.

At number ten is the “Lick” song which is interesting to listen to. The Hip Hop, newest couple made their debut from this song “Lick” from their second album released on January 20, 2017. This video is set in a casino that is oozing with old-school glamor. Cardi B and her partner are finding themselves in a Bonnie and Clyde style heist just like Beyoncé and JAY-Z. These partners in crime furs and don diamonds make intense eyes at each other. The song is very interesting and received much applause from the fans.

Next on the top ten songs by Cardi B is “I Do.” This song featuring SZA is packed to the brim due to its provocative one-liners with features from the music’s heaviest hitters. No song brings as much ruthlessness as “I Do.” This is a swaggering duet featuring SZA about leaving gents or rather men reading on. ” I Do What I like, I do I do,” SZA raps these words freely, and a good reason why their pairing had a great impact.

Again, this collabo sounds great together when they are passing the ball back and forth and you would think they have done it a couple of hundreds of times. Typically, they hold strongly according to their distinct positions. For these two artists who understand what it feels like to be a woman, their words are lively.

Cardi B recorded this song for her debut studio album the ” Invasion of Privacy” in 2018. It contains interpretations from nightmares and dreams written by Maurice Jordan, Meek Mill, and Jermaine Preyan, thus they are recognized among the composers. She gave the first live performance on this song in 2018 at the BET Hip Hop Awards.

In this music, Cardi B kicks things off by being extremely hard when she is telling the entire tale of her rise without filtering out any experience she had in her course. All this narrative is behind an aggressive beat full of energy. The best thing is that she refuses to be shameful of her past, like being a stripper, and she says it was not an easy way to walk along. In the end, Cardi wins since she did it by being her true self.

This song turned heads immediately after it was released. Here, the Bronx native reintroduced herself to her stunning and growing fanbase as well as her critics who had written her off as a contrivance. Cardi B conveys hard bar after bar turgidly bashing her way via the AraabMuzik beat. You will definitely like this track. It might not be her best, but the song represents a crucial turning point in her career. If you are a lover of hip hop music, after listening to this, you will agree that Cardi can actually rap.

“This song was originally released in 2016 and became the opener to Cardi B’s newest mixtape Music Volume 2. On this hard track, she flexes her independence come up while making it clear to everyone that she is a force to be reckoned with. Due to this, her labels are interested in her and she is held out for a multimillion-dollar deal from the Atlantic. This Bronx rapper represents where she is from by making her “New Yawk” accent known or rather heard loud and clear. This song is filled with outstanding one-liners.

At number five in our list is “Bartier Cardi.” In this song, Cardi B follows up her lovable surprise smash, the “Bodak Yellow,” but it is more audacious. “Bartier Cardi” featuring 21 Savage, has made an incredible collabo. The song is built on momentum and is a promise of its predecessor, that is, with similarly controlled aggression as well as unflappable slick talk.

Cardi B’s words crack and wallop thus imposing her will. Amazingly, she settles comfortably into luxury laps and every stride she makes is an emphatic one. This song feels like a celebration of Cardi’s stunning rise. Her lyrics “Cardi got rich, they upset, yeah,” demonstrates swagger and is one of her Instagram jeers signatures. She has a distinct presence and when next to the inexpressive 21 Savage, she is livelier.

If you know Cardi B well, you will agree that she is not the kind to avoid the monster or rather the elephant in the room. Whether the issue involves racism or a comment from her haters, that has crossed the boundaries, she will not mince words. This hit “Be Careful” is not an exception and aims at her lover. She raps like a fed-up woman firing a warning shot to get lost or get it together.

This is a single that shows the album will further show one of the music’s most accessible stars. For the fans who are ready for the stomp-somebody- out the floor, this star has chosen refinement. Cardi B has demonstrated her Latina roots and her accent is more apparent than ever. Though this song has been rapped in shiny new packaging, her underlying qualities that the fans love are still there. This song will motivate most ladies to demand their worth and be recognized.

Cardi B delivered this stunning anthem in October and it stood at number 8 on the Billboard Hot 100. This hit earned her the 20th song to appear on the top 10 list. “Let us get this money, honey!” The song is built around a bass-heavy, pounding beat making the track fun. The song is not as animated as “Bodak” and neither is its transcendently brazen as “Money Bag,” but then, it cuts harder.

She remains a direct and ungenerous writer who pairs ideas to their essence. In the entire song, the true treat is in the final part where she raps fantastic lines. She remains a titan flexing and similarly has made it clear that money is not the motive, but it is just the means.

This song precisely shows that Cardi hates the press. Her hate for the press escalated since gossip blogs pressed to cover her relationship drama with her husband last year. Since then, she has not been shy about expressing acridity for thirsty journalists. In her verse in the recent song “Clout”, she says, or rather raps ” I should run a whole blog at this rate/ They using my name for clickbait.” Cardi B does not always use a foul mouth unless she wants to back up her threats.

In this new single ” Press,” she wages a complete war with journalists, bloggers, and anyone who will stand in her way. It seems Cardi B was chanting out warning on previous singles “Money” and “Bartier Cardi” and she has taken full aim on journalists and press haters on “Press.” She starts from menacing warnings to goofier praise about sexual prowess and her money. Cardi has always been on intimidation mode, but on this hit “Press” she sharpened her skills or rather rapping abilities to elevated levels with deadly effect.

This song tops on our list of the ten best Cardi B songs. It is an amazing hit by the BX native and is filled with Quotables. “Up” is among the more opulent tracks by Cardi B. The song has a catchy main refrain combined with unsurprisingly funny, interesting, and confident lyrics making it another gem that is worth all the praise.

The song begins with Cardi B portraying herself as a “grieving widow” who is stamping her Louboutins on a unique statue’s chest- “RIP 2020”,- then dancing in a cheerleader-like formation and seductively swapping tongues with other hot women. For this song, Cardi wanted to go back to the original inspiration that is behind her debut mixtape Chicago drill and “gangster violence” unlike WAP, which is full of nudity. “Up” has a very catchy main refrain and it is not a sexual innuendo; instead, it is about the unsettled beef. With this song, Cardi has showcased that she has an unmatched talent for creating quotable viral one-liners.

Cardi B is an incredible rapper and Hip Hop artist. She has risen to fame within a short span due to her unmatched lines and natural flow. The above are the top songs by Cardi that will inspire you to listen occasionally.