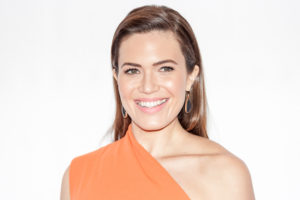 The multi-talented Mandy Moore was born in Nashua, New Hampshire, in 1984 but was raised in Longwood, Florida when her family moved there while she was still an infant. While growing up, even as a child, Mandy already developed a strong interest in acting and singing. She credits this to her grandmother, who was a professional ballerina in London, England. Despite her parents assuming Mandy was just going through a phase, they still supported her when she took lessons in acting and singing. This resulted in Mandy performing the American National Anthem at a number of events held in the city of Orlando, as well as appearing in a number of productions in her local area, which included nearby Orlando.

Mandy Moore was only thirteen years old when Epic Records first learned of her talent. By 1999, after signing with the label, she released her debut album, So Real, which featured her debut single, “Candy.” This successful debut paved the way for Moore to earn a spotlight at a global level, mostly in the pop-rock genre of music. In the nation of Australia, the name of Mandy Moore has become among their favorites as her popularity there as a singer had become more obvious over a course of time than it had been in the US. So far, Moore had recorded and released seven studio albums, three compilation albums, eighteen soundtrack albums, and two video albums. In total, she has nineteen singles, along with several songs that have been featured in a variety of movies and television productions. This discographic resume, combined with her acting career, has made Mandy Moore one of the most prolific entertainers in the entertainment industry. She is somewhat of an outlier in the female pop star category as she doesn’t sound anything like a Britney Spears or a Carmela Cabello and she is definitely not an Alanis Morissette of Avril Lavigne. She is somewhere in the middle which seems to  suit here loyal fans just fine.

Wild Hope is the fifth studio album Mandy Moore would record. Released in 2007, “Extraordinary” peaked at number two on the US Billboard Bubbling Under Hot 100 Singles chart. The combined usage of drums, guitar, and violin gave this song an instrumentally organic feel, which is a sharp contrast to the bubblegum pop style Moore originally started her professional music career with. The maturity of Moore really shines through this soft, yet cheerful performance.

Originally written and performed in 1987 by John Hiatt, “Have a Little Faith in Me” is a song covered by Mandy Moore that was included in her fourth studio album, Coverage. The sound of church-style bells chiming at the start of the song served as a heartwarming glide into a spiritually moving musical experience. Moore admitted it has always been one of her favorite songs while growing up. Have a Little Faith in Me charted on the US Billboard Mainstream Top 40 at number thirty-nine as it appealed to the fans who seemed to share Moore’s appreciation of the song.

Mandy Moore’s debut album, So Real, featured the track, “Walk Me Home,” which peaked on the US Billboard Mainstream Top 40 at number thirty-eight. The romantic delivery performed by Moore caters to the bubblegum pop genre, but with a moderately softer touch. The start of the song has a soulful feel, delivering the song from start to finish a soothingly slow and sensual performance.

Coming from Moore’s third studio album, Mandy Moore, “Crush” became popular enough on Australia’s ARIA chart to peak at number twenty-five. On the US Billboard Mainstream Top 40, the song peaked at number thirty-five. The easy listening performance of Mandy’s vocals is soft and playful at the same time, making it easy to get caught up in the melodic flow of the song from start to finish.

“So Real” is the lead single from the 1999 debut album of the same name. While this song didn’t appear on any of the US Billboard charts, it peaked at number eighteen on New Zealand’s Recorded Music chart and at number twenty-one on Australia’s ARIA chart. The song has a strong, lovestruck R&B feel to it and a somewhat softer bubblegum pop-rock approach.

One of the tracks from the Tangled: Original Soundtrack is “When Will My Life Begin?” which is performed by Mandy Moore as she played the Rapunzel character of the 2010 film. The song feels fast and youthful, but at the same time has an old-world feel to it through its music play. The vocals of an eager young woman who is equally afraid really bring forth a spiritually-sparked song. The British Phonographic Industry issued the song Gold certification for having over 400,000 copies sold.

“In My Pocket” comes from Mandy Moore’s third studio album, Mandy Moore, which was recorded and released on June 19, 2001. The song charted as high as number two on the US Billboard Under Hot 100 Singles and at number twenty-one on the US Billboard Mainstream Top 40. In Australia, the ARIA chart peaked In My Pocket at number eleven, and it became certified Gold for having over 35,000 copies of the song sold. Moore’s performance of the song was considerably more mature than the bubblegum pop-rock style she started out with. It’s still pop-rock, but with a naughtier flare.

The second studio album coming from Mandy Moore was released on May 9, 2000, which is five months after the release of her debut album. I Wanna Be With You has since become certified Gold with the RIAA. The single of the same name earned Mandy Moore a win for Song of the Year with the 2001 Radio Disney Music Awards. On the US Billboard Mainstream Top 40 chart, the song peaked at number eleven. On the US Billboard Hot 100, it peaked at number twenty-one. The song also earned chart success globally, as it placed as high as thirteenth on Australia’s ARIA chart, and appeared within the top forty among most charts throughout Europe and in Canada. The mix of heavy stringed instruments, along with influences of pop and R&B has the soundtrack version less poppy than the one that was played in the 2000 movie, Center Stage.

The debut single, “Candy,” comes from Mandy Moore’s debut album, So Real. The album was released on December 7, 1999, almost four months after her first song first hit the music charts. The song charted worldwide where it peaked as high as number six on Australia’s ARIA and as high as number six on the UK’s Official Singles Chart. On the US Billboard Hot 100, Candy charted at number forty-one, while on the US Billboard Mainstream Top 40 at number twenty-seven. Candy plays itself out as an innocent escape only a bubblegum pop-rock song can pull off. In sales, Candy became certified Platinum by the Australian Recording Industry Association, as well as certified Gold with the Recording Industry Association of America.

“I See the Light” won Best Song Written for Visual Media with the Grammy Awards in 2012 for the motion picture 2010, Tangled. The combination of classical, folk, and soft pop to this dreamy, romantic ballad brought out the best of Mandy Moore and Zachary Levi in their duet performance. Instead of coming across as a pair of singers doing a love song, the cheerfulness associated with the vocals was enough to potentially cause a listener to believe the song really has been sung by a duo who are falling in love with each other. The fan appeal of the song was so great that it earned RIAA’s Platinum certification and BPI’s Silver certification.

Top 10 Mandy Classicrockhistory.com claims ownership of all its original content and Intellectual property under United States Copyright laws and those of all other foreign countries. No one person, business or any organizations is allowed to re-publish any of our original content anywhere on the web or in print without our permission. All photos used are either public domain creative commons photos or licensed officially from Shutterstock under license with ClassicRockHistory.com. All photo credits have been placed at end of article.