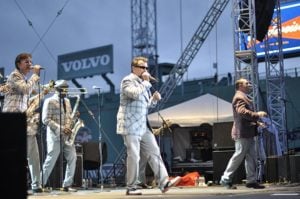 While the band made music and toured different places for live performances, they had to wait till the 1990s to achieve mainstream success following songs that gained critical acclaim. Mainstream exposure had the band gain more popularity, and by 1997, The Mighty Mighty Bosstones was releasing big hit songs which the music world reckoned. While the band has undergone a hiatus and lineup change, bassist Joe Gittleman, singer Dicky Barrett, saxophonist Tim Burton, and dancer Ben Carr have remained since the band’s inception. Here are the top 10 The Mighty Mighty Bosstones songs that stand out from their eleven studio albums.

Featured on their 2021 album, When God Was Great, “The Final Parade” is an eight-minute song that marks the band’s signing to Hellcat Records. “The Final Parade” is about the high and low moments in the band’s journey and the history of the ska music genre. The song’s featured vocals, cameos, and guest appearances from ska-punk celebrities make the song stand out. The Mighty Mighty Bosstones’ singer Dicky Barrett would reveal in an interview that the song was released as a love letter to the ska music genre and fans.

“Kinder Words” is one of the few songs that stand out from the band’s 1994 album Question the Answers. While the album lacked some elements that put other records ahead, this song fought for its place, being the most memorable song in the 1994 discography. Dicky Barrett pulls off some hard to imitates vocals for this song. Additionally, you can’t help but love how the sax and guitar domineer in this song’s instrumental yielding quite a unique and catchy tune.

The Mighty Mighty Bosstones tried to match, if not surpass, the energy that the Kiss band showcased on the original version of the song “Detroit Rock City.” Written by Paul Stanley and Robert A. Ezrin for the Kiss album Destroyer, “Detroit Rock City,” is a tribute to the music scene in Detroit city. While Detroit was the motor city in the early twentieth century, the town turned slowly into a rock city where rock stars would be born or rather emerge. The Mighty Mighty Bosstones did a cover of this song on 1994’s Kiss My A**: Classic Kiss Regrooved, an assortment of Kiss songs covered by different musicians.

“Simmer Down” is a cover by The Mighty Mighty Bosstones, a 1964 number-one hit song in Jamaica. Initially, the song was released by The Wailers featuring The Skatalites, an iconic ska supergroup. At its release, “Simmer Down” was directed to ghetto rude boys to cool down with crime and violence. The Mighty Mighty Bosstones would cover the song featuring it in their EP Ska-Core, the Devil, and More.

“The Rascal King” was one of the reputable songs in The Mighty Mighty Bosstones’ most successful album, Let’s Face It. Like many bands of their time, The Mighty Mighty Bosstones would have some inspiration from their political environment. In this context, “The Rascal King” would be inspired by James Michael Curley, a former Mayor for Boston who later became the Governor of Massachusetts.

Featured on their 2000 album, Pay Attention, “So Sad to Say” is a sad song that The Mighty Mighty Bosstones uses to express feelings about unrequited love. Broken hearts can utter quite some emotions, and in this song, you can’t help but notice the bitterness of a guy who treated a woman right only to have his heartbroken. However, the heartbroken guy seems a little naïve to say that she will get what’s coming to her, in this context, a bad guy. Nevertheless, he is quite right in saying that he will never be the same even if they get back together.

The Mighty Mighty Bosstones receive critical acclaim with their major-label debut on Mercury Records, Don’t Know How to Party. Featured on this album, “Someday I Suppose” was the fans’ favorite owing to its catchy instrumental. The song peaked at number 19 on the Billboard Modern Rock Tracks Chart, helping the album enter the Billboard 200, peaking at number 187.

#1- The Impression I Get

“The Impression I Get” is the best song from ska-punk stars and highlights their career. The opening question in the lyrics signifies from the beginning that the song is about the inevitability of tragedy from the perspective of a person who has barely experienced it. Lead vocalist Dicky Barrett would come up with the song’s lyrics after attending a brother’s funeral to one of his friends. Barrett counted his blessings while still wandering the impulse he would give when faced with a devastating life-changing experience. The song would become a number one hit on the Billboard Modern Rock Tracks chart boosting the album sales and opening doors of commercial success to The Mighty Mighty Bosstones.