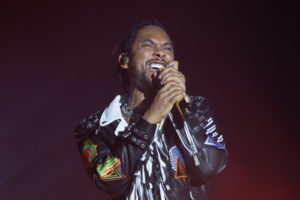 Born and raised Californian Miguel Pimentel grew up under the influence of old-style R&B music by his mother, as well as the musical genres of classic rock, funk, hip-hop, and jazz his father enjoyed. As a singer-songwriter, he incorporated these sounds into his brand of musical production once he got into the entertainment industry himself. In addition to his music, Miguel is also noted for his acting and record production work as well. From the age of fifteen, Miguel learned his way around the recording studio and has taken part in the production of releasing recorded work for other performing artists. In 2010, he began to record and release his own music. So far, he has four studio albums and seven extended plays (EPs) to his credit. He also has four mixtapes and twenty-one singles.

Ambition was Wale’s second studio album, which was released in 2011. He and Miguel combined their styles to perform “Lotus Flower Bomb,” which became a number one hit on the US Billboard Hot R&B/Hip-Hop Songs chart and climbed to number thirty-eight on the US Billboard Hot 100. Wale’s hip-hop delivery is beautifully smoothed out by Miguel’s lyrical magic that makes Lotus Flower Bomb blossom as an easy-listening soul-fused experience.

Cole’s second studio album, Born Sinner, was released in 2013, and “Power Trip” was its melancholic lead single. In a somewhat softer rap performance than Cole’s previous work, the smooth, rhythmic addition of Miguel’s vocals adds a hint more soul into a song of a protagonist trying to contend with his crush on a love interest that had him entertaining unethical thoughts. On the US Billboard Hot R&B/Hip-Hop Songs chart, Power Trip surged to number five. On the UK Hip Hop and R&B Singles Chart, it peaked as high as number nine. The US Billboard Hot 100 charted the song at number nineteen.

#7 – How Many Drinks? (featuring Kendrick Lamar)

From Miguel’s second studio album, Kaleidoscope, “How Many Drinks?” served itself up to be a soulful, sultry chart success as high as number twenty-four on the US Billboard R&B/Hip-Hop Songs chart and at nineteen on the US Billboard Adult R&B Songs chart. On the US Billboard Hot 100, it charted at number sixty-nine. It also received a nomination in 2014 from the Grammy Awards for Best R&B Performance, but it lost out to Something by Snarky Puppy and Lalah Hathaway. Within the RIAA certified platinum single, there are traces of sampled music from The Carpenters’ classic single, We’ve Only Just Begun.

Miguel’s third studio album, Wildheart, was released in 2015, and “Coffee” was the top hit that came from that album. The critical acclaim both artists received for the refreshing R&B performance brought forth by Miguel and Wale is also reflected in the commercial sales as it became certified platinum by the RIAA and certified gold by Music Canada. On the music charts, it climbed to number twenty-eight on the US Billboard Hot R&B/Hip-Hop Songs chart. On the US Billboard Hot 100, it appeared at number seventy-eight. The breeziness of style that flowed between Miguel’s soft and soulful lyrical talent and Wale’s smooth hip-hop delivery makes Coffee as an ideal song to wake up to and enjoy.

In 2013, Mariah Carey releases her fourteenth studio album, Me. I Am Mariah… The Elusive Chanteuse. From it, the guitar-twanging opening, along with Miguel’s rhythmic verse, smoothly paved the way for the power behind Mariah Carey’s soulful voice to make “Beautiful” a chart-hitting success. On the US Billboard Hot R&B/Hip-Hop Songs chart, it peaked at number three. Around the world, Beautiful charted within the top twenty among several nations, namely Australia, Denmark, Japan, Netherlands, New Zealand, South Africa, South Korea, Sweden, and the UK. On the US Billboard Hot 100, it also peaked at number fifteen. With the RIAA, Beautiful was certified platinum twice. In Australia, it earned a platinum certification while with Denmark and New Zealand it was gold. In the UK, the BPI certified the single at silver.

On the US Billboard Hot R&B/Hip-Hop Songs chart, “Sure Thing” peaked at number one. It was the first number one hit for Miguel and the second out of four charted hits that came from his debut album, All I Want Is You, which was released in 2010. The playful and seductively smooth R&B song showcased the vocal range of Miguel’s lyrical talent, which seemed to serve as a sign of things to come at the time. It also became triple platinum certified by the RIAA.

From Kygo’s second studio album, Kids in Love, he and Miguel combine their vocal talent for the single, “Remind Me to Forget.” This playoff between the two artists offered a summer-style dance number competed well enough on the music charts to peak within the top forty among most of the global billboard charts, and even as high as number one with the Czech Republic’s Top 100 chart and on the US Billboard Dance Club Songs chart. On the US Billboard Hot 100, Remind Me to Forget peaked at number sixty-three. In Canada, the single became certified platinum four times and in Australia, twice. In France, it was also certified platinum.

Miguel’s laid back vibe of 2017’s “Sky Walker,” combined with the perky-rap performance of Travis Scott, contributed to the summertime-feel of a single that climbed its way up to number fourteen on the US Billboard Hot R&B/Hip-Hop Songs chart and at number twenty-nine on the US Billboard Hot 100. It also became certified platinum by the RIAA three times, as well as by Music Canada twice. Sky Walker comes from Miguel’s fourth studio album, War & Leisure.

From Miguel’s second studio album, Kaleidoscope Dream, “Adorn” became his first and most successful single he’s ever released. The song peaked at the top of the US Billboard Hot R&B/Hip-Hop Songs chart, as well as the US Billboard Adult R&B Songs chart during the year of its release in 2012. On the US Billboard Hot 100, it climbed up to number seventeen. The heavy synth, combined with the brazen-style performance of Adorn, was also the first single to officially chart among the billboards of other nations, as it reached as high as number six on the UK Hip Hop and R&B Singles Chart and at number seven in Belgium’s Ultratop chart. In addition to the global recognition, Miguel and his single received a Grammy Award in 2013 for Best R&B Song. It also became triple-platinum certified by the RIAA, as well as single platinum in Australia, and gold in the UK.