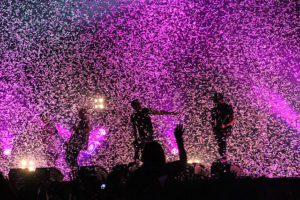 Our top 10 Parkway Drive songs list presents ten of the best songs released by an Australian Metalcore band first formed in the early 2000s. The band got its start in 2003 with its name inspired by the street where the members practiced and rehearsed. At the time of the band’s inception, there were few places that a band such as Parkway Drive, punk rock and hardcore punk bands would practice. Eventually, their home rehearsal space became the band’s little oasis from its career would begin. Parkway Drive’s first show was at the Byron Bay Youth Center, where the band impressed many, including Michael Crafter of I Killed the Prom Queen.

Michael Crafter gained interest in the band’s music style, pursuing Parkway Drive for a collaborative EP. Both bands collaborated for the I Killed the Prom Queen/Parkway Drive: Split CD EP release in 2003. Parkway Drive later signed a recording contract with Resist Records, where the band recorded and released the EP Don’t Close Your Eyes in 2004. After the EP release, the band went on tour as a support band opening for Hatebreed, Shadows Fall, Alexisonfire, and Chimaira. Original bassist Bret Versteeg left the band having his position filled by Shaun Cash.

Parkway Drive traveled to the US, where the band recorded its debut album Killing with a Smile (2005). The album was recorded in two weeks, with its production handled by Killswitch Engage guitarist Adam Dutkiewicz. Killing with a Smile (2005) was quite a hit having the band tour Europe and later return to the US. In early 2006, bassist Shaun Cash left the band citing personal reasons with his position taken by Jia O’Connor, a longtime friend to the band.

The band signed a recording contract with the giant label Epitaph Records in June 2006. Parkway Drive returned to the studio working with Adam Dutkiewicz to release its sophomore album Horizons (2007). The album would set the benchmark for albums to follow, debuting at number six on the ARIA Charts. Parkway Drive was willing to put in more effort in releasing songs to keep the band’s fans entertained. Hence, the band tagged producer Joe Barresi to work on its third studio album Deep Blue (2010). Vocalist Winston McCall put it on record that Deep Blue (2010) remains the band’s heaviest and rawest album to date. The band had tagged Brett Gurewitz of Bad Religion and Marshall Lichtenwaldt of The Warriors in “Home Is for The Heartless” and “Hollow,” respectively.

Parkway Drive was nominated for an ARIA Award in the newly created category, Best Hard Rock, Heavy Metal Album. Deep Blue (2010) won the award, gifting Parkway Drive its first win since entering the music industry. The band also received an Australian Independent Record Award for the Best Independent Hard Rock or Punk Album in 2010, thanks to Deep Blue (2010). Vocalist Winston McCall had his magnificent vocals land him a vocal role in “Panic” by The Warriors and “Time Is Money” by You Me at Six in 2011.

The band has since then released three more studio albums. Parkway Drive has also gone on multiple tours performing alongside acts like August Burns Red, Fit for a King, Knocked Loose, and The Devil Wears Prada. While Parkway Drive might be primarily a metalcore act, the band features deathcore and heavy metal elements in its music.

The band’s songs are mostly delivered in awe-inspiring guitar riffs with breakdowns and screaming vocals. However, Parkway Drive started incorporating clean vocals from the band’s bassist Brett Versteeg in some songs since the album Ire (2015). Parkway Drive revealed that Metallica, Iron Maiden, Killswitch Engage, The Dillinger Escape Plan, Rage Against the Machine, and Slayer influenced the band’s sound. Here we give you our top 10 Parkway Drive songs of all time.

Ushering us to the top 10 Parkway Drive songs is the effervescent hit “Boneyards.” One thing that stands out from the song is its flawless blend of growling vocals and almost-perfect instrumentation from the band. “Boneyards” oozes energy showcasing the band’s great musicianship in the album Horizons (2007). The impeccable metalcore vibe of the song shows great production skills by Killswitch Engage guitarist Adam Dutkiewicz.

“Sleepwalker” gives us a taste of the heavy feel of the band’s album Deep Blue (2010). The song’s lyrics showcase societal isolation in urban areas and the mental health issues that may result from the isolation. “Sleepwalker” also showcases how revolutionary processes such as automation and optimization of the economic and bureaucratic processes are a visionless ambition having them rob some human’s a living. Again, Parkway Drive establishes itself as a talented metalcore act with its instrumentation which stands out from many bands in the metalcore scene.

The Aussie metalcore act Parkway Drive released the hit “Wishing Wells” as the opening track to the band’s studio album Reverence (2018). “Wishing Wells” comes after the band enjoyed success through its critically acclaimed studio album Ire (2015). The song opens with ominous vocals and evocative guitar riffs progressing to deliver lines intertwined with feelings of grief. Parkway Drive vocalist Winston McCall revealed that the song is about looking for something to blame as a manner of coping with atrocious events.

“The Void” carries on with quite a similar theme as “Wishing Wells,” with the two songs featured on the band’s album Reverence (2018). Vocalist Winston McCall revealed that the song alludes to the emptiness we put faith in as human beings. He also noted we are prone to creating an intangible reality that creates the social monsters we finally become. “The Void” showcases how we put more value in the intangible reality, failing to replicate the same when it comes to ourselves.

Coming in at number six of our top 10 Parkway Drive songs is the hit “Wild Eyes.” The song is featured on the band’s fourth studio album Atlas (2012). “Wild Eyes” is a song about power and where it is placed. The song is set to exhibit how the current world works, including how a few individuals make the decisions that impact the masses. “Wild Eyes” also shows how the futures of young people are held hostage by selfish leaders. Parkway Drive felt the need to exhibit to the world how people we have trusted to lead us have held the keys to our freedom.

You can almost smell the anger that is exhibited by this hit from Parkway Drive’s album Reverence (2018). The song is about how people are making themselves marketable in crooked ways just to gain attention. Sadly, we fall into mental health issues having the sorrow we created “Prey” on us. Like many songs from the album Reverence (2018), the song takes a dig at human behavior, which leads to self-inflicted pain.

Coming in at number four is the hit “Bottom Feeder.” The song is featured on the band’s album Ire (2015). “Bottom Feeder” proved that Parkway Drive had not lost its aggressive edge that had awarded the band a cult following. Vocalist Winston McCall regarded “Bottom Feeder” as the soundtrack to the band’s existence. “Bottom Feeder” brings the best of the band’s metalcore sound. The song’s melodic vibe and magnificent vocals from Winston add glamour to its overall feel.

Atlas (2012) had several songs that took a dig at the leaders and politicians in government. “Dark Days” is no different, having it stick to that lane. The song alludes to the destruction of the environment, a consequence of governmental greediness. PUP released their version (with different lyrics) of the hit “Dark Days” on their eponymous album. “Dark Days” by PUP is a mid-tempo rock ballad that finds the band singing about surviving through changing environment and tough times.

Parkway Drive released a song by the title “Crushed” in the album Ire (2015). Vocalist Winston McCall revealed that the “Crushed” represented the band’s continuous musical evolution. The song alludes to the concept of power and control that forms the foundation of modern society. “Crushed” finds Parkway Drive delivering some provocative lyrics on funky guitar riffs that steer the band above the weary metalcore conventions. The song features drumming that matches to industrial metal and nu-metal sounds. “Crushed” has its sound compared to some songs by Rage Against the Machine.

Number one on our top 10 Parkway Drive songs list is the hit “Vice Grip,” featured on the band’s album Ire (2015). “Vice Grip” is the kind of song you hate to see the end! The song brings on so much energy thanks to the awe-inspiring instrumentation and magnificent screams made in backing vocals. Vocalist Winston also offers flawless vocals for this song about overcoming fears and the pressure yielded by growing anxiety from something you wish to accomplish. The accompanying video rhymed perfectly to the song’s theme having the band skydive for their first time, an encounter that had Winston fear for his life but did it anyway!